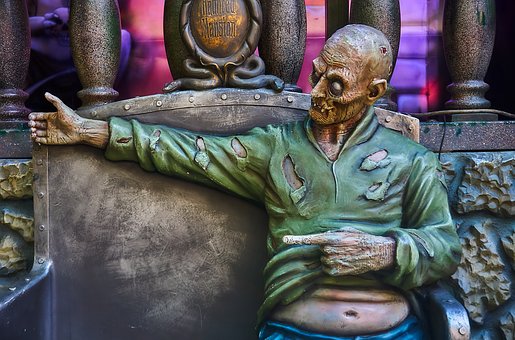 A person can travel around the world in not 80 days, but less than 80 hours. But even if he spends a lifetime, he cannot properly explore every nook and cranny of this planet. That is how huge, how diverse and how wonderful our planet Earth is.

There are all kinds of places on Earth, some creepy, some beautiful, and some both. And with the increasing craze of adrenaline-inducing activities among the masses, all kinds of adventure sports and manmade attractions are cropping up out there.

With that said, here is a list of top 9 scariest attractions in the world in terms of how high your heart rate rises up to:

This famous island is present in every “Creepiest Places Around The World” list on the internet. Isla de las Munecas or Island of Dolls is a tiny island south of Mexico famous for the hundreds of dolls adorning every inch of the island. These dolls are just EVERYWHERE, and they look as if their eyes are following you around. According to legend, one fine day some hundred years ago, the caretaker of the island Don Julian found the dead body of a little girl floating near the coast. And then a few days later, he found a doll floating in water exactly where he’d found the body.

Assuming that the doll belonged to the dead girl, Julian hung the doll on a tree to pay homage to her soul. But allegedly the spirit of the girl kept tormenting Julian to the point of insanity. To calm the spirit down, Julian kept making similar dolls and hanging them all over the island. Finally, after 50 years of hanging dolls, Julian was found dead at the exact same spot as the girl. Ever since the island has become a tourist spot for the lovers of the supernatural. According to the locals, the spirits of the dead girl and Julian possess these dolls. They have reported the dolls moving around and even whispering when night falls. Creepy, isn’t it?

The story and the vibe of this village are somewhat similar to that of the Island of Dolls. Nagoro is a tiny village in Japan where there are more dolls than people. These dolls are so lifelike that an oblivious person will mistake them for real people from a distance. You can see these dolls everywhere, positioned around the village in different ways. They are there in the fields, on the streets, near the river with a fishing rod, and even inside classrooms. All of them are positioned the way they would be if they were actually human.

The story goes back to 11 years from today, when a lady named Tsukimi Ayano came back home from Osaka after many years. When she’d left, the population was around 300, but it dropped to 35 after she came back. Most people had left for cities in search of employment, and the remaining had died from poverty. So to cure her loneliness and inhabit the village, she started making dolls out of straw. Tsukimi is an artist, so the dolls she made were extremely lifelike. She made hundreds of these dolls and placed them everywhere in the village, Today there are more than 400 dolls adorning every nook and cranny of the village. The story behind how they came there is sweet. But the creep factor rises exponentially when you’re walking around the village alone after dark.

The Catacombs of Paris

This place has to be one of the creepiest places on this planet, even though it is now a government-regulated tourist attraction. Paris has a complex underground maze stretching over an area of more than 300 km right below the city. And in the narrow twisted lanes of this maze reside the remains of more than 6 million Parisians. In the 18th Century, when the epidemic plagued the citizens of Paris, the death toll increased at an alarming rate. So much so that even the cemeteries of Paris couldn’t accommodate the dead bodies. The city stank of dead bodies, especially after they littered the streets post floods. To solve this problem, the citizens of Paris started depositing these dead bodies in the underground spy network of Paris. They continued doing this until after WWII when the remains of enemies too were buried along with the rest.

Eventually, when the bodies decomposed, only the bones remained. Now, the Government of Paris has turned the catacombs into a historical tourist attraction. The bones are now arranged in aesthetic structures around the maze. Walking through the quiet, damp and dark lanes of these catacombs is one of the creepiest things one can experience. The catacombs are also made creepier by the fact that a large area of this endless maze is not even mapped. In these unmapped areas operate weird groups and cults of people, and are also dotted with swampy pools. And who knows, you may even encounter a spirit or two from the medieval times!

Aokighara forest, a few miles from the majestic Mount Fuji, is so dense that it is also called the “Sea of Trees”. But this forest also has as many number of suicides credited with it as the number of trees. Every year, more than 100 people willingly give up their lives inside this forest. In fact, some depressed people go to this forest just to commit suicide. This is how the forest got this name. The reason for suicide is assumed to be the melancholy atmosphere of the forest. Aokighara forest is so dense that even sunlight cannot penetrate the leafy canopy at most places.

The darkness accompanied by an eerie quiet, and the compasses rendered useless by the high concentration of iron ores in the ground, makes it very easy to get lost. After wandering around for what feels like an eternity, the only option seems to be death. But that is just an assumption. No one can say for sure that this answers the “why”. Japanese police have hung signs on trees saying “Your life is a precious gift from your parents” to cheer the lost people up. But in vain. The condition is so bad that the government has stopped sending search parties to the forest. They are now afraid that the search party members will get lost too.

The 69 km long North Yungas road is one of the few roads that connect Bolivia’s capital La Paz to the town of Coroico near the Amazon rainforest. And up until 10 years ago, it used to be the only road. This road has been aptly named “Death road”, because hardly ever has anyone made it alive after having traveled on this road. From La Paz, this road climbs up to 4650 meters before rising to 1190 meters. The deadly cliffs, hairpin turns, innumerable landslides, and an inescapable fog makes it one of the deadliest roads on this planet.

Many mountaineers, bikers, and adventure-seekers come to this road lured by the beautiful mountainous terrain that can be seen on the road. But everyone who has come here has paid the price with their lives. Today, the road has been widened and leveled a little to make it less dangerous. New roads have also been constructed between La Paz and Coroico to make traveling less hazardous. But even after all the modifications, North Yungas road is one of the deadliest roads on the planet. Now it is hardly ever used except by the occasional villager or adventurer.

China is home to a number of breathtaking skywalks, but this is the highest and the most exhilarating of all. 4700 feet above the valleys of Tianmen mountain peak stretches this 200-meter long bridge made entirely of glass. This bridge is 3 feet wide and 2.5 inches thick. What makes it so exhilarating is the narrowness of the bridge, its height above the ground. And the fact that you can see the deep valley stretching endlessly right below your feet. Not to mention that the bridge swings to and fro all the time owing to the strong winds at this altitude.

You need not worry though because the glass of this bridge is so strong that it can withstand the weight of two big trucks at the same time. The view from this skywalk is absolutely breathtaking, what with the beautiful snowy mountain peaks all around and the green valleys below. If you love the thrill and adrenaline-inducing activities, this is definitely for you. But not if you are acrophobic. NOPE.

Step Into The Void, Chamonix

This is yet another famous tourist attraction with a mind-blowing exhilaration and thrill factor. Imagine that you have been suspended in the air more than 1000 feet above the ground, and the thrill you will feel at that. This is exactly what you experience at the Chamonix skywalk over the Aiguille du Midi mountain peak in France. This skywalk isn’t just a skywalk, it ends into a glass box protruding from a metal frame set into the mountain right at the peak. One has to travel the entire height of the mountain for 20 minutes in a cable car to reach this glass box.

Once you reach, you step into the glass box (the void), and it is as if you are suspended in the air right above the mountain. From this glass box, one can see everything around, above and below them. The mountainous terrain all around, the beautiful French sky above, and the mountain climbers down below in the breathtakingly beautiful valley. The view is amazing, the thrill factor exceeds all scales of measure, and the mental satisfaction is mind-blowing. What more would an adventurer want?

If you want something less cliche and as exhilarating as sky-diving, this is the perfect adventure sport for you. Zipworld Velocity 2 is a crazy creation of the Zipworld Penrhyn Quarry based in Bethesda, Wales. This zip line is the fastest zip line in the world, reaching mind-blowing speeds of over 100 miles per hour.

Zipworld Velocity 2 provides you the ultimate flying experience, something you can only otherwise experience with sky-diving. There is nothing below you. All that keeps you from falling into the depths of the valley below is the harness that holds you close to the zip line. The zip line stretches for more than a 100 km and takes you along the entire quarry. Imagine coasting down steep valleys and up steeper mountains at neck-breaking speeds for 2 hours straight (yes, one ride lasts 2 hours). What could be more exhilarating than this, and scarier?

This place is literally right out of the mythological stories about the burning pits of Hell. The door to Hell is actually a crater in the Ahal district of Turkmenistan, right in the middle of a natural gas field. Scientists are still trying to solve the mystery behind this crater, which looks like a deep pit of fire. The crater looks like someone has left a lot of coal burning inside it, and now the pit is burning hot, red, and lethal.

It is so hot around the crater that no one can step into or even 5 meters in the vicinity of the crater without a special heat resistant suit. Scientists do not know the exact reason behind the fire. They suspect that it is actually methane gas burning due to the high pressures inside Earth. Turkmenistan is an extremely isolated country, with little to brag about. But the Door To Hell certainly does away with its otherwise isolated state. People from far and wide flock to Turkmenistan for a glimpse of this terrifying crater.

What Makes The Escape Rooms So Exciting?