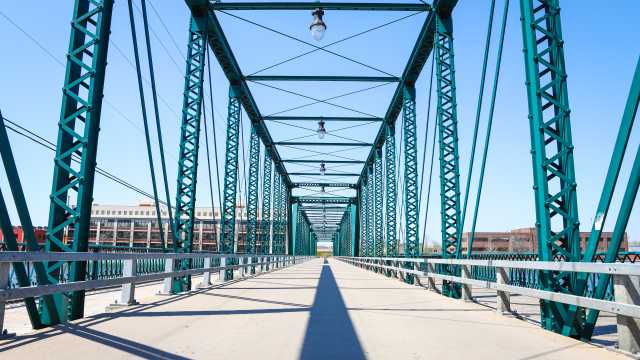 Since ages, bridges have been in use to cross physical obstacles and gaps. It is a structure constructed to connect two places without blocking the way beneath it so that transportation becomes easy and without any hindrances. It can be built over a road, water body or a valley.

Bridges can be made using different materials, designs, architectural methods as per the designer’s vision. There are various parameters upon which bridges are classified. The usual parameters include the materials used, their capacity to hold weight and the design. The most commonly used classifications method is ability to bear weight. Arch bridges, beam bridges, truss bridges, suspension bridges, and cantilever bridges are some of the common types of bridges.

Most bridges have emerged out as distinguishing infrastructures that hold historical and cultural importance. The visual appeal of the famous bridges across the world is one major reason why they garner attraction by tourists all over the world.

The World Famous Historical Bridges across the world:

Before the bridge, the only way to go north from San Francisco to Marin County was by ferryboat. The trip by ferry took 20 minutes to complete. Before the bridge was built, San Francisco was the biggest American city still served mostly by ferries. In 1916, San Francisco’s city engineer asked other engineers to offer ideas for a bridge. Finally, a suspension bridge was designed. A suspension bridge has tall towers that hold long cables, and the cables hold up or “suspend” the bridge. The bridge is called the Golden Gate Bridge because it crosses the Golden Gate Strait, the area of water between the San Francisco peninsula and the Marin County peninsula. It was opened for use in 1937. When the bridge was finished, its length of 9,266 ft (2824 m) made it the longest bridge in the world. No doubt that now, there are several bridges that are longer, but for many people, it is still one of the most beautiful bridges in the world.

The historical Tower Bridge crosses the holy river, Thames. The City of London Corporation held a competition for the design in 1876. Over 50 designs were entered, and in 1884 Horace Jones and John Wolfe Barry’s design was chosen. Workers began to build the Tower Bridge in April 1886 and the bridge was opened in 30 June 1894.
The north side of the bridge is Tower Hill, and the south side of the bridge comes down into Bermondsey, an area in Southwark. Tower Bridge is far more visible than London Bridge, which people often mistake it for. Many tourists go to London to see the Tower Bridge. It has its own exhibition centre in the horizontal walkway. This gives one of the best vantage points in London.

Built very close to the Roman crossing, the Ponte Vecchio, or Old Bridge, was the only bridge across the Arno in Florence until 1218. The current bridge was rebuilt after a flood in 1345. During World War II, it was the only bridge across the Arno that the fleeing Germans did not destroy. Instead they blocked access by demolishing the medieval buildings on each side. On November 4, 1966, the bridge miraculously withstood the tremendous weight of water and silt when the Arno once again burst its banks. Ponte Vecchio is a very romantic spot in Florence, with its great views over the river and of the bridge itself. It is also possible to admire the bridge from underneath in theater presentations, the occasional concert and boat rides.

The largest steel arch bridge in the world, the Sydney Harbour Bridge is an iconic landmark spanning one of the finest natural harbours. Opened in 1932, the bridge is fondly nicknamed the Coathanger by Sydneysiders. You can walk and cycle across the bridge or climb to the top for stunning views. The bridge walk is on the eastern side. You’ll find the stairs up to the bridge walk next to the pedestrian crossing near the Australian Heritage Hotel, on Cumberland Street in the historic Rocks. Along the walk is the south-eastern Pylon Lookout, which offers a spectacular panorama. The iconic bridge took eight years to build using 53,000 tonnes of steel and six-million hand-driven rivets.

Rialto Bridge, Italian Ponte di Rialto, stone-arch bridge crossing over the narrowest point of the Grand Canal in the heart of Venice. Built in the closing years of the 16th century, the Rialto Bridge is the oldest bridge across the canal and is renowned as an architectural and engineering achievement of the Renaissance. It was designed and built by Antonio da Ponte and his nephew, Antonio Contino, following a design competition in the city.

It is a wooden pedestrian bridge that spans Reuss River in the city Lucerene in Switzerland. It has been named after the nearby St. Peter’s Chapel, it was built in 1333 and is one of the oldest wooden bridges in Europe. In the beginning, it had length of over 200 meters, but in time, because of replenishment of banks, it was shortened and now has length of 170 meters. It was built as a part of fortifications of Lucerene. Its purpose was to connect old part of town on the right bank with the new part on the left and to serve as protection from attack that could come from the lake at south.

Since 1883, its granite towers and steel cables have offered a safe and scenic passage to millions of commuters and tourists, trains and bicycles, pushcarts and cars. The bridge’s construction took 14 years, involved 600 workers and cost $15 million (more than $320 million in today’s dollars). At least two dozen people died in the process, including its original designer. Now more than 125 years old, this iconic feature of the New York City skyline still carries roughly 150,000 vehicles and pedestrians every day. The bridge links two boroughs of Manhattan and Brooklyn.

The Alcantara Bridge is a magnificent piece of engineering and was built in the times of Trajan, II century, by the architec Caius Julius Lacer. This important monument has a height of 57 metres, is 214 metres long and 8 metres wide. The bridge is supported on six graceful arches over five big pillars. In the central part is located the Arch of Triumph with some memorial tablets. The bridge is composed by six great archs (some of them are about 30 metres wide) and cover a distance of 214 metres on the Tajo river. The archs are over five big rectangular pillars. The central archs are over 48 metres high over the normal level of water. The road of the bridge is 57 meters high. The Bridge of Alcántara was built about 106 BC by the roman architect Cayo Iulio Lacer on the road that communicates Norba (Caceres) with Conimbriga (now the portuguese city of Condeixa-a-Velha).

Mostar has long been known for its old Turkish houses and Old Bridge, Stari Most, after which it is named. In the 1990s conflict, however, most of the historic town and the Old Bridge, designed by the renowned architect Sinan, was destroyed. The Old Bridge was recently rebuilt and many of the edifices in the Old Town have been restored or rebuilt with the contribution of an international scientific committee established by UNESCO. The Old Bridge area, with its pre-Ottoman, eastern Ottoman, Mediterranean and western European architectural features, is an outstanding example of a multicultural urban settlement. The reconstructed Old Bridge and Old City of Mostar is a symbol of reconciliation, international co-operation and of the coexistence of diverse cultural, ethnic and religious communities.

The Millau Bridge It is the tallest bridge in the world with one of its masts as tall as 343 meters. Its designers are the French structural engineer Michel Virlogeux and British architect Norman Foster.
Every year, traffic that passes from Paris to Spain near the town of Millau becomes jammed with cars that drive people to and from their holidays. First ideas for solving the problem were discussed in 1987 and in 1991, it was decided for a bridge to be built over a valley of Tarn river. From 1993 to 2001, government of France held consultations with architects and engineers, made definition studies and held design competitions until they found appropriate design and the building began. In 1996 Sogelerg consortium proposed cable stayed-bridge that was designed by Michel Virlogeux and Norman Foster. That design was approved for realization. Construction began on 16th of October 2001. First piers were started in January 2002 and finished in November 2003. Roadways were finished on May 2004, pylons and shrouds in the second half of the 2004 and the viaduct was opened on 16 December 2004 – 25 days ahead of schedule. President Jacques Chirac opened the bridge during the opening ceremony.
This bridge broke several records. It has the highest pylons in the world (245 meters and 221 meters), the highest bridge tower in the world (343 meters) and the highest road bridge deck in Europe (270 meters).