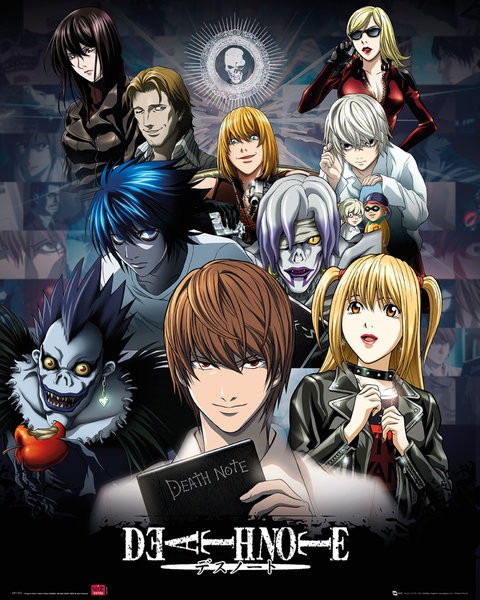 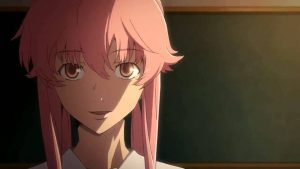 Future Diary, also known as Mirai Nikki follows the life of high school students’ journey. The main protagonist is known as Yukiteru Amano who is thrown into a battle mode and is made to fight for his right to become the new God of both Time and Space.

He is also presented with the gift of a diary which tells him the future events and whatever is going to happen but the twist is, he isn’t the only one who has this gift. There are other participants with the same diary and its power which helps them to understand their opponents move so that they can be attacked and what are the possible attacks coming from them can also be judged.

There is Yuno Gasai whose obsession with Yuki makes her kill everyone who comes in their way. Trust me, watch Future Diary and you won’t surely be disappointed. This is also ranked for one of the most top-watched psychological thriller anime of all time. 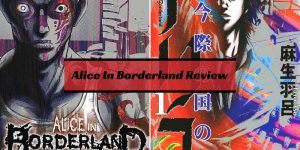 Alice in Borderland also revolves around the life of a high school student called Ryohei Arisu. This series is compelling and fun to watch and also that you are thinking, most of the psychological thriller anime is based on the life of a high school student. Ryohei’s life is meaningless and he wants to find the answer to his useless life through the questions he presents to his will. But one day his life is turned upside down when he is knocked down by a huge firework which challenges both his and his other two friend’s life.

When they come to their senses, they are greeted by a strange being and they realize that they are in a position where they have to fight to live (just like survival of the fittest). Alice in Borderland is a psychological thriller anime which expels your expectation.

There are gore and probable acts which show that humans, when subjected to danger, can extend to any limit for a living. This psychological thriller anime brings out the dark side in people and so it is a must watch. 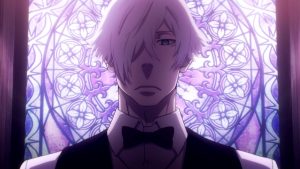 This psychological thriller anime is a treat for all the mystery lovers out there. This anime explores the question of ‘what happens to the human when they die?’ There is a sleek tall bartender who receives people who have nearly departed and asks them to play some games which in turn helps him to decide the fact that who should be sent to hell and who should be reported to heaven.

These games range from blowing darts to building a castle of cards but it tests the players true self and how they treat people even after their death. This psychological thriller anime is set in a dark bar where there are numerous characters to root for. This anime stretches to the end and you can find yourself relating to the characters self and asking yourself questions regarding your own choices that you make.

Since this psychological thriller anime is so good, it is still rated low due to a low number of audience who watches it. 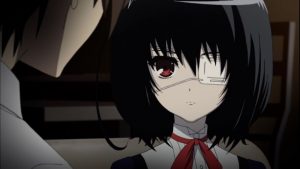 This psychological thriller anime is based in a town named Yomiyama where a student named Misaki has recently passed away. However, still, the students of her class pretend in such a way that she exists between them. Since this will confuse the watchers at first, watch it until the end to understand what truly exists between them is far more terrible and horrendous.

As a horror story, it is extremely predictable since you will find victims falling into traps more easily than usual. As a psychological thriller anime, it is ranked among the best since it engages its audience and lets them deal with the whole story. There are some moments of jump scares but not so intense in nature.

Despite all the negative ailments, another is a good watch into the psychological thriller anime list. 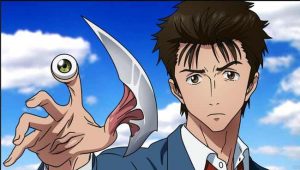 Based on a popular Manga written and illustrated by Hitoshi Iwaaki, Parasyte the Maxim is one of the most constructed psychological thriller anime that I have ever watched. I personally recommended you to watch this series since it is beautiful and enthralling in all the scenes that it captures.

The story revolves around the life of a high school student known as Shinichi Izumi and his simple yet loving family. Since the world is filled with half human- half monsters who have a real deal for the blood of flesh of people, one day Shinichi gets attacked by a Parasyte called Migi but he was lucky to stop it from spreading into his body thus by infecting only the right hand.

This psychological thriller anime is much more than the typical story which builds up all the jump scares and shows the original boss at once. You will start yourself getting involved with the characters. There is one special episode where it follows the death of a girl named Kana and it is so beautifully executed that you will start crying once you see it. This is my personal favorite psychological thriller anime which never disappoints me even though I have binge watched it for the 100th time.

This psychological thriller anime is a good watch for everyone out there. If you are an anime fan and want something captive then give this a go. This series is inspired by several live-action based crime shows and sci-fi detective novels. Psycho-Pass is based on a futuristic era in Japan where a powerful group of network controls the civil society by doing a cymatic scan of their brain.

There are fighting and some action scenes which will keep you at the edge of your seat all the time. This psychological thriller anime is ranked at the top since it has a large number of viewers. People can control a person’s mind and measure or change their attributes for their own advantage. If you are looking for something action packed then this psychological thriller anime is the one for you. 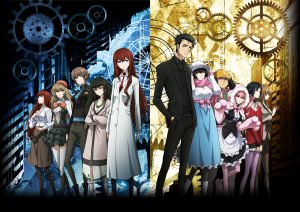 This psychological thriller anime revolves around the life of Rintarou Okabe, a mad scientist who has lost his mind due to the experiments he makes all day. He spends most of the time investing in future gadgets and items which he finds to be useful and believes that they can be used in times of need and crisis. However, Okabe creates a Phone Microwave which transforms its content into a green like gel and only for this innovation, they can learn that with the help of the system they can send messages in the future.

Steins Gate is a top rated psychological thriller anime which follows the scientific adventure and a collection of stories which are really fun to watch. It was first depicted in the Manga but due to its graphic content and awesome writing style, it was made into an anime.

Steins Gate is a must watch psychological thriller anime if you are into time traveling and spooky stories. It also puts a prime focus on its lead and develops a good backstory for all of them. Utilizing the events surrounding the real world, steins gate builds a connection between history and the present itself. 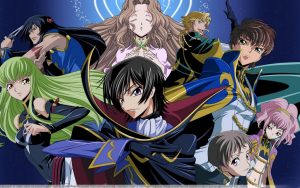 In the year 2010, Britannia has become a world power controlling everyone under them. This psychological thriller anime follows the life of Lelouch and his sister and how they are saved from the attack and bought up to save the future from the cruel leaders. Lelouch Lamperouge is the exiled king of Japan and rules over the people those who have been exiled.

Code Geass is a psychological thriller anime which lets you wanting for more and more and with every passing episode, you will find some cliff-hangers to cling onto by wanting to know what exactly will happen to them. Code Geass is unpredictable and yet a fun watch since the show rides on the power of Lelouch and his ability to control with his sighted power.

This psychological thriller anime promises an interesting plot for its viewers and doesn’t disappoint. The story is soon reflected under Lelouch and his utter rival Suzaku who reflects their both sides and how two persons can be different at the same time.

If you are wanting to watch something good for a psychological thriller anime then this show is a must go in your list. With a show that knows the strength of its design and entertainment, you will find yourself being drawn to it.

A psychological thriller anime which structures the life of Dr. Kenzou Tenma, a famous brain surgeon who has excelled in his field with his proper researches and theories from time to time. However, he faces a critical situation with the choice of saving the life of a child and the life of the mayor when presented. Since he decides to save the child to reason his morals, he finds out that the child he has saved has turned out to be a well-known criminal.

Monster is a psychological thriller anime which lets you understand the true sense of human and how worth it is to dive into our own morals. Monster is a unique way of telling people that the monster we search under our beds is really within us.

The characters are given the strength of life frightening choices and how they are interwoven together makes this psychological thriller anime is a better go for all the viewers out there. 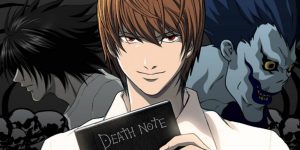 Ranked at No.1, Death Note is the best psychological thriller anime in this whole list which stands out for its execution, direction, storytelling and what not. It follows the life of a high school student called Light Yagami and how he is completely frustrated with the world and how society actually treats its people.

One day Light ends up with a Death Note which has the power of killing people once their name is written on it. Dropped mistakenly by a Shinigami called Ryuk, he is made responsible for his action and the other Shinigamis asks him to take the note back before it is too late. With Light handling the death note, he announces the power of controlling the whole world by declaring himself to be Kira (The killer-God).

This psychological thriller anime is a must-must watch if you are going for something fantastic. Since every bad deed has an end to it, Lights activities are marked by the best detective of all time known as L and he sets out to find the real killer and his reasons of doing these. This psychological thriller anime is just a mere chase between Light and L and how these two intelligent subjects are made the most important plot of the whole show.

Watch Death Note and if you have already completed watching it then watch it for the second time as well. Well, I have watched it more than 10 times.

So what do you think of this list? Well, go for these awesome psychological thriller anime if you haven’t watched them already.

I am sure that they won’t disappoint you for the rest of your weekend.