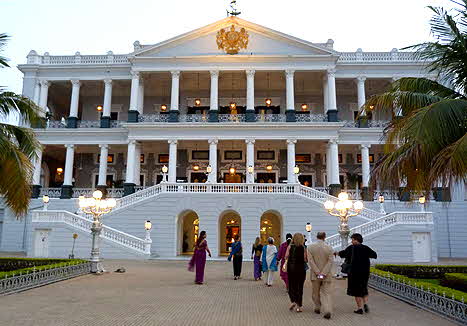 Hyderabad has always been renowned for its Nawabi culture and rich heritage. While tourism in the city has always been associated with visits to the Salarjung museum, Golconda fort, Charminar and other historical landmarks, there was no destination that transported tourists to the era of the Nizams. The Taj Falaknuma Palace fills this void perfectly. It lets guests soak in the regal ambience of the splendid rooms where the Duke of Windsor once sipped his morning tea, walk in the palatial lawns where King Edward VIII strolled, and nurse a drink and cigar where the Nizam took in long puffs from his four-piped silver hookah (which still adorns the Smoking Room). 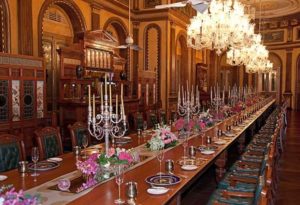 Along with these attractions, there is something very interesting about the palace. Have you ever seen a dining table that can accommodate 101 people? Yes…that is what is an asset to the palace.The dining table, at the Falaknuma Palace is a reflection to the royal ambience of the Nawabs.

Let us check out its attractions one by one.

History of the Palace

In 2010, the Taj group of hotels took the palace under lease from the Nijam family and named it as Taj Falaknuma Hotel. Now, this is a rich, ambient five-star hotel. Celebrities like Sachin Tendulkar and Kareena Kapoor had their food on this table during the inauguration of the hotel. 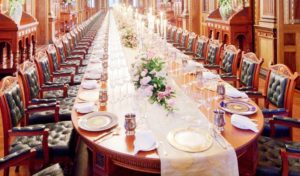 Is it available to the common man?

Don’t be in a illusion that the palace is only for royal families and special guests! The Taj Falaknuma hotel also provides its services to common people. You can eat whatever you want with no limits. Ofcourse, there are certain conditions.

So, this is the reason why the Government of Telangana organizes food  for its special guests at this palace, so that they enjoy the place’s royalty. If you are planning a visit to Hyderabad, then make sure Falaknuma palace stands in the list and enjoy the royal dinner!!