The fifth most populous state of Andhra Pradesh, Kurnool is a nice place to make a trip. Often called as Gateway of Rayalaseema, Kurnool was the capital of united Andhra before Hyderabad. A major part of the famous Nallamala forests lies in this city. Along with a wide range of flora and fauna, these forests are also a home for many tourist attractions.

Kurnool is a place for many pilgrim centers. Each place is famous and different in its own way. Each of them gives a different experience on visiting. The best time to visit Kurnool is between November and February. Here is a list of different places that you should definitely include in your travel plan to Kurnool. 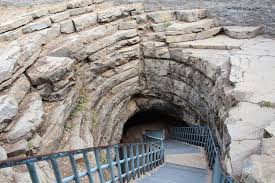 Belum caves are the second largest naturally formed caves in the Indian subcontinent. Before the exploration, these caves were used to dump wastes by the local people of the village, Belum. After restoration, which took almost two decades, today, Belum caves are one among the centrally protected monuments of national importance. 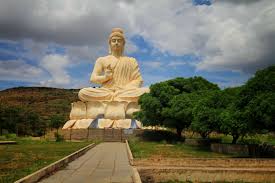 Till date, only one and a half kilometer of the caves are accessible to the tourists. At one point, the caves go as deep as 46 meters, where an underground stream known as Paatalaganga flows. The water here flows continuously throughout the year. It is a mystery where this water comes from. The caves consist of galleries, a meditation den, a saint’s bed and relics of monks dated back to 4500 BC. Outside the caves, a gigantic, forty feet high statue of Lord Buddha has been installed in the memory of the monks who spent their time meditating here. There are many eye-catching naturally carved structures that will make you awe-struck and admire the beauty of Nature.

The caves are at a distance of 110 kilometers from the Kurnool headquarters. People with a weak heart, asthma and other breathing issues are not allowed into the caves.

One of the famous temples in South India, Ahobilam has a great history. The place is related to the ‘Narasimha Avatara’ of Lord Vishnu. According to the local people, it is believed that this is the place where King Hiranyakasipu was killed by Lord Narasimha. There is a rock called ‘Ugra Sthambham’, which is supposed to be the one from where Lord Narasimha has come to prove the presence of God everywhere, on Prahlada’s request.

The main deity is on the hill, referred to as Upper Ahobilam. Regular pujas are held here with the flowers that grow on the same hill. The lower Ahobilam has some temples and also residences of the priests working there. The place is also called as ‘Nava Narasimha Kshetram’. It has nine different idols of the Lord at different places. People can go on a trecking trip to visit all the idols with the help of a guide. Tracking here is a real fun. 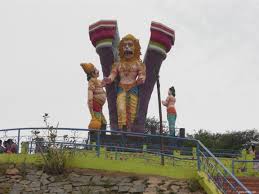 The place is at a distance of 135 kilometers from Kurnool. Many public and private transport are available to reach the place.

The Orvakallu rock gardens is a famous tourist spot in Kurnool. The igneous rock formations are such a beauty. This is the best place for photography. The place has a restaurant, cave museum and small ponds with boating facilities. People can also enjoy rock climbing at the garden. It is a recreation center for people of all ages. 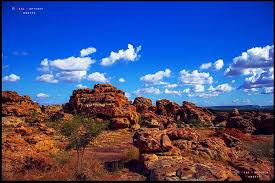 It is at a distance of 20 km from the Kurnool headquarters.

Famous for many beliefs, Yaganti is a place where Lord Shiva is worshipped as Ardhanaareeshwara. This is the place where the Telugu saint, Sri Pothuluri Veerabrahmendra Swamy has written the most famous Kala Gnana, a book which predicted many instances of the future. The highlight is that many of the predictions that he noted, are coming true. 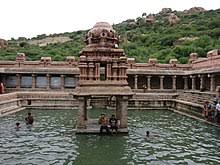 The giant idol of Nandi, here is said to increase in size every year. This was also proved by the archeological department. Another interesting fact about the place is that we never see any crows in this area. It is said to be because of a curse by sage Agastya to Kakasura, king of crows. There is a pushkarini, a sacred water body, where people can take a bath and then proceed for the darshan. 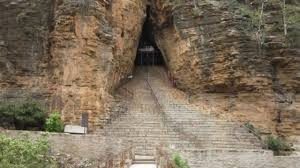 This place is at a distance of 70 km from Kurnool. Yaganti is close to a village called Banaganapalle, where special mangoes are available. Kurnool is worldwide famous for these mangoes.

Located in the border of Karnataka and on the banks of the river Thungabhadra, Mantralayam is a holy town with Guru Raghavendra Swamy as the worshipping idol. This is the place where the Guru has attained Siddhi by entering into Samadhi alive. The Guru was a Madhwa saint. Even today, many people in Karnataka follow the guidelines of the Guru. They are called Madhwa Brahmins. 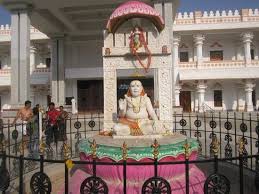 Here in Mantralayam, you can have the Bridavan(Samadhi)darshan of the great Saint and his descendants. It is believed that the Guru here, has a very great power and can fulfil the wishes of his disciples. There is also a Hanuman temple nearby, where the Lord is seen with five faces.

This place is at a distance of 74 km from Kurnool district. Regular buses are available. People are allowed into the temple only with traditional wear. Men should be in their dhoti with no upper garments, while women can wear a saree or a decent Punjabi suit.

Surrounded by thick forests, Mahanandi is famous for the Mahanandishwara temple and the nine Nandi shrines. The noticeable feature here is the pushkarini, a sacred water body whose water is crystal clear and has a continuous flow throughout the year. The water management of the pushkarini is brilliant. The inlet and outlet of water are in such a way that the water in the pushkarini always remains at a height of 5 feet. So people can happily take a dip in the holy water.

Since the whole area is amidst forests, it is a peasant environment to chant the Lord’s name. Outside the temple, there stands a huge statue of Nandi which is an added attraction to the place.

This is located at a distance of 93 km from Kurnool. Apart from the main pushkarini, two other small ones are located outside the main temple, which act as swimming pools for small kids.

Reputed to be one of the most ancient temples of India, Srisailam is located on the top of nallamala hills. It has been a popular Saivite pilgrimage center for centuries. This holy place is considered as one of the twelve Jyothirlangas of Shiva and also one of the eighteen Shakthipeetas of Goddess Parvathi.

The idol of Shiva is worshipped as Mallikarjuna while that of Parvathi as Bhramaramba. Every year many people from all over South India visit this place to seek their blessings. Srisailam is again a package of temples. The Ganesh idol at Sakshi Ganapathi temple is said to act as an evidence to Shiva to prove the devotee’s visit. The Shikhareswara temple is the place from where people can make darshan of the temple’s highest point.  It is believed that whoever gets to see the Shikhara(the highest point) will not have the next birth. 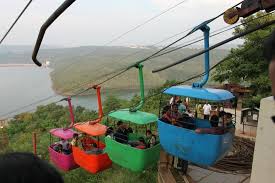 Then there is Ishta Kameswari temple. The road journey to reach this temple is quite challenging. Only special jeeps are allowed to travel. The Srisailam dam is the 2nd largest capacity working hydroelectric station in the country. There is a facility of Ropeway and boating available in the dam water.

Srisailam is at a distance of 180 km from Kurnool. Lodging facilities and good transportation are also widely available.

At the heart of Kurnool city, the Kondareddy fort stands magnificently as a symbol of pride and valour. The modest looking structure, once housed a tunnel that passed from under the Tungabhadra river and still holds a majestic tower, looking over to the city that grew around it. 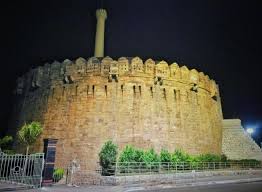 It is one of the highlights of the city and has been a landmark for Kurnool since ages. The fort is now a Universal Heritage site, discovered by UNESCO.

It is just at 2 km distance from the railway station and can also be noticed from a certain distance. Going to Kurnool and not visiting this fort has no meaning!

For all the nature lovers and bio-diversity enthusiasts, a day in Rollapadu will be worth it. There is a large and diverse species of flora and fauna. Rollapadu is one of the finest grasslands in the world. It is the habitat of one of the most endangered species of The Great Indian Bustards. 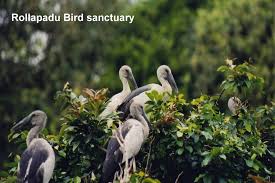 It is at a distance of 45 km from the headquarters.

With hills surrounded everywhere and amidst the pleasant environment, Gargeyapuram lake is a new tourist attraction in Kurnool. The boating facility is also made available to the visitors, where they can enjoy the Nature, travelling happily in the boat. It is also a recreation place and is the best place for small family get- togethers. 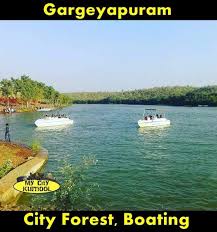 This place is at a distance of 12 km from the main city.

So these are some of the most important places to visit in Kurnool that are definitely to be on one’s list. If you want to enjoy your journey with the locally famous foods, then here is the list:

So, if you are planning a trip to Kurnool, make sure you definitely do all these things and make your trip satisfactory.

Have a happy trip!!