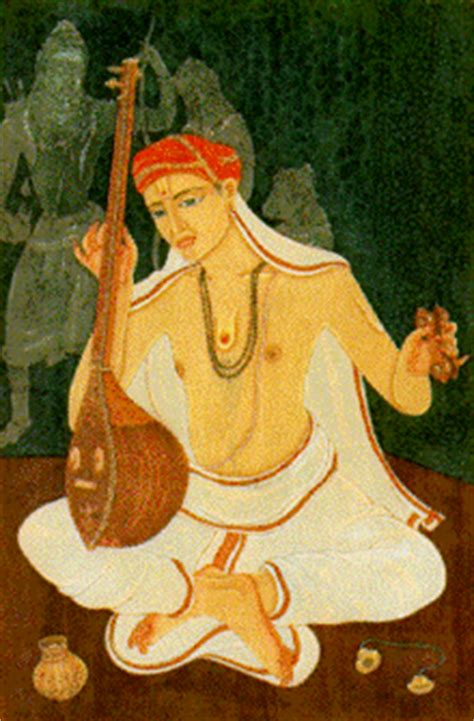 Kakarla Tyagabrahmam (4 May 1767 – 6 January 1847) or Saint Tyagaraja, also known as Tyāgayya in Telugu, was one of the greatest composers of Carnatic music, a form of Indian classical music. He was a prolific composer and highly influential in the development of the classical music tradition. Tyagaraja and his contemporaries Syama Sastri and Muthuswami Dikshitar were regarded as the Trinity of modern Carnatic music. Tyagaraja composed thousands of devotional compositions, most in Telugu and in praise of Lord Rama, many of which remain popular even today and sung at the Thyagaraja Aradhanotsavam every year. 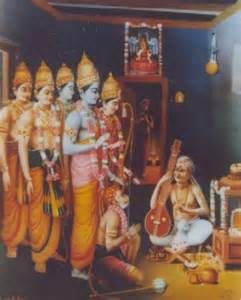 Aradhana means to offer.Tyagaraja Aradhana is an annual Carnatic music festival usually held once in a year during January and February in Thiruvaiyaru, the birth place of the great saint Tyagarajar Many experts of Carnatic music gather here to perform music, and is watched by millions of fervent fans of Indian classical music. To pay a common homage to the saint, Five pancharatna keethanas are selected and sung by all the musicians. As a mark of respect and thanksgiving to the saint, Carnatic musicians from all over the world get together and pay their reverence to the Saint by singing the Pancharatna kritis on the Pushya Bahula Panchami – the day when he attained Samadhi. This is an integral feature of the Aradhana. 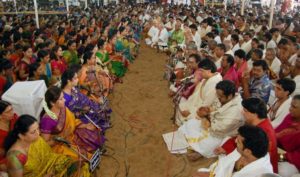 THE CULTURE OF THE FESTIVAL

When Saint Thyagaraja passed on, his mortal remains were buried on the banks of the river Kaveri and a small memorial was built at the site. His disciples returned to their respective villages and observed his death anniversary at their own homes. The memorial soon fell into neglect and had become quite dilapidated by 1903, when two of the last surviving students to have been taught by Tyagaraja happened to make a nostalgic visit to the site. These were the elderly and eminent musicians Umayalpuram Krishna Bhagavatar and Sundara Bhagavatar. They were dismayed by the neglect and dilapidation; indeed, they had to search for the memorial in the wild foliage of the riverbank. They arranged for the renovation of the samadhi and decided to commemorate the tithi or death anniversary of their guru every year at the Samadhi itself.
In fact, until 1907, there were no music concerts but only religious rituals, during the aradhana. In 1908, it was Narasimha Bhagavatar and his younger brother Panchu Bhagavatar, disciples of Thillaisthanam Rama Iyengar (‘antharanga sishya’ of saint Thyagaraja) who held a five-day aradhana festival that included harikathas and concerts. The music concerts are now presided over by Sri Thyagabrahma Mahotsava Sabha based in Thiruvaiyaru. The religious part of the Vaidika aradhana celebrations that began during the time of Thillaisthanam Rama Iyengar is continued even today by a Trust called ‘Sadguru Tyagabrahma Aradhana Kainkarya Trust, Madras,’ formed in 1984 by Chellam Iyer, S. Parthasarathy and a few others of the Thillaisthanam tradition. Thiruvaiyaru is situated 13kms from Thanjavur (Tanjore) in the state of Tamil Nadu. 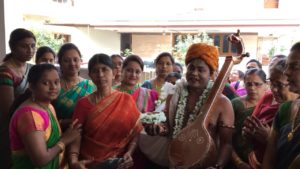 This picture depicts the trust and divinity of people towards Saint Thyagaraja. Many people perform many such activities to seek the blessings of the saint, so that they could get the holy showers of the Almighty as well. This is the live picture of the music enthusiasts who had performed a “Nagara Sankeerthanam” on the eve of the saint’s death anniversary.

Where ever may the Thyagaraja Aradhanotsavam be held, the main motive of this fest is to protect the great compositions of Thyagaraja and share it with the future generations.The Pancharatna Kritis sung at the fest are:

The melodic forms of these compositions (Nata, Goula, Arabhi, Varali, Sri) are the five Ghana ragas of Carnatic music also called the ghanapanchaka. These 5 ragas lend themselves to elaborate improvisations. They are so called because they are suited for playing tanam on the veena. Nata and Varali are the most ancient of the Carnatic ragas and date back to over a thousand years ago.

Today, thousands of people from all over the world attend this great musical festival to commemorate the Great saint and get lost in the divinity of music. The sacred sounds ringing around the area make the area pleasant and hence satisfy the music lovers.