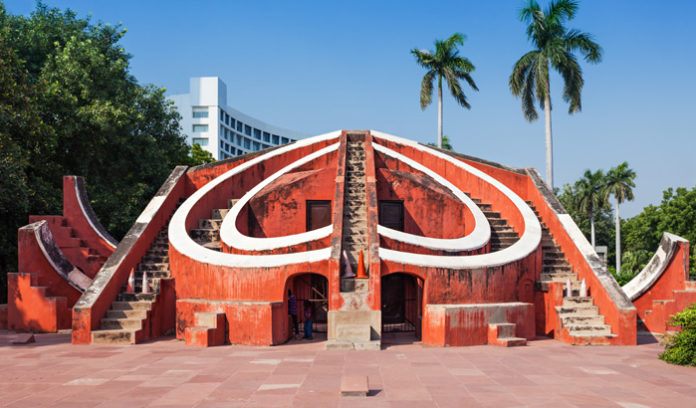 Jantar Mantar is the one of the mathematical place in india. The word Jantra is derived from yantra, instrument, while the suffix Mantar is derived from mantrana meaning consult or calculate.The words jantar and ‘mantar (or yantra and mantra) means calculation instrument.

Jantar mantar also know as the equinoctial sundial.Because it consists gigantic triangular gnomon which having the hypotenuse parallel to the Earth‘s axis.There is a quadrant of a circle, parallel to the plane of the equator on the either side of the gnomon. So this is used to measure the time of the day.

In india there are 5 jantar mantar and from those largest one is Jaipur Jantar mantar.

In the 18th century, Maharaja Jai Singh II of Jaipur constructed five Jantar Mantars. In places like New Delhi, Jaipur, Ujjain, Mathura and Varanasi. They were completed between 1724 and 1735.

The jantars have evocative names like Samrat Yantra, Jai Prakash, Ram Yantra and Niyati Chakra; each of which are used to for various astronomical calculations. The primary purpose of was to compile astronomical tables, and to predict the times and movements of the sun, moon and planets.

It name was inscribed on the UNESCO World Heritage Site. The construction was completed in 1734 CE.The features of this stone and brass instruments that were built using astronomy and instrument design principles of ancient Hindu Sanskrit texts. This monument operating in each of the three main classical celestial coordinate systems:

To transfer from equatorial  to elliptical the Kapala Yantraprakara is used. The Kapala is an instrument which has been described in the suryasiddanta.

The monument was damaged in the 19th century. Restoration work was undertaken by the Major Arthur Garrett, a keen amateur astronomer, during his appointment he was the  Assistant State Engineer for the Jaipur District.

Jantar mantar was built by local stone and marble. Each instrument having  an astronomical scale. It was marked on the inner lining of the marble. Bronze tablets, bricks and mortar were also used in building the instruments. Area of the monument is about 18,700 square metres. In 20 th century the original materials are used for the reconstruction of the monument.

four semicircular arcs on which a gnomon casts a shadow, thereby giving the declination of the Sun at four specified times of the day. This is equivalent of a wall of clocks registering local times in different parts of the world.

a pillar in the middle of two concentric outer circles, used to measure azimuth of the sun, and to calculate the time of sunrise and sunset forecasts.

observe and find the location of pole star with respect to other celestial bodies.

two hemispherical bowl-based sundial with marked marble slabs that map inverted image of sky and allows the observer to move inside the instrument, measures altitudes, azimuths, hour angles and declinations.

measures coordinates of celestial bodies in azimuth and equatorial systems, any point in sky can be visually transformed from one coordinate system to another.

the smaller sundial at the monument, inclined at 27 degrees, to measure time, less accurate than Vrihat Samrat Yantra.

a double cylinder instrument that measures azimuth and altitudes of celestial bodies.

12 gnomon dials that measure ecliptic coordinates of stars, planets and all 12 constellation systems.

next to Vrihat Samrat Yantra, this instrument is a 60 degree arc built in the meridian plane within a dark chamber. At noon, the sun’s pinhole image falls on a scale below enabling the observer to measure the zenith distance, declination, and the diameter of the Sun.

a metal ring divided into four segments by horizontal and vertical lines, with a hole in the middle; the position and orientation of the instrument allows measurement of the altitude of celestial bodies.

a 2.43-metre bronze astrolabe, one of the largest in the world, used only once a year, calculates the Hindu calendar.

The Jantar Mantar is located in the modern city of New Delhi. It consists of 13 architectural astronomy instruments. The construction was completed in 1724.

The theories behind the instruments are found in texts by the 5th century CE Aryabhatta, 6th century CE Brahmagupta and Varahamihira, 9th century Lalla, 11th century Sripati and Bhaskara.