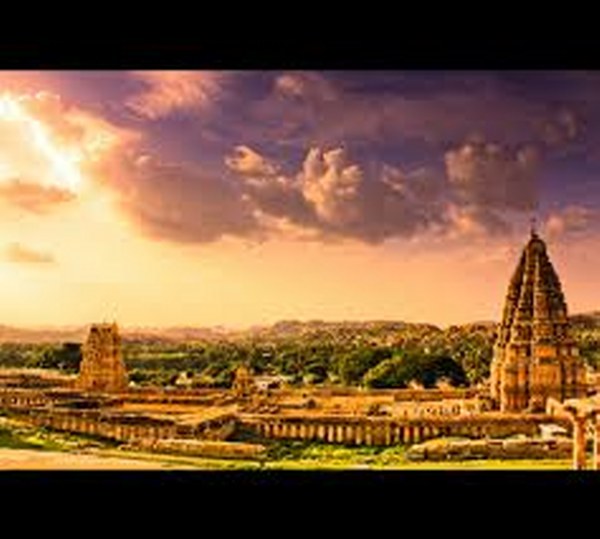 Hampi is a UNESCO World Heritage Site in India located near Hospet town in the Karnataka state, India.

History of the Chariot 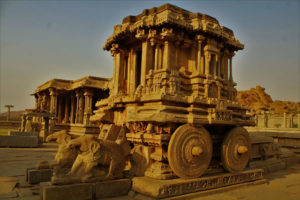 The chariot was built by King Krishnadevaraya of the Vijayanagara Empire during the 16th century, who got fascinated with the Konark Sun temple chariot while fighting a battle in Odissa. The chariot is meant to represent the beauty and artistic perfection of the Empire. An interesting folklore emanates from the Hampi chariot as villagers believe that the world would come to a halt when the chariot moves from its place. It has come to have a sacrosanct presence and is internationally recognized as a world heritage site even by the UNESCO.

The Musical Pillars Of The Ranga Mantapa 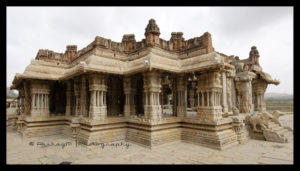 The large Ranga Mantapa is well known for its 56 musical pillars. These pillars are also known as SaReGaMa pillars, which are attributed to the musical notes emerging out of them. The musical notes can be heard when the pillars are gently tapped. One can find a set of main pillars and also several smaller ones at the mantapa.

Each pillar provides support to the ceiling of the mantapa, and the main pillars are designed in the manner of musical instruments. Every main pillar is wrapped by 7 minor pillars and these minor pillars emit different musical notes. Every note coming out of these pillars vary in their sound quality and also change as per the percussion, string or wind instrument being played. 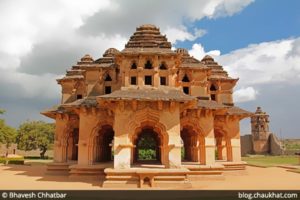 The Lotus Mahal was a part of Zenana enclosure, a place where royal families of Vijayanagara Empire resided. Lotus Mahal designed as a palace for royal ladies of those times to mingle around and enjoy recreational activities. The Mahal also served as a meeting point for the king and his ministers.

It is said that the Queen of Krishna Deva Raya used to spend her most of the time seeking pleasure and peace in the palace. The palace also served as a meeting point for the king and his ministers. Kaml Mahl is also referred to as a council chamber in the maps found in 18th century. Kamal Mahal and Chitrangini Mahal are the other names by which it was known earlier. Several musical concerts and other recreation activities were held at this place. 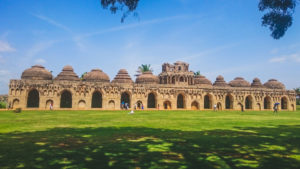 The Elephant Stable in Hampi is an impressive structure that was used to provide shelter for the royal elephants of the Vijayanagara Empire. The elephant stable is located in the area that lies just outside the Zenana Enclosure.

It is one of the very few structures that have not suffered extensive damage during the Mughal attack on Hampi that led to the downfall of the Vijayanagara Empire in 1565 A.D. The ancient stable is a major attraction among the tourists even today. The elaborate structure indicates the importance attached to the royal elephantsduring those days. It also suggests towards the amazing craftsmanship of the artisans of that era. 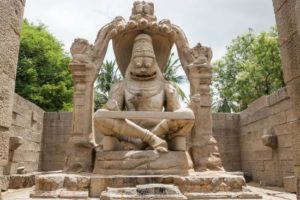 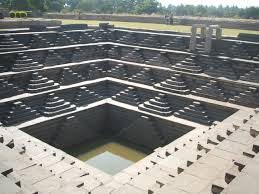 The Queen’s Bath in Hampi is a colossal bath that exemplifies the architectural excellence prevalent during the days of the Vijayanagara Empire. It is located close to the entrance of the Royal Enclosure in Hampi.

Constructed during the reign of the Vijayanagara Empire, the Queen’s Bath impresses visitors even today, more than 500 years after it was built.

The Queen’s Bath is believed to be constructed by Achyuta Raya for the women of the royal family of Vijayanagara. Though named as the Queen’s Bath, it was in all probability used as the private bathing chamber of the king and his queens. It is also believed that the lavish bath was a royal pleasure complex. This belief is due to the location of the bath, which is outside the Royal Enclosure. 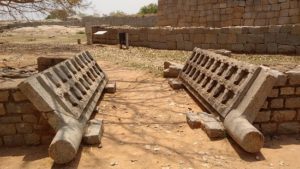 The Stone Doors in Hampi are an impressive pair of monolith doors that were once part of one of the entrances of the Royal Enclosure in Hampi.

Located near the Mahanavami Dibba platform in the Royal Enclosure, the remarkable stone doors are believed to be a part of the imposing fortification of the enclosed area during the period of the Vijayanagara Empire.

The stone doors are one of the prominent remnants of the Vijayanagara period that can be seen among the ruins in Hampi. Though the huge doors are no longer attached to any structure and are not functional in any way, they do not fail to capture the interest of the visitors. 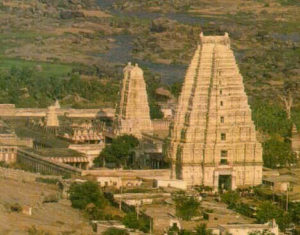 Virupaksha Temple is the main center of pilgrimage at Hampi, and has been considered the most sacred sanctuary over the centuries. It is intact among the surrounding ruins and is still used in worship. The temple is dedicated to Lord Shiva, known here as Virupaksha, as the consort of the local goddess Pampa who is associated with the Tungabhadra River. There is also a Virupakshini Amma temple (mother goddess) in a village called Nalagamapalle, Chittoor district, Andhra Pradesh, approximately 100 km from Tirupati.

These are some of the most interesting sites to visit in Hampi. Apart from these, there are many other places which will make you get lost in its spendour. So , who ever is fascinated towards ancient architecture , should definitely make a visit to Hampi  atleast once in a life time.