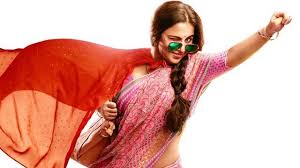 ‘Tumhari Sulu’ is an upcoming Bollywood movie, which has actress ‘Vidya Balan‘ in the lead role. Directed by Suresh Tiwari, the movie appears promising as Vidya has time and again displayed her acting prowess. The trailer has already garnered huge attention which has piqued the curiosity of cine-goers. 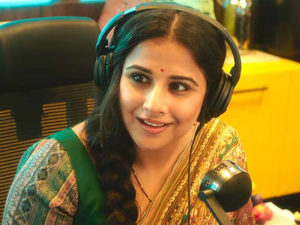 This slice-of-life movie is about a middle aged woman who is a cheerful person by nature. Her life changes entirely when she gets a job offer for night-time Radio Jockey. The songs of the flick seem perfectly in synchronization with the aura of the film. Every other stuff of the movie, be it costumes, make-up etc. is appearing on point (as suggested by trailer).

Through the teaser of this movie, first look of Vidya Balan was unveiled to her fans in September 2017. She was seen in a ‘regular housewife avataar’, draped in regular saree and a plated hairdo. Her look completely signified the ‘Indian woman’ whom we encounter now and then on our daily basis. Despite of such non-glamorous look, the actress commands our attention due to the honesty which she seemingly has for the role in the movie.

The trailer of the movie has gained appreciation at a very quick pace. It showed how this happy-go-lucky lady (Vidya as Sulochana) believes in living a joyful life. She is seen talking in naughty tone to her callers as R.J. which packs laughter. The story of the movie is largely clear from the trailer itself but even after that there is a lot more that the flick has to offer.

Even before the movie is released, the flick is appearing a hit for Vidya Balan. Since the actress has always justified all kinds of roles she had played, her natural performance in this upcoming flick also seems promising. The movie will be released on 17 November 2017!