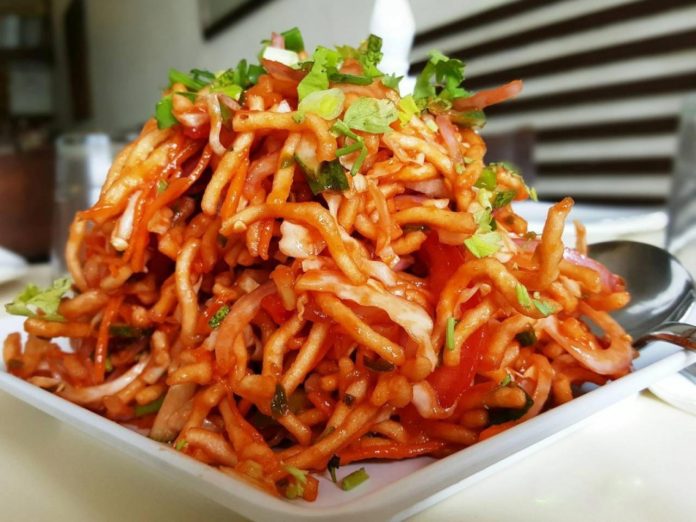 A street-style recipe, super easy to make yet tastes so appetizing and tempting. Chinese bhel is a variant of chop suey, widely popular in the streets of Mumbai. Basically, it’s a food item from North-Eastern origin in India. This savory street food is usually made from deep-fried noodles, finely chopped onions, perked with shredded cabbage, crunchy veggies like sliced capsicums, carrot, spring onions, soy, tomato, and red chili sauce mixed in different proportions. It comprises of spicy-sweet distinct flavors with tongue-tickling seasonings from various oriental sauces that are being mixed. This popular roadside snack is super quick and easy to make that you can hop onto anytime. The peppy Chinese flavors that are infused in this version of bhel taste so tempting and delicious.

These days the fried noodles are easily accessible, however, you can even make them at home with the Hakka or the Maggi noodles. Once you have this ready on your countertop, the rest work is just to chop all the veggies and toss all of this with the sauces. This snack requires no cooking as such. But, here I have turned up with its two super yummy variants. One is the cold version and another is the hot version. Both of these two variants look somewhat the same although, they have their diverse flavors as the former one (cold) is served just after being tossed, while the later (hot) is served hot right away from the wok. Let’s dive into the recipe to make this mouth-watering treat in absolutely street style.

For making the crispy fried noodles

After frying all the noodles, divide the whole into two equal parts for making the Chinese bhel in two variants. Let’s start with the first variation of Chinese bhel.

For making the Cold Variation of Chinese bhel

Now, moving on to our second variant of hot and spicy Chinese bhel.

For making the Hot variation of Chinese bhel

While tossing, drop in the fried noodles in the end for both the variants. As the crispy noodles turn out to be soggy after some time, so be a bit quick while mixing everything and serve immediately. Do try out these two amazing variants of making the popular street style Chinese bhel. These are super easy and quick to make and a perfect go-to evening snacks for your weekends. Usually, you can stock up up the fried noodles in an air-tight container for about a week or 10 days. If you have the fried noodles ready, then it gonna take max 3-5 minutes to toss-up everything and dive into this delicious treat.