“Tarzan” the epic story of a child raised by the gorillas in a jungle, is an all time favorite childhood story. Tarzan falls in love with a beautiful girl name Jane. It has been years since Tarzan left the jungle of Africa, where he was raised by gorillas.  He left the jungle for a gentrified life in London, with his beloved wife Jane. The movie, The Legend of Tarzan narrates a story of the Tarzan accepting an invitation to go back to Africa. Tarzan is unaware of the fact that he is getting into a deadly snare of greed and revenge. 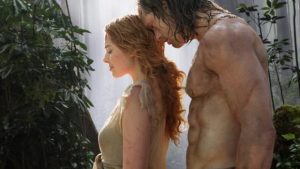 The Legend of Tarzan is distinct from the previous movies of Tarzan. This time Tarzan is in a brand new avatar with action-pack trailers. The film is written by Adam Cozad and Craig Brewer. Directed by David Yates and created by Edgar Rice Burroughs. Alexander Skarsgard plays the title role as Tarzan. Margot Robbie is the leading lady of the movie. The Legend of Tarzan is the most-awaited Hollywood movie of 2016. The film is an American action adventure film based upon a fictional character of Tarzan. The supporting actors in the lead roles, Samuel L. Jackson, Djimon Hounsou, Jim Broadbent andChristoph Waltz.

The director and the cast surmise that the movie was a hit from the moment it was written. David Yates exclaims that initially the script mesmerized him and everyone who laid eye on it. The director states that he was surprisingly smiling while going through the script. The script has a contemporary aspect with a question, how do we value our environment? In order to give the movie the accurate history and authenticity David Yates had spent weeks with the experts out in the Africa.

The producer David Barron ardently describes how modern technology assisted the exceedingly talented film crew to knit together the real life scenes of Africa with exceptional animation. David Barron added that the movie is different from the previous movies. The split between the movies highlights the ambition of the epic movie. The movie is thematically rich and geared towards a global audience.

Alexandra Skarsgard says he had large and exciting experience working with the animal behaviorists. He says it was really a challenge to learn how to feel like an animal and morph into an animalistic posture naturally. It was not easy for Skarsgard to get into the character mentally. Alexandra worked along with the voice specialist to learn the infamous Tarzan yell. He tried different versions even yodeling to reach the primal level of the true king of the jungle.

Margo Robbie says the movie is a captivating romantic movie. Robbie is playing the role of Jane, who is a fiercely independent character. Jane is madly in love with her husband Tarzan. The jungle boy is incomplete without his wife Jane. Jane is emotionally strong as Tarzan is physically strong.

The movie will have a grand release on July 6. The movie focuses on wild life and environment preservation. The team of the movie along with international NGO will tackle on world’s prominent conservation challenges. They would propagate the message of saving the world’s elephant from extension. The movie should not be missed watching.