A single day more for Udta Punjab to hit the theaters with a BANG! The movie has been in a raging controversy since several days. The title Udta Punjab means “Flying Punjab.” The movie pictures drug menace in the state of Punjab. The movie has been a hub for the Central Board of Film Certification for some time. The movie focuses on the darker realm of the state Punjab in the present era. Speculations are in the air that the movie could hurt the sentiments of the Punjabis. It could also affect the peaceful atmosphere of the state. Eventually, government of the state is getting involved in pondering and making comments on the movie.

After being mum for several days, the Chief Minister of the state Shiromani Akali Dal (SAD) and the Deputy Chief Minister Sukhbir Badal had put forward there notions toward the film. The Deputy Chief Minister Sukhbir Badal ref the film as being one of the numberless films that are produced in the country for commercial reasons. He also states that the politicians are unsure of what kind of impact the movie will leave on the state as they haven’t watched the movie. Sukhbir also affirmed that “it is illogical” to suggest government’s intervention to make cuts in the movie in this stage. The release of the movie whether to be permitted or restricted is the issue between producers and CBFC. The government has no stand to be involved in the release issues. Sukhbir added such movies are welcomed and supported that are aiming towards image correction of the citizens of Punjab, who are in high position and are prejudice.

Udta Punjab is an Indian Crime thriller film picturing the current struggle of Punjab with drugs. Reportedly, the movie had issues with the censor board over profanities and use of drug in the movie. Formerly the Censor Board demanded 94 cuts in the movie and 13 pointer prior changes. The Censor Board also asked to change the name of the cities in Punjab. The film awaited its verdict by the Mumbai High Court and the results were out yesterday “One Cut.” HURRAY! It was a celebration time for the entire film associates. The High Court Orders were to release the movie with just one cut. On Monday morning the Mumbai High Court struck down all the criticisms. The High Court demanded the makers to eliminate Shahid Kapoor’s urinating scene in the movie. 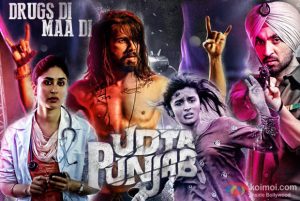 “No one can dictate to a movie creator about the content of his film,” commented High Court. Being under the shelter of Balaji Motion Picture and directed by Abhishek Chaubey, the movie Udta Punjab is scheduled to be released on 17 June, starring Kareena Kapoor and Shahid Kapoor in lead roles with Alia Bhatt and Daljit Dosanjh.

The movie awaits a day more to change from a huge controversy into a huge celebration. The anticipation is that the movie indeed will be a beacon for the citizens of Punjab and will bring about a change in the society instead of ciaos