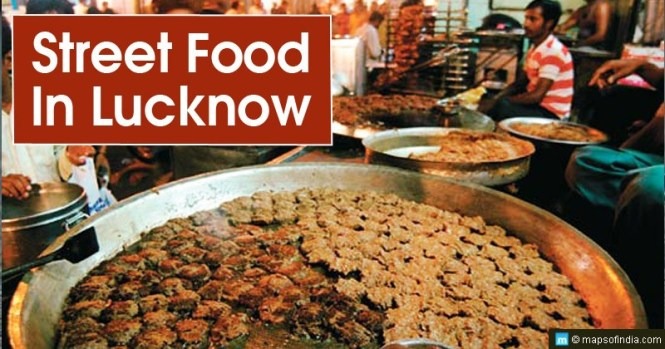 Lucknow also is known as the ‘City of Nawabs’ or the ‘Constantinople of the East’, offers some of the most luscious street food that you can consume. The assortment of street food that Lucknow offers is palpable and enticing. Lucknow may be the only city where you will not only enjoy its heavenly street food but might also get to feel like a Nawab. Lucknow is to a non-vegetarian connoisseur, what a candy store is to a sweet-tooth. Ranging from its gourmet kebabs to its distinctive mutton, you can never get enough of the street food of Lucknow. Heaven for gluttons, the street food of Lucknow offers the perfect amalgamation of Awadhi cuisine.

Here is a list of the drool-worthy street food of Lucknow which can cater to the taste buds of any connoisseur. When in Lucknow, do get a taste of this heavenly street food!

Head over to – Tunday Kababi, Chowk

This list can never be complete if Kebab is missing from it! Kebab, a savoury of Lucknow is readily available in all parts of the city and has a unique taste to it. Tunde ke kebab is also known as Buffalo meat Galouti kebab and is a speciality of Lucknow. It is a savoury made from minced meat and resembles Awadhi cuisine. The dish is prepared by mixing minced buffalo meat, garam masala, crushed ginger, yogurt, 160 different types of spices, powered cloves, cardamom, dried mint, ghee, vinegar, onions and sugar lime. Tunday Kababi, started in 1905, is best known for serving tunde ke kebab.

The Chowk market in Lucknow is one of the oldest markets in Uttar Pradesh as well as of North India. The kebabs of Lucknow are as soft as can be due to which they easily dissolve in the mouth with a unique burst of flavours. These spicy and crunchy kebabs go best accompanied with roomali rotis.

Further some other popular kebabs include Shami kebab, a vegetarian variant and Galawati kebabs.

Head over to – Gomti Nagar

Biryani is readily available all over the country due to which you may ask what is so special about the Biryani of Lucknow. Moreover, the Nawabi atmosphere distinguishes Lucknow’s Biryani thus making it the second most popular street food of Lucknow. Biryani is prepared by mixing cooked rice along with meat or vegetables, herbs an an assortment of spices.

Idris ki Biriyani- a renowned Biryani joint in Lucknow. The handpicked long and fluffy grains of rice mixed with chunky pieces of mutton or chicken along with herbs and spices is what makes its biryani stand out amongst the rest. The recipe of this distinctive Biryani is almost half a century old. Copper deghs or vessels are used to cook this biryani which are subsequnetly placed over bhattis. Pattar ka koyla is used for this bhattis. The addition of zafrani and makhani colours enhances the aroma and colour of the biryani.

The Veg Handi Dum biryani is a recommendation that you should try the next time when you are in the city.

Chole Bhature is an all-time favourite dish across North India. The taste and aroma of the dish vary from place to place. Locals love Chole Bhature most importantly due to the fact that it is readily available in every nook and corner of the city and doesn’t go heavy on the pockets either. To enjoy the best of the Nawabi atmosphere, have Chole Bhature with Lassi.

Chole Bhature has two parts to it as the name suggests.Chickpeas along with onions, herbs and spices are cooked together to prepare a curry of chole while Bhatura is prepared from a dough of all purpose flour. Coriander leaves and onions are used to garnish this Punjabi dish.

People queue up to get a taste of this delicious street food of Lucknow in the mornings and evenings. Head over to Chowk a little early so as to grab a bite of this savoury.

A chilly winter day in Lucknow is incomplete without a taste of Malai Makkhan. Malai Makkhan is similar to Daulat ki chaat of Delhi. This flavourful and creamy street food of Lucknow is widely popular amongst sweet-tooths and others all alike. Visit Lucknow in the winters if you want to grab a bite of Malai Makkhan as it is served mostly during winters.

Malai Makkhan is also known as Nimish in some parts of the city. However, there is a slight difference between the two. While Malai Makkhan which had originated in India is made using cow’s milk, Nimish is made using horse’s milk and is an Afghani dessert. It is prepared by mixing khoya, milk, sugar and nuts to give it a creamy, foamy and subsequently fluffy texture. This mixture is kept in a clay pot and hung overnight under the beautiful winter sky. The freshness of this dessert is due to blobs of dew. The pale yellow colour is due to the addition of saffron and is garnished with almonds. After that a silver leaf or Chandi ka warq is used to adorn this dessert.

This flavourful dish is a seasonal savoury of Lucknow which you must try the next time you visit the ‘City of the Nawabs’.

Head over to – Gomti Nagar

Chaat is a very archetypal dish in India and can be found in every nook and corner of the country. Every city has embellished it as one of its street food by adding a specific flavour to it ranging from spicy to tangy. Chaat is regarded as an easy go happy dish which brings out the perfect usage of spices and herbs in an Indian street food item.

Basket Chaat is a quintessential street food of Lucknow. The basket is made up of mashed potatoes, an assortment of chutneys, peas and vegetables, spices and even a wide range of sauces. It is not only fulfilling to consume but is also light on the pocket.

Gomti Nagar in Lucknow is a very famous hub for chaat items such as Basket chaat. This place also offers a variety of other street food items of Lucknow.

Kulcha Nihari is an all-time local favourite and has people drooling over its mouth-watering taste and an appetizing flavour. A trip to Lucknow will be incomplete if you haven’t tried Kulcha Nihari.

It is prepared by marinating meat with exotic herbs and spices and cooking it overnight. This is then eventually stuffed into baked Kulche. This unique street food of Lucknow is definitely worth every penny you spend and will leave you completely satisfied. The burst of flavours and the tenderness of the meat will leave you with a heavenly feeling altogether.

It is a must try street food of Lucknow. You shouldn’t miss it when you visit the city next.

Kulfi is a pleasant delight, especially during the hot summer days. This yellow and sweet dessert is readily available in every nook and corner of the city. Kulfi never disappoints a sweet tooth and can leave you amazed with its mouth-watering taste. The speciality of Lucknow’s kulfi is its flavoursome taste and its softness with which it melts in the mouth.

Kulfi Faluda comes in a great many flavours and is thus for every mood. Prakash ki Kulfi in Lucknow is definitely a one-stop destination for sweet tooths and people who are insanely in love with this tender and sweet dessert.  This shop was started in 1965 by Late Shree Prakash Chandara Arora and has been serving Kulfi Falooda since over the past 50 years. The great assortment of flavours, its vivid and unique tastes, the mark of an establishment and the friendly behaviour of the staff at Prakash ki Kulfi is what makes most people resort back to the shop.

When in Lucknow, do head over to Aminabad or Chowk to savour the best of Kulfi Falooda.

Sheermal or also known as Shirmal is a profound street food delicacy of Lucknow. This saffron-coloured flatbread is not your regular naan. What differentiates it from a normal naan is its sweet taste. Yes, you have read it right! Sheermal is nothing but a sweet naan and hence is the talk of the town.

Sheermal is clemently sweet and is prepared by mixing milk with yeast & maida. Saffron, nuts and sweeter are added to give it a distinct flavour. These ingredients are mixed together and are allowed to sit for a few minutes. The dish is made fluffy due to yeast and is then baked in tandoor.

Sheermal is either served with spicy curry to balance out the taste or can be enjoyed alone as well. Don’t forget to try this dish when you are in Lucknow next. It not only has a unique taste to it but also allows you to experience a burst of flavours.

Head over to – Aminabad

Shahi Tukda roughly translates to Royal Morsel. This royal dish belongs to the Mughals where it had originated some 150 years ago and since then has been pleasing the taste buds of connoisseurs and sweet tooths all alike. The current form of the Shahi Tukda originated somewhere in the 1930s when slices of bread came into existence.

A speciality of the ‘City of Nawabs’, this street food of Lucknow is made by frying bread slices till they are golden brown. They are then further dipped into a syrup and are eventually coated with sweetened condensed milk or rabdi. The aroma and the taste are enhanced by adding saffron to it.

It is readily available in every nook and corner of the city and thus does not burn a hole in your pocket.

Head over to – Aminabad

Zarda, a sweet savoury of Lucknow is prepared by boiling long grain rice with milk, food colours and sugar. This traditional dessert of Lucknow gets its flavours due to the addition of khoya, nuts, raisins, almonds, cardamoms and pistachios. The word Zarda is of Urdu and Persian origin and is taken from the word zard which means yellow.

Due to the addition of an assortment of food colours, the dessert is quite tempting to look at. This Awadhi dish can be traced back to the Mughals and is said to be a favourite of the Mughal Emperor Shan Jahan.

Zarda is used during the festivity season greatly due to its colour and its tempting looks. It is a favourite during Eid and Weddings.

The above list comprises of an exquisite range of street food of Lucknow. Even though there is more to Lucknow than meets the eye, this list comprises a few of the street food items which are considered to be the best. The nawaabi atmosphere and the burst of flavours is what makes the street food of Lucknow so delectable and appetizing. The heavenly taste leaves behind a delight and provides a connoisseur with an unrivalled satisfaction and contentment.

Do share your experiences with us in the comments section below and let us know which street food of Lucknow you found to be the one that tops your list.

Stay tuned for more gastronomic articles! Also, drop down your comments and let us know which city’s street food would you like to read about next.