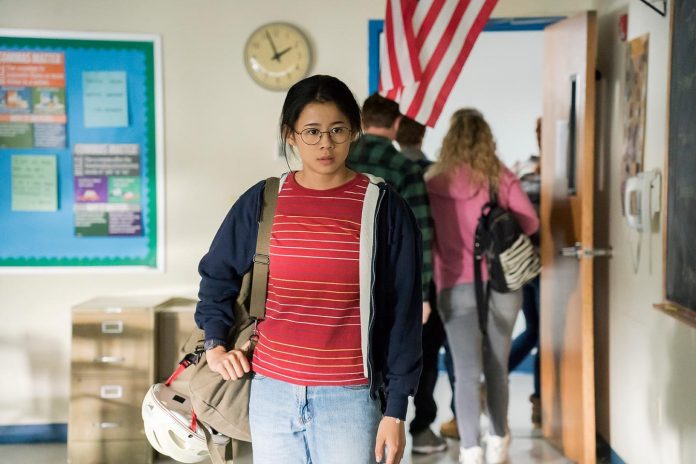 Another day of the lockdown, another roster of TV shows to choose from. Netflix has a bunch of originals and some from the world of Bollywood and Hollywood up its sleeve, and this lockdown seems to be the perfect time to unleash it. While it has had some failures, like Hasmukh and Chris Hemsworth’s Extraction, there have been some who have gone under the radar but shouldn’t have. Half of It is one such movie. A movie revolving around teenagers coming of age, discovering sexualities, discovering their passions and ambitions, Half of It is understated and therein finds its beauty.

When looked up on Netflix, Half of It comes under LGBTQ Movies, US Teen Comedies and is heartfelt and quirky. Which it is. Other than being just that, Half of it is an underrated masterpiece. The actors are silently marvellous. The movie doesn’t overdo the point and doesn’t deviate from its central premise. After a lot of cringy and frankly overdone teen romedies, it was a welcome departure to watch Half of It.

What Is The Movie About?

Before I begin, a huge spoiler alert. The movie is full of twists and turns and is ultimately a complete joyride. So if you want to enjoy the film of your own volition, without any reveals on my part, you should stop reading now.

Set in the fictional town of Squahamish, Half of It is a story of three people, and then the town itself. Our protagonist, Ellie Chu, is a Chinese American, who was born and brought up in the town on Squahamish. She doesn’t have a great many friends and is a straight-A student. She also writes essays for most of the students in her grade, getting paid for the work. Ellie also has been crushing on famous but sweet Aster Flores, who is probably everyone’s first love in the town.

Aster is currently dating one of the wealthiest kids in the town, Trig. But as you would have it, she is only doing it on the orders of her father. Enter Paul Munsky. Adorable, goofy and a bit dumb, Paul Munsky believes himself to be in love with Aster Flores, and finally sets out to woo her. He decides that the best way to catch her attention would be to write a sweet love letter. But since he is not that good with words, who else to ask but the resident literature queen herself?

At first, Ellie refuses to write the letter for him, not wanting to sabotage her feelings for Aster, but eventually agrees as she needs the money for her electricity to keep running. And then begins a series of unfortunate events, written in a very minimalistic style.

What Is So Special About Half Of It?

Well, the premise in itself is not unique. It’s a typical boy likes girl scenario, boy recruits nerd to write love letters for him and the girl ends up falling for the subject of the love letters. What is unique about the movie is the sheer simplicity it has been crafted in. The film aims to capture the essence of minimalism in the millennial mind and portray it. It has, of course, its fair share of twists and turns, but they don’t seem to come to you right away. They are all gradual developments, and the watcher’s mind often goes, “Huh. I felt like I knew that…” when confronted with the plot twist.

The Half of It goes to prove an age old statement about Hollywood – sex sells. The movie borders on the PG side of PG-13, and hence still remains relatively underrated in the Netflix community. It being an LGBTQ movie on top of that just adds to its nicheness.

Despite carving itself up a specific audience, Half of It is a movie that should honestly be watched by everyone. We are in a generation where most of the cinematography aims at being loud and jarring. Capturing an audience is not as easy as wearing hot pink clothes and acting typical anymore. Movies demand to have meaning and an absolute reality to them, which Half of It quite wonderfully captures.

While I could go on waxing poetic about how wonderfully simplistic Half of It, I won’t. That is because while there was a lot about the movie that had the ability to simply enthrall, there was also a lot that just didn’t feel realistic. Yes, there are teen coming of age shows that portray 29 something year olds as 18 years olds, and it’s far from as realistic Half of It is. However, I’d just like to say that even Half of It went wrong with how they portrayed a Gen-Z teenager.

These days, you won’t see our teenagers discussing Proust and brush strokes. They would rather be discussing the latest Netflix show that’s streaming or about the most recent Tiktok challenge that has gone viral. In this case, The Half of It fails to make that connection and you really don’t find yourself identifying with that aspect of the movie. But what broke the film for me is the same thing that made it for me.

In this scene, Ellie challenges Aster, through the letters, to draw graffiti on the wall, countering a stroke that she had made already. It turns into a game of theirs – trying to convey their thoughts and ideas, their strengths and insecurities in graffiti.

There is something serene, beautiful about the love they share. A standard, a very misconstrued stigma exists around homosexual, lesbian relationships –  that they are promiscuous, wanton, moralless. But the truth is, they aren’t. They are just the same as a heterosexual relationship. I would even go so far as to exclaim that they are purer. These relationships are a meeting of the minds and then a meeting of souls.

Stream Half Of It Now!

Half of It shows all of this to you. You don’t see the indecision, the quarrel of not knowing your identity. You see a simple love story, just somebody else’s. This simple breakdown, normalization of lesbian relationships is exactly what makes Half of It the masterpiece that it is.

And last, and not the least, is the star of the show. The friendship that Paul and Ellie share. They are both from opposite sides of the spectrum. They have ideologies and passions that are as dissimilar as water and stone. And regardless of what brought them together, their friendship is probably the most authentic and most accurate teenage friendships I have seen. They are both morons, yes, but they are each other’s morons, and no matter what happens, the movie assures you that they’ll always have each other’s back.

Half of It will not have a sequel. We will not know if Ellie got back to Aster after two years. But what we’ll always know is that love will always find a way to thrive and that maybe it’s okay to take a chance on that jock who’s asking you for his help. He might make for a good friend.