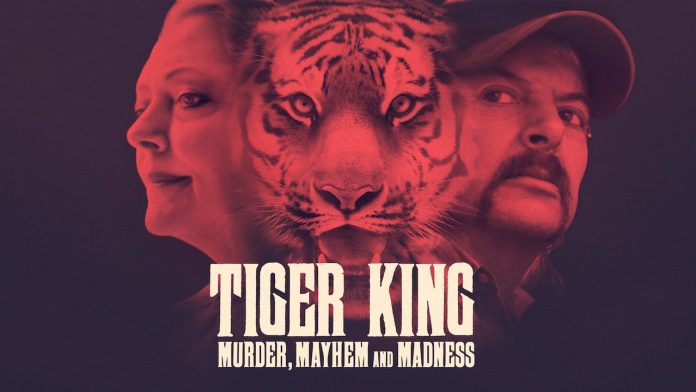 Bizarre. We decided to find out which adjective had occurred most to describe Tiger King. Bizarre was the world. Mind-boggling, startling and a documentary unlike any other, Tiger King manages to create an enigma of a show that once picked up, cannot be put down. For those of you who have never even heard of the series, we’d like to clear up the air. Tiger King is not a weird Indian spin-off to the Disney blockbuster Lion King.

Tiger King is a true-crime docu-series airing on Netflix right now that covers the big cat situation in North America right now. What is the case, you ask? Well, various countries have different laws on the possession of pet animals, and the kinds of pets citizens can keep in their land. In India, you will see that other than pet dogs, cats, birds and fish, no other animals can be kept. In America, however, people keep great big wild cats as their pets. The documentary explores three people who do this; Joe Exotic, owner of the G.W zoo in Wynnewood, Oklahoma, Bhagawan Antle, another animal breeder and Carol Baskin, PETA advocate and CEO of Big Cat Rescue in Tampa, Florida. The show also mainly revolves around the animosity between Joe and Carol.

The Players Set the Stage.

Tiger King mainly is the story of three people and their lives. The first is Carol Baskin, a lady who is allergic to cats and has made it her life’s mission to rescue big cats. She has had two husbands, the second of which went missing in 1997, as focused on in the show. And don’t let me start on Joe Exotic.

A private big cat keeper, with an unofficial three-way marriage to two men Travis Maldanado and John Finlay, Joe Exotic is as weird as they come. He has an extreme proclivity to pyrotechnics and makes most of his income from zoo visits by tourists and his channel Joe Exotic TV. It is soon evident in the show that he harbours an intense hatred for Carol Baskin, which is not a secret amongst the keepers.

The final, is Bhagawan ‘Doc’ Antle, another piece in this chessboard. He is similar to Joe Exotic, with a huge zoo/park for all the big cats he owns. Not as eccentric as Joe, Doc is no innocent either. He seems to be leading a personality cult. If we are to go by the documentary’s word that is.

There are of course, other subsidiary characters, and they are just as eccentric as these three though not as significant. They included Mario Tabraue, who was a drug lord who then was revealed to be an animal trafficker; Jeff Lowe a Las Vegas playboy turned owner of G.W zoo and then James Garretson, FBI’s CI who was the key figure in making the case against Joe Exotic.

Why is Tiger King different from other True Crime documentaries?

If you have gone searching in the true crime genre in Netflix, you will have noticed a huge collection of some of the most well written documentaries in television. A recent addition, if you remember was Don’t F*** with Cats. And yet, despite how good these shows were, none of them captured audience’s attention the way Tiger King has. And why has that happened? Well, mostly because of how out there it is. The lives these people have lived, are living, the kind of people they are, is very unique, for the lack of a better word.

Tiger King is also fixated on the kind of people they are more than the state of the animals themselves. The first episode focuses on the premise of the entire show, with small cutscenes from each character, talking about their life, their work so on and so forth. It soon descends to the crux of the show, the true purpose of the show. The show’s core is to investigate the conviction of Joe Exotic for attempting to kill Carol Baskin in a murder for hire plot.

The specialty of this show lies in the way it is shot. There is no real tangible connection to each episode. I mean, there is the core story and the characters, but there are so many side plots and factors to twist and mold your perspective, that each episode feels like the start of the series. The ending of the show leaves you with more questions than it does answers, and a deep-rooted confusion for whom to like and whom not to like.

Whose Side Do We Take?

A common motif running through Tiger King was the antagonism between the show’s main protagonists, Joe Exotic and Carol Baskin. And Doc Antle and Carol Baskin, and, you get the point. The show talks about how messed up each of their personal lives are. Joe Exotic has had five husbands, three of which are in the show. Joe is also reportedly cruel and sick. He would be horrible to his animals, killing the tigers or other animals for reasons that were completely unwarranted.

Carol Baskin is a protector of tiger’s rights, but she also performs appearances for visitors. Her enclosures aren’t as big as Joe’s or Doc’s. However, she insists on keeping animals that have nowhere else to go and not breed them. In the series, she confesses that she gets the tigers spayed when her (former) husband is away.

Regardless, she is weird too. There is also another major premise of the story, which is, did Carol Baskin kill her husband? Noone except for perhaps Carol knows the answer. Carol’s former husband, Don Lewis mysteriously disappears, and when asked to take a polygraph, she refuses. Her act creates suspicion in the mind of everyone watching and following the investigation. The case, however, goes cold, and with the arrest of Joe, it fades out. That is, until the release of Tiger King.

Call it misguided, misogynistic and twisted, Netflix manages to take hold off one of the most bizarre sects of America, the type of people you only heard in rumours when told about the west. It takes these stories and spins them up into seven episodes of pure suspense, thrill and absurdity. You can catch all the events of Tiger King right now on Netflix.

You can also watch the trailer to Tiger King below.