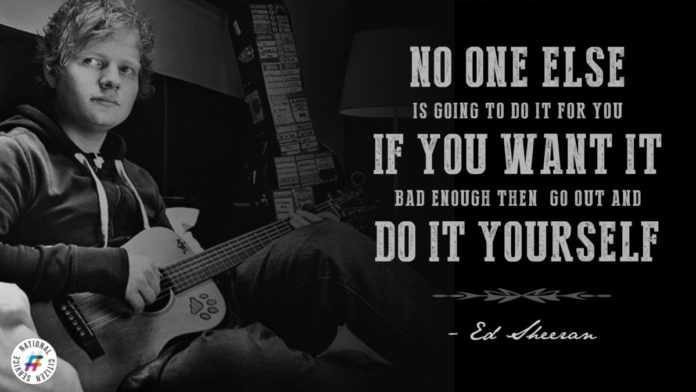 I think there are hardly any music lovers who don’t know “Ed Sheeran”. His new album “Divide” has already conquered the music world within a few days and four of his songs are on the Top Ten of Music charts continuously for past three weeks. Beyond all his achievements, Sheeran is a superb storyteller and his songs offer emotional, contemplative portrayal of relationships that will often make you go spellbound.

Since its release in January 2017, Shape of You has been downloaded over 488.500 times and has notched up 77.43 million streams. This is one of the first two singles released before the official release of his album Divide. This is one of his catchiest songs ever. This song stands out from his usual ones due to its super addictive catchy beats. However, I think the lyrical video is much more thrilling than the official one.

Thinking Out Loud was also the first ever single to spend an entire year within the Top 40 without leaving it. It’s Ed’s top seller and his most streamed, notching up 113 million streams. The passionate slow dance goes so well with the romantic song and magnificently portrays his amazing talent. However this song was a slow burner, it claims the longest climb to number one position ever. It hits the number one position after 19 weeks in Top 40.

This is the final single from Ed’s second album x that peaked at Number 15 upon full release in summer 2015. This song is so touching, passionate and heartfelt and is bound to bring out the emotional version inside you. This song explains how love, memories and relationships are braided in such a wonderful way.

This song once again proved that Sheeran is the King of sentimental love songs. This touchy romantic song expresses earnest sentiment in straightforward way just like Thinking out Loud. This one is sweet, slow and utterly wistful and is a perfect showcase of a romantic lyrical nature. This is one among the Top ten songs in UK Singles chart.

‘Dive” begins soulfully and as we move forward Ed’s mesmerizing voice starts to set the mood. This song is very catchy, magical and you will easily fall for it. This one is so amazing and perfect that you can listen to it on repeat all day long. This song better gets a music video soon.

Ed Sheeran’s new album is pure gold. Arriving three years after his last album, “x” he does not disappointed his fans at all. His unquestionable song writing skills and his ability to pen soulful songs is the major reason behind his growing popularity day by day. Apart from the two songs of “Divide” mentioned above you could also try “Supermarket Flowers”, “Perfect”, “Galway Girl”, and “Nancy Mulligan”. All the songs are marvelous, mesmerizing and astounding. Go for it!