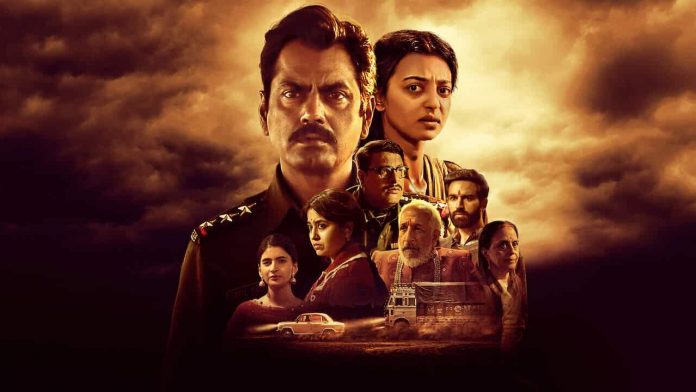 Starring the exceptionally talented Nawazuddin Siddiqui and the scintillating Radhika Apte, Raat Akeli Hai was a movie I was very excited for. Ever since Netflix announced it’s seventeen movie set coming during the quarantine season, Raat Akeli Hai was one movie I couldn’t wait for. However, I wouldn’t be loathe to confess that I was equal parts excited and skeptical. While Netflix India had a good track record for movies worth watching, after Sacred Games Season 2, I didn’t want to be disappointed. And I am happy to say that I wasn’t. Raat Akeli Hai, is, in a sentence, equal parts Bollywood and equal parts film-noir thriller. Spoiler Warnings below. If you haven’t watched the movie yet, I highly suggest you watch it and then come back to debate theories with me.

Nawazuddin Siddiqui Is The Dashing Hero, But Not Quite.

The movie begins at a wedding. No scratch that. The movie actually begins with a death. The death of a lady and a man returning from somewhere. Murdered by a hit man, doused by acid and buried, remember this, the details will be important later. Cut to the wedding. Sub-Inspector Jatil Yadav is at the wedding of his colleague, and his mother is out scouting for a suitable bride for her son. Small commentaries of Jatil’s complexion being too dark are passed around and they soon leave the wedding. Jatil later comments on the lady and her character, judging her for what she wore and makes it clear that he shall only marry a civilized woman, who knows her place. Not a good look, Jatil. We were rooting for you.

This is where the story starts to meander. You see, when I first decided to write this review, instead of simply penning down my unbiased thoughts, I went through a lot of other movie reviews on the same. A very common critique was of how long the story seemed to be. And yes, in the beginning it does feel a little stretched out. Some of the scenes feel unnecessary, and Jatil actually manages to infuriate you. The movie gives you a whole, Paatal Lok, but make it more bollywood-esque experience. But as the story progresses, things kind of start to make sense.

You Become A Detective Too.

Raat Akeli Hai isn’t really like all those detective movies you have been seeing. It demands you to put on your sleuthing hat and get hands on with the mystery. There has been a murder in the wedding house. The head of the house has been killed and the killer is on the loose. Time is of the essence, and every minute of the film is peppered with clues. One positive aspect of Raat Akeli Hai was that no clue was too difficult to decipher. You weren’t left confused about what happened to who and what the story was. All you have to do is look. You don’t really like the man who has been murdered.

A characterless, disgusting human being, everyone knew that Raghubeer Singh had it coming to him. The movie invalidates the fact that a person deserves justice. It is never about recovering justice for someone who isn’t worth it. The story is more about uncovering the truth. And while from a real-life standpoint, that’s not much of a motivator, a film-noir movie pushing you a few inches more into a deeper mystery is incentive enough.

Also Read: Paatal Lok – The Answers Are Not What You Think They Are.

You can only proceed further if you have watched Raat Akeli Hai, because I am going to break down the entire story, and then the entire plot for you. For now, you shall know the family tree. The family begins with Raghubeer Singh. An old landowner, Raghubeer Singh is horrible and disgusting in every way you think he is. He has a wife, whose name we do not really know. She is killed in the starting of the movie alongside her driver as they drive back home. Their killer douses their bodies in acid and buries them in a tannery, unfortunately getting some acid on his hands in the process. He now has a permanent scar. These details will be important later on.

Also Read: Never Have I Ever: Hard Pass On Teen Comedy Or Is It Worth Watching?

While this is the tree of only the people related to each other, there are of course some more characters that are not. We have our resident Netflix queen, Radhika Apte, who is also Raghubeer’s newly wedded second wife. Then there is Munna Raja, a politician in cahoots with Raghubeer, whose daughter is engaged to be married to Vikram. You also have Chunni, the servant maid working in the house. Her father had been murdered, or rather, ‘accidentally killed’, along with Raghubeer’s first wife. And then we have our favourite actor of all time, Nawazuddin Siddiqui, the sub-inspector in charge. Raat Akeli Hai may have you laughing at the start, but that dissolves soon.

The story delves into issues that are actually real in parts of the country. Child trafficking, pedophilia, prostitution, an illegal policing system and corrupt politicians. Raat Akeli Hai does it in a way that doesn’t offend anyone, lending a certain Bollywood touch to it. You are quite aware that the movie is most definitely a fiction but there are some scenes in the movie which have you just a little on edge, questioning, “What if?”

Should I Give It A Watch Again?

Well, most definitely. Raat Akeli Hai, despite being the kind of movie that loses its suspense after the first watch, has you coming back to it. My favorite scenes are the ones where Nandu, Jatil’s second in command, figures it all out and the one where the entire plot is broken down in an epic reveal. It is unrealistic to have a mother as cool as Jatil’s but I guess Radhika Apte as a daughter in law is a boon. The story ends the way any good bollywood movie would end, with the hero and heroine reconciling. And while we would like to have that rough finish that most web streamed movies have, this is good too. On the whole, a two time watch, if not a little stretched, Raat Akeli Hai is a movie you should check out.

4 Types of Game Room Ideas for the Home