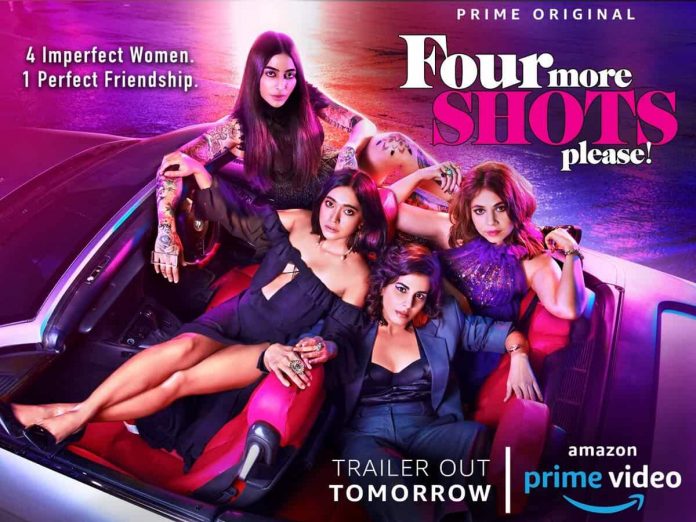 To answer the question, I posed to myself in the title, depress. The second season of Four More Shots Please depresses you. Before I go into the details I would like to warn all my readers, the rest of my article will have spoilers. From both season one to season two, I shall be breaking down what was different, what was not, and what could have been. Before the spoilers, here’s a brief introduction into the show, to the ones who want a feel of the waters first.

Umang, Siddhi, Anjana and Damini are four friends. Having met each other at the Truck bar, a pub they frequent, the four women take a liking to each other and become the best of friends. What follows is an entire show tackling misogyny, misandry and misunderstanding.

Damini is the head of a web magazine that runs exposes on influential people of the times. Anjana is an insanely successful lawyer and a divorcee, and mom to adorable four-year-old Arya. Umang is a bisexual fitness trainer from Punjab with a proclivity for colourful language. Siddhi is tired and sick of her mother badgering on and grooming her to find a husband in her influential clique of society wives.

Before I begin, I’d like to warn you, spoilers ahead!

Season One ends with a big fight and all the four girls heading off in different directions in their life. All of them going through some form of heartbreak alone, without the support of each other. The next season picks up a few months from there. The premise starts with them getting back together, back to being the best of friends.

What you would think would drag on for a long time takes quite a refreshing turn; The reunion isn’t as slow to come as you would think it is. You love the camaraderie, the jokes, the fun, all of it. The show has this way of making you feel what the girls think, based on which one you identify with the most. The episodes then follow kind of the same tune, just with added baggage this time.

Also read 10 Facts you need to know about RIVERDALE

A huge disappointing factor that came with Season Two was that while it does get on to fixing the catastrophes the first season had created, it doesn’t take too long to create its own. The same heartbreaks are back, just with different masks this time. Yes, a lot of the problems the girls face feel real, from Damini’s book not getting published, to Siddhi feeling like she hasn’t done anything with her life.

The show lingers on the same problems repeating in different ways instead of moving on and giving them some dimension. Men, all of them, even the best ones the show offered, were flawed. Badly. They have flaws to the point where it almost felt that the disappointment in not having the perfect guy was the glue pushing the four together.

One thing I loathe to admit is the show fixating on the promiscuity of the women. We loved to see the women take control of their narrative, to feel what they feel, and choosing what to do with it. But soon, after maybe two or three episodes, the whole concept feels forced upon you, even as a woman.

Four More Shots has side stories from each of the women which tackle something non-romantic, and that is like a breath of fresh air at this point. The whole narrative of the women’ doing what they want regardless of what society expects’ reaches this line where it’s no longer salient. It becomes rhetoric. A woman is strong and brave and confident. And it has nothing to do with the romantic life she has, and Four more shots don’t do a good job separating these two sides.

While the show is a delight to watch, the truth is, there’s nothing different. The women are the same, albeit more confident in their shoes. They are the same, and the mistakes they make are the same, even if they are in different settings.

One last thing about the show that leaves much to be desired is how depressing it gets. We get it. Life is not always happy. Things don’t go your way all the time, and you sometimes need to roll with the punches. But at this point, the show seems to have had so many depressing moments that the next heartbreak is no longer a plot twist. Instead, a happy ending would feel like one, which doesn’t happen, if you were wondering.

Four More Shots Please gets so repetitive by its half-way mark that we had to fast forward through the penultimate and ultimate episodes. I didn’t even stop for the moments that signified the making or breaking of individual storylines because everything turned out to be too predictable by then.

For the same reasons that Four more shots displeases us, it impresses us too. The second season doesn’t focus on the girl’s bond anymore. The conflict and the reunion address it and that’s it. The women are a team now. And it’s nice to see that they don’t break at the drop of a hat.

Homosexuality. A subject that everyone hesitates to discuss but one that the show doesn’t shy away from. It is nice to see a lesbian couple working out or not working out and functioning the same way heterosexual ones do.

She is taking back control of her trauma. What Siddhi experiences in the first season, with her beau’s father blackmailing and sleazing on her, is nothing short of trauma and harassment. Her taking back control over this experience she has gone through, making it into a weapon she can use for her talents, is very interesting to watch. From the entire season, we deduce that she has had the best character development.

The story of the giver and the receiver. It is about when a receiver has completely broken down, but there’s someone there for them. This someone is the giver. They are there, taking care of them at every step, every turn. However, it sometimes reaches a point where the giver gives so much that they have nothing left. To heal the receiver, they destroy themselves. The show does a beautiful job showing you this, throughout the ten episodes. They do show you that no matter how difficult decision is, you are not wrong for wanting the best for yourself. To want to break out of that cycle.

Final Judgement? Give It A Go!

The second season of Four more shots please wasn’t exactly bad, but it wasn’t better than it’s predecessor. With the way things have ended, we are sure there are going to be more trials and tribulations next season. Oh, yes, there definitely will be a next season. And we can’t wait to see them again, hopefully, with a different set of problems this time.