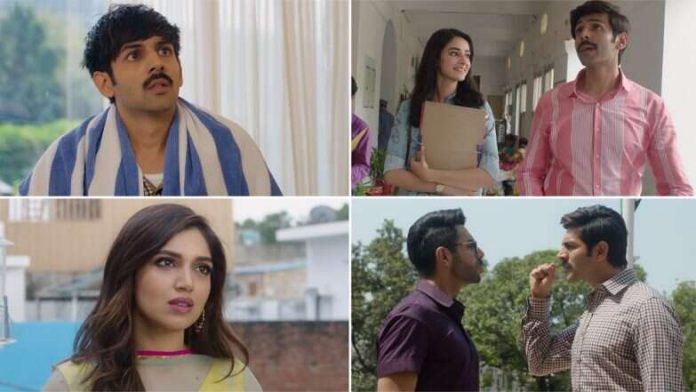 There are some things that are not to be joked about. However, we often normalize many such issues and overlook these jokes as merely “for fun”. One such issue is rape, be it outside a marriage or inside. Our country has seen many activists fight for victims and give them justice. They try to spread awareness against misogyny and misandry, toxic masculinity and toxic feminism, and against the patriarchy that has victimized all of us. They use whatever means available to them.

Then comes Bollywood with its normalization of toxic sexist ideas. The trailer of Pati Patni aur Woh launched on November 4, instantly coming under widespread criticism. First of all, people were having none of the toxic habit of having a woman addressed as “Woh”. But what caused more of the row was Kartik Aaryan’s dialogue, which was not only said jokingly, but also passed off as harmless humour.

What happened with the trailer of Pati Patni aur Woh?

Before the trailer released, Bhumi Pednekar had said, “it is not a sexist film”. The trailer proved it was exactly that.

Apparently, people were amused by this dialogue, and started lashing out at women criticizing it, calling them stuff that ranged from “toxic feminists” to other derogatory words. But this time, a majority of people were not going to take this casual behaviour lightly. Moreover, Bhumi Pednekar saying that the movie is about “gender empowerment” has garnered more fiery comments. The fact that the two female co-stars are actually supporting this has outrages netizens.

The film, starring Kartik Aaryan as Pati, Bhumi Pednekar as Patni, and Ananya Pandey as Woh, is set to hit theatres on December 6th.

People soon came out with their remarks on Twitter

Oh! So much for pleasing the patriarchy.

Soon enough, the stars had to make sure the matter is handles as well as possible. And Bhumi Pednekar was back.

However, it seems like there were indeed people who loved the so called “humour” in the trailer.

Also read Meet Ranu Mondal: The Celebrity Who Went From “Wow” to “Haha”

What’s better than absolutely normalizing a trailer full of sexist exchange of dialogues? Calling it a ‘blockbuster’ because it feeds the patriarchal toxicity.

A satire! Are you for real even?

People have criticized Kartik Aaryan for repeatedly choosing such toxic characters to play on screen.

People have already drawn comparison with the popular TV show Tarak Mehta ka Ulta Chashma, because adultury has been a fun issue to deal with in humour on the screen.

This isn’t the first time Bollywood has made such insensitive sexist jokes; the industry is replete with instances of portrayal of misogyny and misandry. And like always, there are sympathizers of these “jokes”. But the good thing is, more and more people are calling out on these traits. Hopefully, one day Bollywood grows up too. Because it influences a bulk of the people’s mindset, and given the hopeless condition we see, a strong medium of change is indeed needed, one that Bollywood can play the role of.