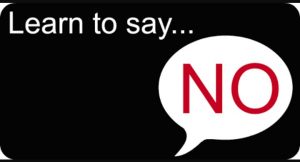 Do you have a difficulty of saying not to others? Do you know how to say no?
I know. Sometimes, even I don’t like to say no. But it’s very important that we should learn saying no to people when we actually don’t like anything. Saying yes seems easy but not the necessary answer all the time.
Say yes to the things you actually like. Don’t say yes in order to please someone.
Say yes when you actually want to do something.
Say no when you really don’t want to pursue or continue something.

Sometimes for the sake of friendship and relations, we avoid saying no. We say yes and try doing something which we can’t do or for which we don’t have time.
It’s important that we should help our friends. It’s a very good habit. But remember saying no will not disappoint people. If they are true and loyal to you, they would stay and accept your decision of saying no.

I would say that before saying yes, you should understand the implications of saying yes.
We usually say yes to little requests. But keep in mind that these small requests can pile up together and lead to a much bigger problem. Responding to some requests is required but not necessary all the time.

Realize that saying NO is OK. It’s not a big issue if you’re saying no to anyone.
And most important you should say yes when it’s actually possible for you doing things for that person for the rest of your life. Don’t be afraid of anything. Everyday people say yes or no and it’s completely fine saying no. You just need to understand that you’re not the only one saying no.

Keep it simple. Let the person that you can’t do it. You should prioritize your things.

It’s better to reply with a NO than saying nothing.

Yes, Sometimes it actually makes a person feel better because you chose to give your point of view and are being respectful. But then what matters is the way you chose to say no.

Remember saying no is important and it’s completely fine. Rather than shying away and cutting off with people, you should actually learn how to say no.