“SLEEPING BEAUTY” and it’s not a folk-lore 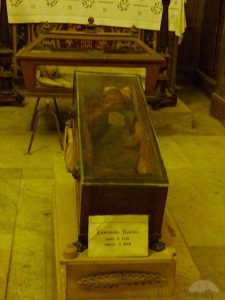 I mean starting from the revolution of pyramids, the mysterious Gods of Egypt, passing through the Pharaohs with the Great Nile and the mystifying and the enigmatic ways of preservation of the dead ones i.e., the mummies, awestruck everyone whose ear stand a witness to it.

And among all those the discovery of the “Sleeping Beauty” stands out of all. The near-perfect preserved mummy of this two year old girl is the best of all there attempts in the science of preservation.

Ninety years ago on December 6, 1920, Rosalia, daughter old Sicilian Official Mario Lombardo, died of pneumonia at the age of two. The father grieved but wouldn’t settle and hunted for Alfredo Salafia, a Sicilian professor of Chemistry to preserve her. After his days of research for a magical outcome, she was rested in the Capuchi Catacombs of Palemo in Sicily.

“Sleeping Beauty”, the title she earned was because of her near-perfect preservation in which she just looks like a living baby taking sweet nap. This enigmatic science behind this stayed under rocks until Salafia’s handwritten memoir was uncovered by anthropologists . It revealed that her blood was replaced with a formula that prevented the body from drying out killing bacteria. The chemistry translated to-“one part of glycerine, one part of formalin saturated with both zinc sulphate and chloride and one part of an alcohol solution saturated with salicylic acid.” 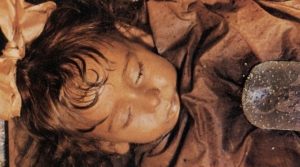 To add to this there have been many facts or folklores coming up regarding this mystic mummy. Being a famous mummy it is visited often and researched upon and it was discovered how her eyes appeared to be opening. While some of them believe that this was related to child’s soul anomaly, many of them also gave practical explanations that-“It’s an optical illusion produced by the light that filters through the side windows, which during the day is subject to change.”

Even after such explanations, Rosalia will still remain one the most bewitching mummy out there.