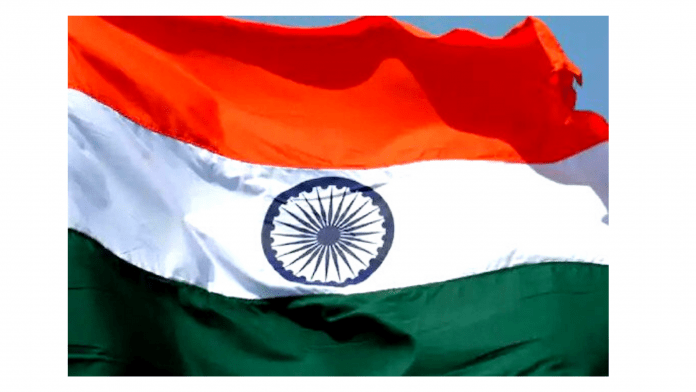 “Our flag does not fly because the wind moves it; it flies with the last breath of each soldier who dies protecting it”.

The Indian flag is just not a piece of cloth, it is an emotion for all 1.3 billion people.

Not every one of us knows that our flag got modified for six times. It has evolved so much in comparison to the present form.

It was Pingali Venakayya, who designed our present form of the national flag.

On 2nd October, remembering Gandhiji for his strive to pull his country from the clutches of British cruelty. His contribution to evolving the present ‘Tricolor Tiranga’ is one of his remarkable work. Let’s know the history of our national flag before it got modified into its present form.

The first national flag of India was brought out in the year 1906 and was also hoisted the same year.

The hoisting of our national flag took place in the Parsee Bagan Square (Green Park) in Calcutta (Kolkata).

It has been reportedly contrived by sister Nivedita who was an Irish disciple of Swami Vivekananda.

The flag was fabricated with green, yellow, and red-colored stripes with Vande Matram written in the middle with Devnagri.

The topmost stripe was green with eight unfurled lotuses, and the bottom red stripe had a shining sun and a crescent moon.

With a period of just one year, our national flag got transformed again.

The very next year in 1907, again a new design was turned up.

The colors got inverted from its position and the red color was replaced with saffron color.

This time the top stripe comprehend eight simple flowers and the bottom green stripe had the shining sun on the left while a crescent moon and a star on the right side of the flag.

The special thing to note about this flag is that it became the first flag to get hoisted in a foreign land.

Madame Kama and her exiled revolutionary group hoisted the national flag in Germany in 1907.

The third transformation of the flag took place in the year 1917 and had a very unique approach for the design.

It is comprised of five red and four green alternate horizontal stripes.

Also, seven stars in the saptrishi configuration were superimposed over the stripes.

There was a union jack placed over the left upper corner of the flag with a crescent moon and star on the upper right corner.

The hoisting of the flag was done by Annie Besant and Lokmanya Tilak and took place during the home rule movement.

This was a phase in India when political struggle took a turn.

Again India saw a delineation of their national flag.

During the All India National Congress Committee, at Bezwada(now Vijaywada), an Andhra Youth came along with their own design. The flag was designed as red and green stripes representing the Hindu and Muslim communities in the flag respectively.

They went up to Gandhiji with their idea. Gandhiji suggested adding a white stripe to the flag depicting other communities and a spinning wheel symbolizing the progress of the nation.

This flag was unofficially adopted in the year 1921.

The 1921 flag provoked various communal interpretations and every community started seeking their representation on the flag.

The Sikh community later came up with demanding the inclusion of yellow color to the flag or simply removing the concept of religious symbolism.

So, it had to be brought down and a new flag was planned out.

Ten years following, a commitment was passed stating the adoption of a tricolor Indian national flag, which is similar to our present flag approach.

So, the new national flag prepared had three stripes of saffron, white and green colors arranged from top to bottom, with a spinning wheel placed centrally.

The flag committee was organized on 23rd June 1947.

Three weeks following this date, they reached a decision of excluding all the communal implications. Thus settled with suitable modification of the national flag, acceptable by all the parties and communities.

The “charkha” was replaced with “Dharma chakra”, with 24 spokes in it depicting Dharma and integrity.

The unfurling of our national flag thus took place on 15th August 1947 at the council house. It was for the first time as an independent country, unshackled from the clutches of the British rule.

Summing the things up…

Tiranga or tricolor comprising of horizontal triband of saffron, white and green colors, with Dharmachakra in blue placed at the center, was designed by Pingali Venakayya. It was based on the Swaraj flag, a flag of the Indian National Congress (INC).

The flag is always to be made of Khadi which is handspun silk or cotton. The raw materials that could be used for the manufacture of Khadi were confined to silk, wool, and cotton.

The setting up of units for flag manufacture in India is under the control of the Khadi Development and Village Industries Commission (KVIC). There is only one licensed unit for manufacturing, which is based in Hubli. After manufacture, it is sent to the Bureau of Indian Standards(BIS), for stringent quality checks.

Any defect in the manufactured flag leads to serious shortcomings and can lead to jail. Our national flag is a pride for all the citizens of India and is a symbol of sovereignty, integrity, and similarity.