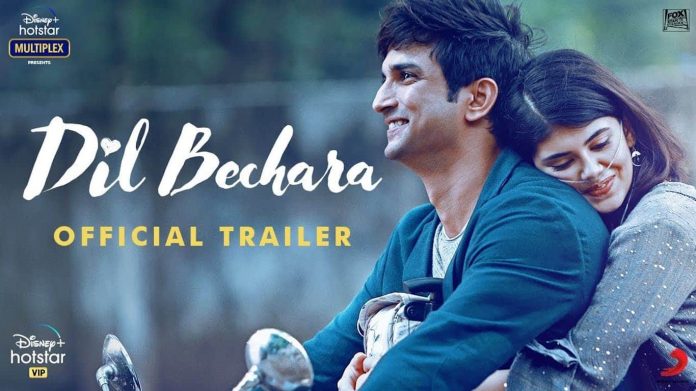 There are some movies that hit too close to home. You can feel real life mimicked in these movies, and it starts feeling surreal; both life and the movie. It has barely been a month since we lost the shining star that was Sushant Singh Rajput. And it is hard to come to grips with the facts, but Dil Bechara, his swan song, makes it a little easier. Today’s article, isn’t a criticism or a critical review of the movie. It is rather, a celebration of the life of the charming, the handsome, sweet, humble and captivating Sushant Singh Rajput.

Based on the Tom Green bestseller The Fault In Our Stars, Dil Bechara navigates the story of two cancer patients, meeting by chance, and falling in love by choice. If you haven’t watched the movies, or read the book, beware for spoilers below.

The story of Dil Bechara is in the small city-town Jamshedpur, between two characters Kizie Basu and Emmanuel Rajkumar Junior. Following the same kind of narrative as the books, the movie follows the story of Kizie and her encounters and friendship with Emmanuel. Played by the talented Sanjana Sanghi, Kizie is a thyroid cancer patient, perpetually dependent on an oxygen cylinder for her existence on earth.

The movie has a background narrative of Kizie’s journal; her day to day experiences, and how she has now reached a slump in her life where every day seems to blend into another. Basically, another boring day in the life of Kizie Basu. That is of course until Immanuel Rajkumar Junior comes barreling into her life.

Also Read: Half Of It – A Breath Of Fresh Air In A Sea Of Cringy Rom-Coms.

From the beginning of Dil Bechara, you feel as if you are in Kizie’s place. You are reliving your encounter with Sushant, the memories he has given you and the ones he is going to give you through the movie. Emmanuel meets Kizie the way Sushant meets us, a smile on his face and a lightness in his heart. It’s hard to not giggle at his antics, and his fangirling for the great Rajnikanth just adds to his quirkiness.

Kizie’s grey life is flipped and turned asunder with the arrival of Manny. Unlike the book, Kizie and Emmanuel a.k.a Manny meet at college, during one of its fests. In true Bollywood fashion, we get a solo dance number by Sushant on the title song, Dil Bechara. Despite being a little cringy, the number serves to lighten the gravity of the movie’s story.

Kizie and Manny meet again at their hospital’s cancer support group convention. Here we learn that Emmanuel is an osteosarcoma patient, currently in remission. We learn that he and his best friend JP are planning on making a Bhojpuri film. And Manny? He has his sights set on Kizie to be his heroine. The second time Manny persuades Kizie to join him on his motorbike, she agrees and he takes her to his favourite spot in the entire city.

A decrypt bus overlooking a lake, you can see Kizie falling in love with the place. And when our ears and hers fill with the melodious tunes of Abhimanyu Veer, we know this is it. Their place. A conversation ensues, with Manny explaining to her about the cigarette between her lips, among other things. If you know, you know.

You Fall In Love With Dil Bechara The Way You Fall Asleep: Slowly, Then All At Once.

Dil Bechara then progresses slowly, exploring not just Kizie and Emmanuel, but the stories of the other characters. My personal favourite is Kizie’s mom. A lot of people probably think of the dad as an awesome parent. For me however, Mrs.Basu is what makes the movie all the more authentic. Of Paatal Lok fame, Sulagna Mukherjee remains the adorable, slightly orthodox mother, always worried for Kizie. Mrs.Basu is very different from the mother in The Fault In Our Stars. That, however, just makes the movie more endearing to me.

Another personal favourite was the scene between Manny and Kizie’s father. A sweet soul, Kizie’s father seems to truly understand his daughter, and him. He sees the love they have begun to feel for each other even before they themselves have. Unlike an overprotective dad, Kizie’s dad wishes that Kizie truly live her life. He wishes she enjoy herself, regardless of the ever ticking time bomb in her lungs.

The Last Scenes Are Unwatchable, But In A Good Way.

Your Heart Breaks, But That’s Okay.

The eulogy is funny and sad and something I couldn’t sit through with dry eyes; I had to fast forward twice to escape the reality check it served. The final letter that Emmanuel writes for Kizie to Abhimanyu, is the same as the one in the book. And though Kizie is the one narrating it, you can hear Sushant’s voice in your head. The final scene of Dil Bechara is a montage of Kizie’s, Manny’s and JP’s adventure to make a Bhojpuri film. And just like the ones watching it, we leave with happy tears.

And when in the end Manny turns to the screen and says, “Seri, Kizie Basu?”, you say “Seri…” too. And that’s how it ends. The story of a sweet charming boy, and his sweet, charming love story.

I guess every scene of the movie is made poignant by the loss we have suffered. But we can’t find it within ourselves to be sad today. We can only smile a teary smile and cherish the life of Sushant Singh Rajput. We cherish it through Dil Bechara and all the other movies he has left us.  The wave has returned to the ocean. The stars shine bright tonight in remembrance of the shining beacon that was Sushant Singh Rajput.