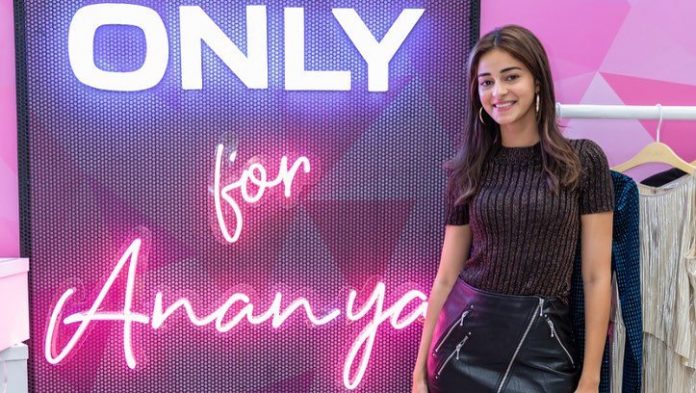 Ananya Pandey was born on 30th October 1998. She is a 21 years old actress and model, and the daughter of the famous actor, Chunky Pandey and his wife, Bhavana Pandey. She had completed her schooling from Dhirubhai Ambani International School. she is pursuing her graduation from University of Southern California, Los Angeles. She has a younger sister named Rysa Pandey. She is also very close to her cousins, Ahaan Pandey and Alana Pandey. Amidst all the things that made this star-studded actress popular, here are a few things that caught our attention:

Ananya Pandey started getting popular after signing the movie, Student of The Year 2, which is her first film. Here, she played the role of Shreya Randhawa, alongside Tiger Shroff (Rohan Sachdev) and Tara Sutaria (Mridula Chawla). The film didn’t gain a lot of appreciation and was often tagged as silly, illogical and boring by the audience, but most people believe that Ananya, if not the best, is certainly a better actor than her father. Kudos, Pandey Junior!

While promoting her first movie, Ananya boasted about her educational qualifications and how she managed to get into two universities-University of Southern California and New York University. But her schoolmate, who goes by the name AnnieePee on Instagram, started exposing her by saying that Ananya was apparently bluffing about getting into these universities. She also wrote-‘Apart from the USC drama; I hate when people claim to be hardworking when in reality they haven’t done anything to get where they are today’ about Ananya.

Clearing the air, daddy Chunky Pandey steps in, saying that her daughter did get into two universities but declined them because she was going to work in Bollywood. AnnieePee also made claims about Ananya’s character whereby, according to her, she would go around cheating on men, and use them for money and resources. Shortly after these confessions, she apparently received messages from Ananya’s official Instagram handle, in which she apologised and asked her to delete her posts. The posts have apparently been deleted, but they have all been reposted by Twitter and have gone viral.

Ananya In Koffee With Karan

After Ananya shared the couch with co-stars Tiger Shroff and Tara Sutaria on the sets of Koffee with Karan, a number of memes followed. Each of Ananya’s peculiar and funny expressions was made into memes, and were being shared on social media. She was sporting enough to share a few of them in her stories, with some hilarious captions. Apart from this, she was the only one on the show which openly confessed to not being deserving enough to be a part of it.

Ananya Pandey was slammed by the internet for wearing a pink blazer dress during her promotion for her upcoming film, Pati Patni Our Woh. This dress was apparently exclusively designed for the actress by Nauman Piyarji; but as it turns out, it was a copy of a dress made by Casey Cadwallader, who is the Creative Director for eminent fashion atelier, Mugler. The dress was ridiculed by many, and some people called it ‘poor fitted’ while others said that it looked like a ‘college assignment’ outfit.

The actress was trolled again, recently, for wearing distressed palazzos which made people wonder, ‘what kind of fashion is this?’. Not only that, but she was also wearing pink slippers, and had a Peppa pig strapped onto her Louis Vuitton bag. Better luck with the clothes next time, kiddo!

The star kid, who apparently got into two of the best universities, couldn’t even get the spelling of ‘Angels’ right. In a caption on Instagram, she wrote ‘Charlie’s Angles’ instead of ‘Angels’ and this took the social media by storm, and she was ridiculed and trolled by people, especially on Twitter. Later on, she took down the post and reposted the same, with the correct spelling. How old is she again, 21 or 12?

After Ananya’s debut in SOTY2, a number of people started saying that it was a result of nepotism, and Karan Johar was the flag bearer of the trend. She shuts down these comments through her performance, and in an interview, says that ‘I don’t think, people would put money on someone, whom they don’t believe it’. She also says that ‘Getting into a room with Karan was easy, but what you do inside the room, solely depends on you.’ But the question here is, would she have had the chance of even being in the same room as KJo, had she not been a star kid already?

Ananya Trolled For Comparing Her Father With Tony Stark

It seems like Ananya isn’t tired of being trolled already. She put up a picture with Farah Khan and her father Chunky Pandey, where he was sporting a semi-goatee and a rimless sunglass. She was ridiculed for drawing a comparison between her father and Robert Downey Jr. a.k. A Tony Stark in terms of looks. As a response to these trolls, she posted a throwback picture of her father with Tony Stark on her story, with captions like-‘Judwaaaaaa’ and ‘y u gotta h8’. But, comparing Chunky Pandey with the legendary Iron Man, was kinda..to much, right?

Ananya Pandey, in an interview, says that she has seen her father laugh at himself whenever there were memes, and he was trolled. She happened to learn this from him, and also enjoys laughing at her own memes and sharing them on social media because she finds them funny. The directors and actors of the film defended it from all the trolls and criticisms, by saying that it doesn’t show a real classroom scenario because it is superficial in the first place, and also because they wanted to promote sports and activities through the film.

Nonetheless, Ananya Pandey is not only yet to grow up but has a long way to go in terms of career. Her upcoming film is Pati Patni our Woh, with Kartik Aryan, and it releases on 6th December 2019. Let’s see how this duo performs in the film!