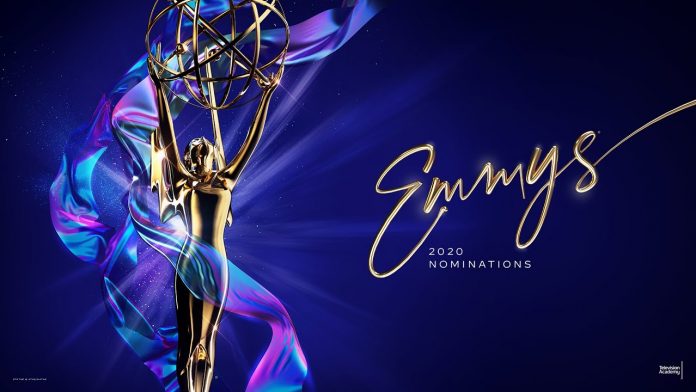 With the Covid-19 pandemic still raging in on full force throughout the world, this year’s awards shows have been different. Socially distanced viewing, and solitary performances have become the norm. The ACM – American Country Music Awards saw only Taylor Swift on a black stage and background singing ‘Betty’. There have been no thanking speeches, no group performances, and no barely racist anchors. But the best part of 2020’s award shows has come with the winners themselves. This year’s winners have brought with them diversity. With more attention going to some of the best of US television, here are the winners of the Emmys 2020.

This year’s biggest sweep on the Emmys was by comedy sitcom-esque style show Schitt’s Creek. A comedic take on a family of uppity rich people who have lost everything, Schitt’s Creek is top-tier comedy. With the talented father-son duo Eugene and Dan Levy and the fabulous Catherine ‘O’ Hara, Schitt’s Creek is a treasure. The show altogether swept away seven awards, with each lead role winning in their category. The show won in the following categories –

A comedy-drama series airing on HBO, Succession is a story of the filthy rich. The show encompasses a dysfunctional family of a patriarch and his three children who want to take over his business. The show is dark and witty, but not gruesome in any way. Jessie Armstrong is truly a visionary in this; Brian Cox makes you truly hate his character, but love his acting. Succession won for some of the biggest Emmys in 2020, including best drama series and directing for best drama series. The show won 5 awards at the Emmys, with a whopping 10 nominations. The show won in the following categories –

This year saw a slew of new actors snatch up the coveted best actor and supporting role awards. The Lead Actor in a Drama Series was won by Jeremy Strong for succession. The nominations included some of the best silver screen actors like Sterling K Brown, Jason Bateman. The best supporting actor for a drama series was won by Billy Crudup for The Morning Show. Featuring Jennifer Aniston, Steve Carell and Reese Witherspoon, this show aired on Apple TV. The Morning Show uncovered the dark side of morning show hosting, hence the name. The best actor for a comedy series was won by Eugene Levy for Schitt’s Creek.

Yahya Abdul Mateen II won an Emmy for Best supporting actor in a limited series. A dystopian superhero series, Watchmen is based on a DC comic series of the same name. The show follows a re-emerging white supremacist group looking to massacre the Tulsa police department due to ‘racial injustice’. And it has a bit of the old superhero magic thrown in. The show is dark, gripping and is terrifying due to how real it feels in relation to current events.

The award for best actor was won by Mark Ruffalo for I Know This Much Is True. The story follows the life of two twin brothers, both played by the actor himself. While one suffers from paranoid schizophrenia, the other has been managing him and a slew of other problems in life. The show is dark and tragic. The variation brought about in Mark Ruffalo’s acting between the twins is hauntingly mesmerising.

One of the highlights of this year’s Emmys came with the category of best actress in a drama series. Winning over veteran actresses, Zendaya Coleman became the youngest actress in Emmy history to win. She took home an Emmy for her role as Rue in high-school drama Euphoria. Following the life of a bunch of high schoolers, Euphoria is all about realistic high school. The show took praise by critics for its marvellous cinematography, costumes and background score.

Julia Gardener of Ozark fame won for the role of best-supporting actress for a drama series. Ozark follows the story of a family that suddenly relocates to the Ozarks. This is after a deal with with the Mexican drug cartel goes wrong. The father, played by Jason Bateman, sets up a bigger money laundering scheme here. However, things don’t really fall into place, but that’s for you to find out. The best actress in a limited series award has been awarded to the exceptional Regina King for her role in Watchmen. Whereas Catherine O Hara won the award for best actress in a comedy series. And Annie Murphy similarly took home the award for best supporting actress in a comedy series.

Last, there were many awards that were taken home that night, which were iconic moments in award history. Andrij Parekh and Jesse Armstrong won for the direction and writing of a drama series for Succession. Rupaul’s Drag Race won for best reality show, which was a delight to witness. Maria Schrader won an Emmy for best direction for a limited series on Unorthodox.

At the end of the day, this year’s Emmys while not being a huge crowd puller, was tasteful. The awards were all well deserved and we hope to see more of such Emmys in the future.

The World is Changing, Make Sure Your Attendance Machine is Up to It

A smart attendance management system can help you track the working hours of employees, ensuring that there is no breach of...
Read more
Tips & Tricks

Top 10 skills employees should focus on to avoid layoffs?

Over the past few months, the coronavirus pandemic turns out to be a huge setback for businesses. Earlier automation, digitization, private meetings,...
Read more
Tips & Tricks

Playing Lotteries has been there for a very long time. People all around the world test their luck to win some instant...
Read more

The World is Changing, Make Sure Your Attendance Machine is Up to It

A smart attendance management system can help you track the working hours of employees, ensuring that there is no breach of...
Read more
Tips & Tricks

Top 10 skills employees should focus on to avoid layoffs?

Over the past few months, the coronavirus pandemic turns out to be a huge setback for businesses. Earlier automation, digitization, private meetings,...
Read more
Tips & Tricks

Playing Lotteries has been there for a very long time. People all around the world test their luck to win some instant...
Read more
Lifestyle

Edinburgh, the capital city of dreamland Scotland and have some must-visit places. Whenever we think of a country’s capital, high-rise buildings,...
Read more
career

If you are planning to study MBBS, then studying MBBS from abroad is always the best option. Every aspiring medical student...
Read more

Ever since ancient times, man has fought ardently to establish his supremacy. Man is a highly competitive, extremely narcissistic, and dangerously territorial...
Read more
Blogging

We know Mahabharata is one of the greatest scriptures of Hindu mythology but it is also the longest poem ever written containing about 100,000...
Read more
social

There are 64 multi-industry companies started in India by Indians and many companies that are generating huge revenues, giving employment. Some of these companies...
Read more
Blogging

Motherhood ..... most beautiful feelings in the World. A pleasant experience beyond which there is no happiness in the world. After becoming...
Read more
Blogging

Big Dams – What Are The Benefits And Problems?

To be updated with all the latest news, offers and special announcements.

Earth is a great place to live. Though humans are moving ahead with the advance in technology, there are few people who...
Read more
Lifestyle

Street food doesn't only fill the stomach of many but also provides employment to many and also helps in the growth of the tourism...
Read more
College Campuses

Yes! I am going through a phase in my life where I am depressed more than ever. I… never really saw this coming! A...
Read more
Amazing world

The Constitution of India prohibits discrimination based on sex but it equally directs and empowers the government to undertake special measures for women. Though...
Read more
Lifestyle

When we listen to the words "Street food" what comes to our mind first? Most of the time we think it is...
Read more