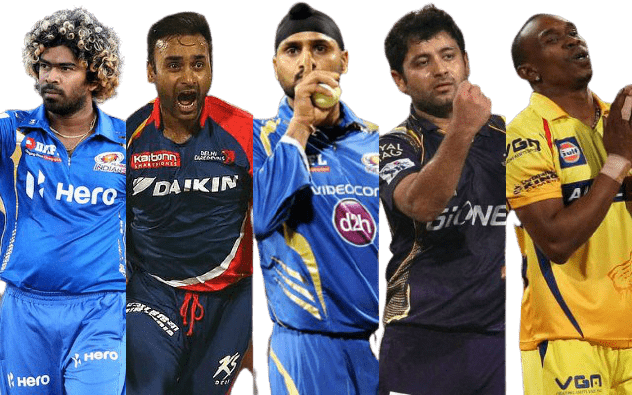 The Indian Premier League has produced great battles between bowlers and batsmen since it began back in 2007.

Fans love nothing more than their team’s star seamer steaming in or their talented spinner going on the attack, especially in the crucial powerplay period or death overs.

The league has seen some of cricket’s best white-ball bowlers show their ability year in, year out.

Wickets change matches and knowing the bowlers that have chalked up the most is the perfect way of judging their impact in the world’s most thrilling domestic T20 competition.

Here is a list of the top 10 IPL bowlers since the tournament began.

The Sri Lankan pacer sits at the top of the IPL wicket-taker table with 170 in 121 innings for the Mumbai Indians.

He joined Mumbai in 2009 and eventually announced his retirement from franchise cricket ahead of the 2021 campaign.

In that time, he won four IPL titles and became the tournament’s all-time leading wicket-taker.

Highlights include the time became the first bowler to reach 100 IPL wickets when clean bowling KXIP’s Parveen Kumar in Dharamsala and his remarkable five-for for just 13 runs against Delhi in 2011.

The spinner sits second in the all-time wicket-taker list after stints with a host of IPL franchises.

The Indian legbreak bowler has featured for Deccan Chargers, Delhi Capitals, Delhi Daredevils and Sunrisers Hyderabad between 2008 and 2021.

Mishra took six wickets for DC in four games before the IPL was suspended by the Coronavirus pandemic.

He will now be looking to push nearer Malinga’s record when the tournament resumes in the UAE in September.

Delhi are among the favourites with cricket betting sites to lift the title this year at around 3.75. The further they go in the contest the more likely Mishra will be able to narrow the gap at the top.

Another spinner still available for the IPL 2021 restart is Piyush Chawla.

He is third on the list of top 10 tournament bowlers with 156 wickets in 163 innings for Kings XI Punjab, Kolkata Knight Riders and Chennai Super Kings.

Chawla has two titles to his name and was snapped up in the IPL 2021 auction by defending champions Mumbai Indians.

He didn’t feature before the postponement but could yet add to his tally, especially if conditions in the UAE suit.

The West Indies all-rounder has secured 155 wickets in 140 innings in the IPL and is another, like Mishra, who has seen action in 2021.

He was bought from Mumbai by rivals Chennai in 2011 but then had a two-year stint with Gujarat before returning to CSK in 2018.

He became known for his excellent death bowling and picked up titles in 2011 and 2018.

Bravo has three wickets in four matches in this year’s tournament and could leap a few places with a good end to the competition.

The Indian spinner is just five wickets off Bravo in fourth after featuring for CSK, RCB and MI between 2008 and 2021.

He has also won four IPL titles in that time with both Mumbai and their big rivals Chennai Super Kings.

It was also under his captaincy that Mumbai won the 2011 Champions League T20. The off-spinner has taken wickets across all formats for this country.

The medium pacer is sixth on the list but has played less matches than those above him except for Malinga.

Bhuvneshwar has 139 wickets in 126 innings and has been with the Sunrisers Hyderabad since 2014.

He won the IPL title in 2016 with SRH and picked up the Purple Cap for his efforts as well.

He was initially handed an IPL opportunity by Royals Challengers Bangalore and then moved to Pune Warriors until that team dissolved and he found a home at Hyderabad.

Bhuvneshwar has been recognised as one of the best IPL bowlers since the tournament began and will be keen to fire himself up the top wicket-taker list.

Ashwin is yet another India spinner to make the top 10. He has 138 wickets in 154 innings but is still able to add to his tally.

He has played for a host of different franchises since 2009, including Chennai Super Kings, Delhi Capitals, KXIP and Rising Pune Supergiants.

The bowling all-rounder’s success in T20 cricket led him to recognition with India across all formats.

He is also playing for Delhi in IPL 2021 and could have a good opportunity to pick up more wickets on the dry pitches of the UAE.

Unlike anyone else on this list, he has only ever played for one IPL franchise so far, Kolkata Knight Riders.

The Windies international star has been with them since 2012 and is also an off-spinner that has explosive all-round capabilities.

Narine is a regular performer in other T20 franchise leagues around the world but quickly made his mark in the IPL. He has the lowest economy rate of any other bowler in the top 10 at 6.76.

He was first with Mumbai Indians in 2011 but struggled to feature for them before being snapped up by RCB in 2014.

Chahal significantly boosted his figures in IPL 2020 with 21 wickets in 15 matches in the UAE.

The fact the tournament is returning there for this year’s restart, as well as the current strength of RCB, means he could now add even more wickets to his already impressive tally.

Completing the top 10 of IPL bowlers is another all-round in Ravindra Jadeja.

So far, he has taken 120 wickets in 162 innings and continues to be a top performer when each IPL campaign rolls around.

Between 2008 and the current season he has played for Chennai Super Kings, Gujarat Lions, Kochi Kerala and Rajasthan Royals.

In 2019 he became the quickest left-arm bowler to reach 200 Test wickets, which underlines his ability across all formats.

He is another that enjoyed a previous IPL season in the UAE and could push himself further into the top 10 with another fruitful end to IPL 2021.

The top 10 of IPL wicket-takers is an impressive list of some of some of the best bowlers in the sport. It is also dominated by spinners, even though it is pace bowler Malinga that still sits at the top.

The placings are currently close enough for them to change over the course of the current IPL season.

Another thing we could see is other names break into this list. The likes of Jasprit Bumrah, Chris Morris and Rashid Khan continue to push higher up the table.

Top 10 Extraordinary and Unique Career Options to Kindle your Interests