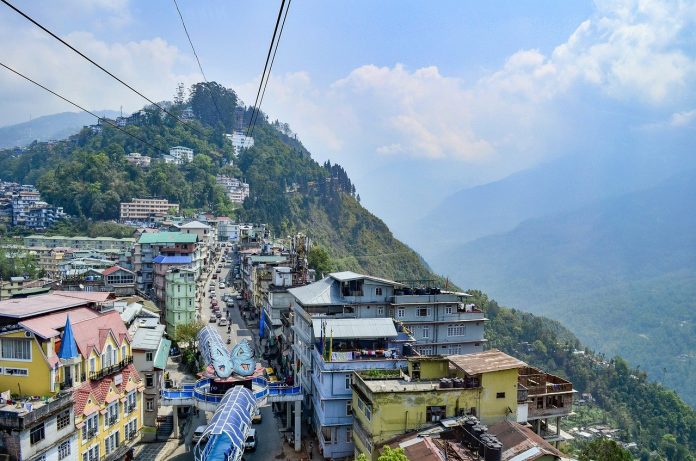 While the capital of India is striving to survive the hazardous air pollution that has crept into the atmosphere, another state of India has been successful in breathing green! IT is none other than the north eastern state of Sikkim. Once, a monarchy, this state became annexed to the Indian subcontinent in the year 1975, proudly boasts of being the first absolutely open defecation free state in the country! Wondering how?

Well, when the Swachch Bharat Mission of the present government is an initiative to ensure that the states are clean and tidy in every respect, the Swachch (cleanliness) survey conducted by the National Sample Survey Office (NSSO) declared that four districts of Sikkim has been ranking among the top ten in terms of cleanliness and sanitation. Approximately 98.2% of the houses in the state have the provision of clean toilets, whereas 100% of the household boasts of community or individual toilets.

No, it is not absolutely a one-year plan that the state has been able to upgrade its cleanliness quotient. Long before the present Prime Minister of India, Narendra Modi launched the Swachch Bharat Mission, the state government had initiated their cleanliness drive. About 13 years ago, the Chamling government in the state began the sanitation campaign for the state. Thus, the state got towards establishing its cleanliness drive after years of the initiative by the government and active participation of the people residing there. The tag of the “cleanest state” is indeed a great honor bestowed upon the state and it’s citizens to celebrate their hard work towards sanitation and cleanliness.

The initial approach to this program was public sensitization. The government took up the initiative to make the inmates of the state aware of the importance of proper sanitation. It made it evident to the students that a clean environment is of utmost importance for a healthy life. The people were motivated to protect their natural habitat, improve sanitation and make the ambiance hygienic for a better life. Thus, people have been encouraged to look after and protect their environment.

The next measure which the government took up was setting up latrines for the household. They were successful in implementing their objective of setting up toilets in 98,043 houses which exceeded their estimation of 87,014. Out of these around 69,000 toilets were set up for the residents below the poverty line (BPL).

Besides, improving sanitation in the household, the government was conscious of installing public filters in order to ensure clean drinking water. Public toilets were set up at frequent intervals in order to make the use of toilets a natural instinct. Moreover, measures were undertaken to improve the drainage facility of big cities like Namchi and the capital city of Gangtok.

Since the household is not just part of the society, the envisioned having proper sanitation in school. Approximately 1772 schools in the state were incorporated under the provision of providing proper sanitation. Under the Nirmal Bharat scheme launched by the central government, the Sikkim state government was successful in implementing proper sanitation in the schools. The local panchayats and local governing bodies were involved to make this initiative reach the desired target. The local governing bodies took great endeavor to sensitize the inhabitants. They successfully made it evident to them that Sikkim as a tourism state needed to maintain a green and clean image to the world. This can be achieved if the locals cooperate to maintain a properly sanitized and healthy environment.

The task was indeed tedious. They were zealous enough to initiate a door to door campaign in the state. This would enable to reach out to every household and make them aware. Besides, school children were included in this program, such that they can make their families aware of the health benefits of using a toilet.

Adolescent girls need special sanitary requirements, and the government was very diligent in looking after this requirement. It made a point to introduce gender sensitized sanitary programs in school under the School Sanitation and Hygiene Program of TSC so that requirements of the girl child in their puberty is met. Primarily, two schools per district were provided with the sanitary wending machine along with a dispenser. A child can drop INR2 to receive a fresh sanitary napkin and could easily dispose them of using the dispenser. The napkins are disposed of using a method of incineration. Later with an enigmatic response, a greater number of schools were incorporated.

Alongside all these measures, the government also introduced a waste management system and implemented various laws and rules ensuring proper execution. These enthusiastic measures adopted by the government indeed bore its fruits with each passing year.

Why is the cleanliness model persistent in the state?

A question may arise that although steps are taken, they are never long term. This vision was completely negated by the Sikkim government. The state not only boasts of their cleanliness but has maintained it for years now. The consistency in cleanliness drive has not come about on its own. Here too, the legislature played their part well along with the effective participation of the citizens.

Their law is strictly enforced, and a penalty needs to be paid if you smoke in public, urinate on the streets, spit on the streets or use plastic. The state has completely banned the use of plastic, which is another green measure for protecting the Earth. A penalty of INR200 for smoking and INR 500 for urinating are to be paid if the rules are violated by either tourists or locals.

There are separate smoking rooms in the capital city designated for the purpose. Besides, the locals are super passionate about their state and environment, and this has also made the project successful and still functional.

All these hard works have not gone in vain! It received two honors at the Swachch Bharat Awards in 2018. “The Cleanest State” was bestowed on it and the Eastern district received the “Cleanest District” Award. Besides, in 2016, the state was tagged as the First Organic State in India, as they shunned the use of chemical fertilizers in the production of their food and vegetables. In the year 2008, it was declared as ‘Nirmal Rajya’ for the outstanding cleanliness measures and great sanitation programs.

With all this feather to its cap, the state moves on to achieve more in terms of its environment. Although plastic is banned still PET bottles are observed disposed of by tourists. The government plan to absolutely bans them soon planning of RO purified water in kiosks around the state. Water needs to be accessed from the designated public water purifiers, restaurants and hotels.

With a mere 8% of people living below the poverty line, Sikkim is also on the mission of completely nullifying poverty. Soon, it envisions itself to emerge as a state with zero poverty!

These are indeed great projects and the constant participation of the government with the public will indeed make it the healthiest state to prosper. As you walk down the mountain roads of Sikkim, it gives you a breath of fresh air from all the pollution of the metro cities. It is a perfect green abode of wonderful association with nature!