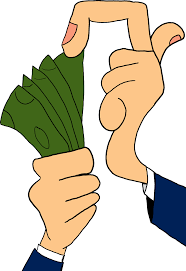 After looking at the newspaper first thing that came into my mind was what is a scam .The answer to my question was very simple; a scam is an attempt to defraud a person or group of people by gaining their confidence. From childhood onward I have been taught by my elders that Honesty is the best policy. But when I look at the people who defraud other people for money, first thing that came into my mind  is did their elders didn’t taught them the same lesson that my elders have taught me or these people have changed their priority  from moral education to money. Nowadays people have become so much money minded that for them they can do anything to earn money whether it is morally correct or not.

Till now there are so many people who are not aware about the fact that the money involved in these scam is directly or indirectly their own money that they have paid to the government in the form of taxes.  These Scams adversely impacts the economy of any nation and too many scams could result in major economic decline. Also  these Scams damages the economic outlook of a nation resulting in loss of FIIs(Foreign Institutional Investment) & FDIs(Foreign direct investment ).So directly or indirectly people involved in these scam are betraying the economy of their country.

In last few years India has witnessed a large number of scams where public money has been looted by the politicians and bureaucrats. Involvement of Government ministers in these scams clearly depicts a sad picture of the democracy. It also portrays loss of credibility with regard to governance. In India the working class has to pay a huge part of their salary as Income Tax to Government for the development and betterment of the country. Such scams results in strong resentment among the tax payers when they realize that there are hard earned contribution has been looted in scams.

Corruption has been there is in the roots of India after independence .The first scam that came into notice was Jeep scandal case which took place in the year 1948. The most famous scandal of that time was the Mundhara scandal which took place in the year 1951 in which 12 million rupees (US$180,000) was involved and the teja loan scandal (1960) in which 220 million rupees was involved.

Then there was a major turning point in the politics and economy of our country i.e.  When Coal allocation scam (or Coalgate) and 2G scam came under notice. CAG is a major political scandal concerning the Indian government’s allocation of the nation’s coal deposits to public sector entities (PSEs) and private companies and The 2G spectrum scam was an Indian telecommunications scam and political scandal in which politicians and government officials under the Indian National Congress (Congress) coalition government undercharged mobile telephone companies for frequency allocation licenses, which they then used to create 2G spectrum subscriptions for cell phones. Recent scams involved Vyapam scam in M.P which causes various death in M.P and Bihar topper’s scam in which the toppers didn’t have the basic knowledge of the subject.

After reading about these spectrum I thought why these people does then I found various causes some of them are given below.

But the government has also taken various steps in order to reduce corruption and to bring back black money from various foreign banks. Also Narendra Modi is bringing systematic changes in our system which will help India in long run.The steps that he is taking will not just allow to catch corrupts but prevent corruption from happening. He is bringing in transparency and infusing technology. By e-auction of coal mines and e-auction of Spectre.

Last but not least I would like to conclude by a nice quote i.e. Corruption is like a Ball of snow, once its set rolling it will go on increasing .Despite of various effects by the government corruption is   there in India but the government is giving taking various steps to reduce corruption and hopefully corruption will reduce in future. But this corruption can reduce only when people change their priorit