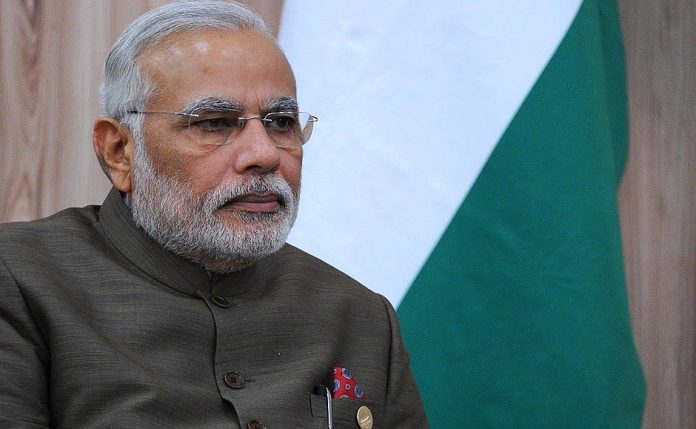 Narendra Damodardas Modi – The name has a beat to it. Born on 17th September 1950 to parents Damodardas Mulchand Modi and Heeraben Modi at Vadnagar, Modi was a person who believed in serving the nation with a right purpose.

Though people mock him many times as a tea-seller, this lad at the age of eight joined RSS (Rashtriya Swayamseva Sangha) beginning his long association with the organization. After his duties in The RSS, the organization assigned him to the BJP (Bharatiya Janata Party) in the year 1985 after the emergency was imposed in the country, due to which he was forced to go into hiding.

He held several positions in the party, from a party man to an activist to a staunch worker because of which he was promoted to the rank of General Secretary of the party in 2001.

Rise as Chief Minister of Gujarat:

Though his administrative capabilities have come under the scanner following the Gujarat riots in 2002, the love of people on him never altered as he was unanimously elected for the next 3 elections. Gujarat improved in many dimensions under the administration of Narendra Modi.

The Prime Minister of India:

Due to his governance in Gujarat, Narendra Modi had already become a household name and he was also the longest-serving chief minister for the Bharatiya Janata Party in the State. These factors led the BJP to escalate Narendra Modi as a prominent face for the Prime Minister in the upcoming elections. True to their instincts the people of India especially the youth impressed by his abilities elected the Bharatiya Janata Party with a record number of seats decimating the Congress Party totally.

The media back then called it the “NAMO Wave” some people even referring to it the tsunami. He was elected as the Prime Minister and in history, it was the first time that a prime minister bowed down towards his office before taking charge of it.

Achievements under His Tenure:

The Swacch Bharat Abhiyaan, Beti Bachao Beti Padhao, Digital India, Make in India, LPG Subsidy, Bhim UPI, Jan Dhan Account. Goods and Service Tax are some of the major achievements in his tenure. Surgical Strike on Pakistan showed the other nations what the Indian soldiers are capable of doing. Security of the Nation is so mesmerizing that not even a single blast has happened anywhere in these 5 years.

The word corruption is out of search among his cabinet of ministers. His strategy of diplomacy and administration is worth praising. Though some of his works have come under the radar of being a total disappointment even the Great Alexander had failed sometimes.

People may have wrong opinions on Goods and Service Tax as well as Demonetization, but today the Gross Domestic Product (GDP) of India has increased to a very good level. The Economic growth of the country is constantly improving. Today Indian Railways have become such a good network that just by a tweet the action will be taken by officials in minutes.

Today the trains in Railways are maintained so neat and tidy that it seems like every day a new train is arriving. People still cry a lot about the Statue of Unity, but less do these people know that because of this monumental structure many people have got employment in the nearby areas as shop workers and also as maintenance workers for this place.

Why He Is Still The Best In The Business:

When America has a Statue of Liberty why cannot we have a Statue of Unity dedicated to a person because of whom we are able to travel to various parts of India without any troubles? We Indians are such diplomats that we celebrate the achievements of other countries, but when it comes to our country we criticize it.

Show me a news channel whichever criticized Obama in America, But I will show you many of them who criticize Narendra Modi in India. This is a clear cut example of Right to Speech being utilized in a bad way. Show me any Prime Minister before who celebrated Diwali with the soldiers in the border.

Yes, Modi has some negatives as no man is perfect but each and every Indian knows that he is still the hope for this country. Give me a single valid reason why are all the parties coming together to defeat a single person.

Is it because Modi is corrupt? Or is it to serve the Nation? If Modi is corrupt then why didn’t they come together in 2014? If it is about serving the nation then why couldn’t they join the hands 10 years ago? Something is fishy right? Why each and every person in India is speaking only about Modi? Didn’t any other politician exist before him? Show me a PM who speaks to the nation once in a month?

Show me a PM who speaks to students and motivates them during their exams? If someone calls this a publicity stunt to gain votes then why didn’t they try it before? Where they scared that people will get motivated and do not vote them? Yes, Modi does a lot of publicity. But if he doesn’t let his works known to the people then how will they even know?

Nothing comes free of cost and even Modi knows it. Is there any leader in this country who is mature enough to handle the whole heat of the country? Or do you people think that a bunch of people coming together will do something good for this country? Four years they will be quarreling within themselves for cabinet posts and last year they will again showcase some fake promises.

It is tough to be Narendra Modi and trust me the nation still believes this man will take the country forward. I am not a staunch follower of Modi, but I do trust that he has the capabilities which others lack. And he definitely deserves another chance because Even Rome was not built in a single day.