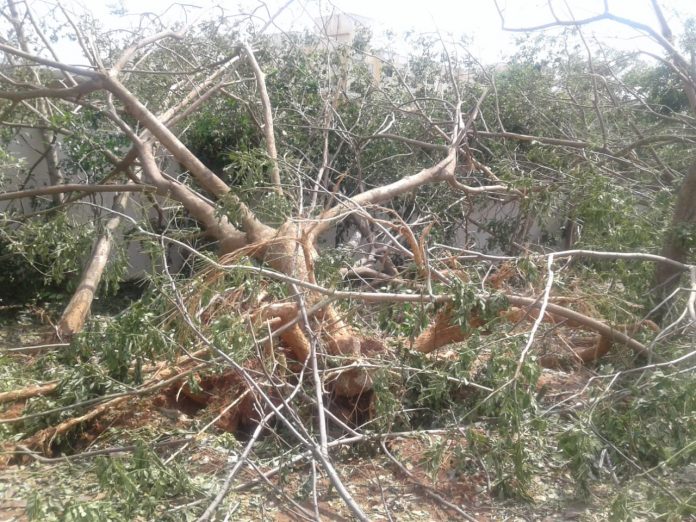 The term “cyclone” can be defined as a violent wind that moves in a circular pattern.As predicted by the Indian Metrological Department a severe cyclonic storm was set to make landfall on the coastal state of Odisha.It was named Cycone Fani and was originated from a tropical depression that formed in the West of Sumatra in the Indian Ocean around 26th of April .

The landfall of the cyclone started at around 9 a.m on May ,3rd on Chandbali South  Town in Puri Odisha.With winds gusting to maximum speed of 200 kmph ,the cyclone affected parts of AndhraPradesh and West Bengal too.

Several parts of Odisha like Puri,Jahatsinghpur,Kendrapara,Bhadrak,Mayurbhanj,Khordha,Balasore ,Cuttack,Jajpur ,Gajapati,Ganjam received heavy rainfall with winds of high speed gushing at around 145-200 kmph

Puri had the maximum casualties.An official said that water supply was badly affected in 20 Odisha towns due to the cyclonic storm while 21,000 street lights were affected too.

Cyclone Fani  damaged Rs 525 crore worth of assets according to the Odisha Housing and Urban Development department .However as this cyclone was detected to be a severe cyclone from before the Odisha Government took several precautions that saved many lives.

The death toll in Odisha due to Cyclone Fani wass 64 in Puri and the maximum number of casualties were said to be 39.

After the storm catered to winds gushing at a high speed at 145-200kmph, several damages took place as mentioned before.

The storm continued for about 2-3 hours with very heavy rainfall.Places like Puri ,Khurda and Ganjan received large destruction.Since the afternoon the speed of the wind lessened gradually but the rainfall continued all day along.Rainfall continued even during the night.Because of heavy storm electric poles fell down andthus electricity problem started to occur. The whole city of Bhubaneswar was plunged into darkness and the connectivity was completely lost as mobile phones weren’t working because of unavailability of network. Stocks of food and water almost started to finish.After two days the mobile network were available only in few scattered areas. Generators and inverters provided electricity supplies to several institutions for days. Colleges and school declared holidays and people had to wait for days for the normal functioning of trains and flights.People were provided with food and water in Gurudwaras nearby and everybody is in hope the destruction will minimise and the plight of the people in Odisha would be normal soon.