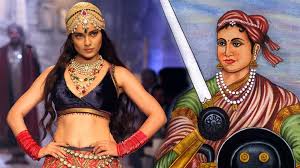 After her impeccable performance in ‘Simran’, actress Kangana Ranaut is toiling for her next movie ‘Manikarnika: The Queen Of Jhansi‘. This movie is helmed by director Krish and is steeped in acts of grit and determination by Rani Laxmibai which will be portrayed by ‘Tanu Weds Manu’ actress. 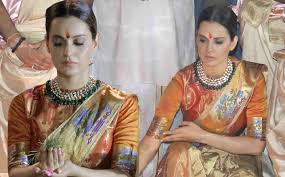 This movie has Kangana Ranaut in the titular role and is one of the most awaited movies of Bollywood. Kangana Ranaut has always impressed audience with her strong acting performances, so this movie too has sky-high expectations. This epic-biographical film is about the life of Rani Laxmi Bai of Jhansi whose heroic deeds and acts of courage against Britishers are celebrated on our soil time and again. Sonu Sood will also be seen in pivotal role in this flick along with ‘Masaan’ actress Shweta Tripathi, who will portray the role of trusted ally of ‘Laxmibai’. 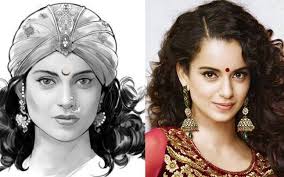 The first look of the actress has come out in the form of a sketch which has made cine-goers impatient to the optimum level. Kangana is seen in short hairdo with a turban which is adding beauty to her regal look! A nose-ring and a ‘tika’ is adding authenticity to her appearance.

The scheduled release date of the film is 27 April 2018. According to a source, Kangana has gone through rigorous training sessions of sword-fighting to bring this character to life and has possibly left no stone unturned to do justice to the part. The shoot of the movie is still going and the hype associated to the film will surely lead cine-buffs to the theatres!