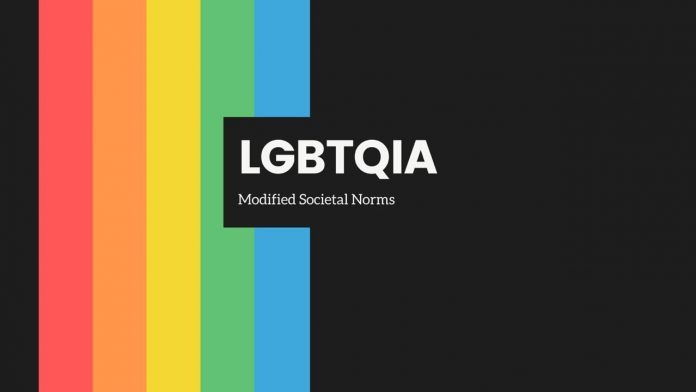 For generations now, the society has been functioning on standardized principles that have been followed so diligently that it becomes almost impossible to question whether they really assist falsehood. It is as if every person, born into this vicious circle, has been trained to accept its fate without raising voices. However, when someone actually musters the courage to stand against the practice, to defend their interests, to live life according to their will, they are termed as an “outcast” or for that matter, a disgrace to the society. This is exactly what is responsible for the rage, mental outbreaks and loss of sense of belongingness and hence, cracks in the community of people.

Comprehending LGBTQIA is not really that big of a task if one really empathises let alone identifies with them. Now, the major part is to gain an insight into the initialism and navigate our way through the entire community.

A lesbian is a homosexual woman. As history bears witness to certain distressing occasions when women had their struggles to come out, homosexuality is still a taboo in many South Asian communities. There exist certain examples of women helping other lesbians to come out and garner worldwide support. Throwing women out of their houses upon coming out has been reported increasingly. As disturbing as this sounds, they were also married to a man for the sake of keeping their religion. The path has been difficult but there’s still hope as we are progressing into transformational times. Social media has helped gain exposure to this matter. The easy truth is that there is a tiny difference of a ‘hyphen’ in girl-friend and girlfriend and it is high time we accept that.

A gay is a homosexual man. They are not regarded as ‘gentlemen’ in some cultures. But nobody realises that for a gay to come out of the closet is a challenge of its own. It is an insult to their sex. Recently, there has been significant progress, but there is more to go. Gay pride did not emerge to celebrate being gay, rather it was born to gain their existing right, to make a statement that they deserve ordinary lives. A gay man is every bit equal to a straight man and nothing less.

A bisexual is attracted to the same sex and the opposite sex in varying degrees. This means that a person doesn’t necessarily have to be exclusively homosexual or heterosexual but can be both. The LGBTQ+ culture recognises a social life that is beyond the society. There’s still a stigma attached to identifying someone as a bisexual as society loves to believe that it is a make-believe term and would rather accept it as a disease or mental illness. First, due to their population in the LGBTQ+ community being relatively small and second due to accepting them as gay/lesbian when in a homosexual relationship and not a part of the LGBTQ+ community when in a heterosexual relationship. The sexual attraction split can be anything and not necessarily a normalised 50-50. Indubitably, “The only thing that’s a phase is this Homophobia.”

A person who doesn’t identify with the sex assigned to them at the time of their birth is termed as a Transgender and the one who identifies with the same is a Cisgender. The community is always a subject of judgement for the society. It is the process of a medical transition but it really is a way to love one-self and more importantly accepting oneself as they are without any alterations. Misgendering prevails in this community. The key point here is to be extremely careful while using the pronouns they use.

An essential part of the LGBTQ+ community, queer means “peculiar”. The concept of identifying oneself as queer is quite recent when questions arose as to who a person really is. Being queer is to question one’s desires. There can never be a definition here as this term is all about formulating and deciding upon your subjective definition. A while ago, “queer” was also used for gay, lesbian or bisexual communities. However, identifying with one community got easier after attaining clarity. Queer became a complimentary word. Homosexual or heterosexual, queer or no queer, the essence of it all is to identify with yourself.

The “+” sign adds Intersex to the spectrum. A person who is born with sex characteristics including genitalia, chromosomes, reproductive organs or hormones not corresponding with male or female is termed as an intersex individual. According to experts, between 0.05% to 1.7% of the population is born with intersexual traits. In some cases, these traits become quite evident at the birth and if not then, probably later when the individuals hit puberty. To conform them to the standards i.e. binary characteristics, these people undergo surgeries. It is only ethical to let the intersex individual be fully aware of their options before deciding upon anything for themselves regarding their bodies.

The last but not the least, we arrive at asexual. An asexual person experiences a difference in the degree of sexual attraction as compared to a sexual person. Now this shall not be misinterpreted as someone who is willingly asexual or celibate. There might be a little or even no sexual attraction in the case of an asexual person. “Ace” is the umbrella term for Asexuality. An ace can be of any gender and be attracted to anyone. This community suffers due to inappropriate visibility.

This brings us to sexual orientation and all the communities in themselves are an intrinsic part of a person’s identity. Comprehending the LGBTQIA community begins when we accept and broaden our mindsets to their existence. It is only then that this community can reach a comfort level and have a sense of belongingness in the world that they were born just as everyone else out there. To show our respect and love for them, it is also important to not assume their pronouns and ask them about the pronouns they prefer. It never hurts to ask and grab the due knowledge. The spectrum is as varied and as colourful as one can imagine. It reiterates the pride that the LGBTQIA community shares and uplifts.

LGBTQIA is not a taboo.
LGBTQIA is just unaccustomed, paving its way to accustom.