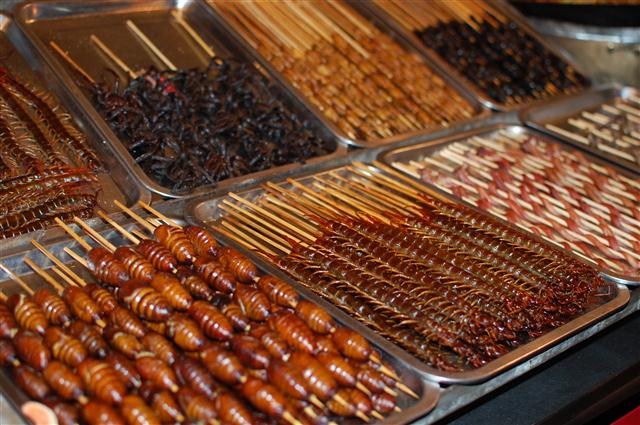 Every different continent, country, state or even a small geographical area has a different culture which is very typical to it and so are the food habits. It is said that we are what we eat.

Almost everyone is conscious about the hygiene of their food. By the word hygiene here, we not only point to the fact that the food we are taking is properly cleaned and cooked in hygienic method but also our food or veggies are free of any kind of worms or insects.

But, the scenario is changing now a days. New trends or we can say weird trends are emerging rapidly in food habits. While the idea of having a stir fried cockroach for lunch may appeal to some (ewww) but it’s definitely a big No No for me. I would never ever think about eating those innocent but creepy insects. To some, considering worms and insects as non edible is just a psychological inefficiency.

Let’s have a look at some of the creepy food trends which are being liked by a great number of people around the world.

Why not start with one of the latest invention of the hot list. It’s called Critters Bitters. These are nothing but cocktail bitters made from toasted grasshopper like insects, crickets. These bitters are invented by Lucy Knops and Julia Plevin. According to them eating bugs might even save the world. Well, good logic!!!!

Another player in the same league is These are also Cocktail bitters made from crushed cochineal insects which provides its typical red color.While We Indians are not accustomed of encountering a stall which offers worms and insects as snacks but, it’s very common for Thai people. Thailand has a lot to offer when it comes to food made from bugs.

The word Non means worms and Pai means bamboo in Thai. It is also called “Rot Duan” that means “Fast Train”. It is one of the most popular snack and seasoned with Thai peppers.

This dish contains a common grasshopper that is said to damage the rice crop and the Thai farmers found took their revenge by collecting and selling them to the vendors. The vendors fry those grasshoppers and offer as a snack. Revenge accomplished!!

It’s MY point of view on Entomophagy. For those of us who have never heard or read about Entomophagy, it’s the official name for eating insects.

So, back to the point, this is what I think about eating bugs. But, different people have different choices. It’s completely okay to follow a food habit that may sound creepy to someone else.

You can leave your opinion on Entomophagy in the comment section below.