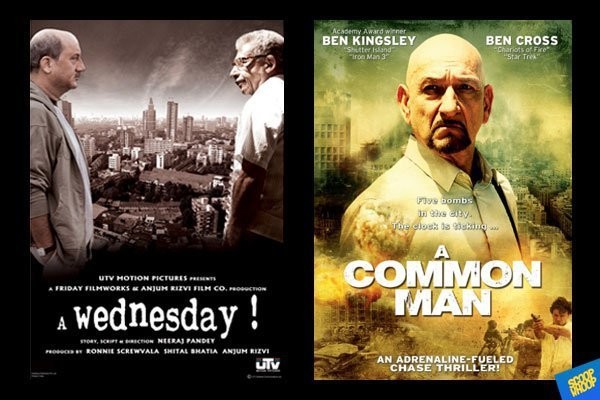 ‘A Wednesday’, a super hit movie, that we all loved, was released in September, 2008. I guess the directors from Hollywood loved it a bit too much. Not just inspired, ‘A common Man’ is actually an official remake of Neeraj’s ‘A Wednesday’.

The basic idea of the plot of ‘Delivery Man’ was inspired by ‘Vicky Donor’, i.e., sperm donation. The only difference being, that Vince had 553 children instead of 53 of Ayyushman’s children.

Apart from the direct translation of the movie names, the plot is also kind of similar. The typical love triangle and the ultimate stalker, is adapted in the movie ‘Fear’.

The story of a girl stuck between choosing a movie star and her best friend. The love triangle is just the same in the two movies.  Excluding the part that Aamir played, everything else was adapted.

Both their plots were not so similar, but the action sequences were more or less the same, which Quentin agreed to, himself.

The only difference in the two movies being that ‘Sangam’ had only one character as a pilot, where ‘Pearl Harbor’ had both of them as pilots. The rest of the story, the typical love triangle between two best friends and a girl, and all that, was quite similar.

They hate to admit, but the makers of ‘Leap Year’ say that they have not copied the plot from anywhere. But wait, let’s decide for ourselves. A chirpy, bubbly girl, going to propose her boyfriend meets a guy on her way. After that, them sharing a hotel room , separating later on, but coming together at the end, and get married.