The movie Angry Bird an outstanding app adapted movie of the year 2016. This movie is a computer animated action-adventure comedy film. The film Angry Bird is based on the very successful video game series of the same name. The very idea of this movie came from the success of the Angry Birds Toons series. 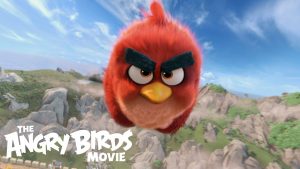 The story of this movie is about a Bird Island inhabited by flightless birds. Red plays the leading animated character, who is a reclusive and grumpy clown. Red had lost his temper, which caused a premature hatching of a costumer’s egg and hence he is sentenced to anger management class.  Chuck, Bomb, and Terence are his classmates. These are the main characters of the movie and Red is the hero, who courageously saves the three eggs stolen by the piggy from the Piggy Island. The pigs enter into the Bird Island with an offering of friendship and peace, but Red is suspicious of their hidden motives. At first Red seeks help from Mighty Eagle, who is said to be the protector and the only bird in the Island who could fly. However, Red and his friends had a disappointing encounter with the Mighty Eagle, as he was overweight and largely in retirement. Nevertheless, Red takes the yoke on himself to rescue the stole eggs. The flightless angry birds attack the walled city of the pigs with the help of the same sling, which was gifted by the pigs. Red runs over his life to save the three eggs, which the pigs had stolen and were planning to cook and eat them. The Piggy’s island is destroyed by there own reserve of explosives. Red rescues the three little eggs, which hatches as a result of the explosion. Hence, Red is given a new home and is declared to be the hero of the Bird Island.

The Cast and Crew

The movie Angry Bird is breaking records worldwide and earning big bucks at the box office. The movie has broke records for the May opening as an original animated feature film with $43 million haul.

The movie has written a new history of being the most accepted and loved video game movie, which were once very poorly received. The success of the movie Angry Bird should indeed be an encouragement for various other game studios that are starting to look into film development.