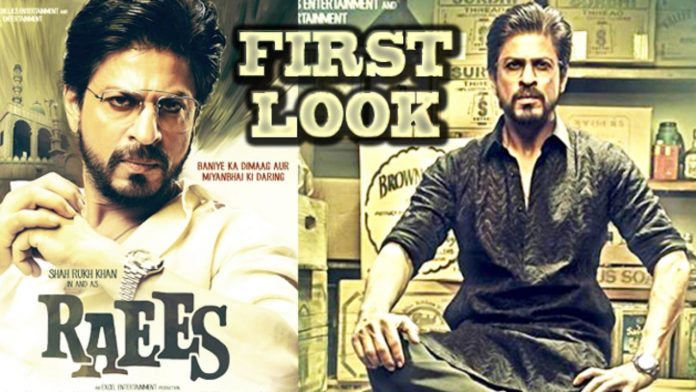 1. Raees’ Starring SRK plays a character apparently inspired by Abdul Latif, an alleged gangster who ran the illicit liquor business in Gujarat during the peak of prohibition in the 1990s. Allegedly, Latif had over 40 murder cases filled against him.  The film is set in 1980s Gujarat. It tells the story of the bootlegger Raees Alam whose business is extremely challenged and eventually defeated by a police officer, ACP Ghulam Patel.

2. Things can’t be better if you have an ace actor like Nawazuddin Siddiqui on one side and the King of Bollywood, Shah Rukh Khan on the other. Well, this– SRK and Nawaz sharing screen space– is a sight every movie maniac is looking forward to. After working with Aamir Khan in ‘Talaash’ and Salman Khan in ‘Kick’ and ‘Bajrangi Bhaijaan,’ Nawazuddin will now be seen with SRK in ‘Raees.’ The actor is playing a cop in the movie and his look from the film just got leaked. The khaki vardi is suiting him and the stern expressions that he wears on his face will definitely make the audience go whistling. Directed by Rahul Dholakia, ‘Raees’ is slated to release in the year 2017.

3. Pakistani actress Mahira Khan, who rose to fame with her television serial Humsafar, makes her Bollywood debut opposite Shah Rukh Khan in Raees. According to reports, SRK himself dropped in at the audition to meet this VJ–turned–actress, Mahira. The actress is married to her college sweetheart Ali Askari. However, the film‘s release might be jeopardised considering that Shiv Sena have vowed to not let Pakistani actors promote their film in Maharashtra. According to a report on Bollywoodlife.com, apparently, the actress got the jitters with an intimate scene with Nawaz. Quoting a source, the report stated that the sex scene is pretty edgy, dark and somewhat brutal which has Nawaz forcing himself on her. The report further stated that the sequence was unsettling for Mahira and she refused to do it.

4. Ankita Shorey the winner of Femina Miss India International 2011 was first considered for the role in SRK movie Raees which finally went to pakistani actress Mahira Khan. “I went through the look test for the role as it is a character of a Pakistani Muslim girl, andthey (filmmaker/producers) were looking for a certain face. I waited for six months for the confirmation of the role. However, there was a last–minute change,” the model–turned–actress told IANS. Though it could have been a great launch for her opposite Shah Rukh, Ankita does not have any bad feelings for anyone for missing the opportunity.

5. Shah Rukh, 50, is shaking a leg with Sunny in a reprise version of the 1980 chartbuster Laila O Laila from the film Qurbaani. The original track featured Feroz Khan and Zeenat Amaan.

A special set has been created at Mehboob studio.

“It‘s a dance track, an item number which is part of the film and not an end–credit song. The set is that of an old retro bar. The situation is that it is a bar where they are selling alcohol in the pretext of selling cold drinks. That is where Sunny is dancing,” a source from the set told PTI.