Unity in Diversity or is it just Hypocrisy? 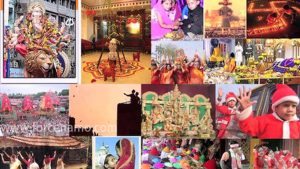 India, a place where diversity thrives in its fullest form, a place which is said to be the archetype of unity in diversity, is appreciated for the assortment of life forms and cultures that flourish here. Indeed, it is a land where you find a miscellany of traditions, customs, norms, religions and ethnicities besides diverse life forms. Every person who is asked to quote words of admiration for the country does not forget to mention the variety and multiplicity of things found here. But do you think with all the existing diversity in India, there is as much unity as is projected to be, is India as united as it’s people, it’s political and social leaders and various celebrities have claimed it to be on both national as well as international forums. My own experience suggests the contrary. One thing is certain that you will find diversity in every nook and corner of the country, but speaking of unity, well, there are very hypocritical standards for it. India is a major religious centre for a number of religions such as Hinduism, Islam, Jainism, Buddhism and Zoroastrianism to name a few, people belonging to these religions easily claim to respect the other religions. But is this claim true? I guess not, I have seen these very people making such high claims perform deeds contrary to them, they mock the Gods and Goddesses of another religion, they claim their religion to be the one that should be followed and quote all others as false, they emphasize the rectitude and piousness of their own practices, culture, traditions, customs while accusing others culture, practices and traditions to be diabolical, they claim themselves to be the believers while others who are of a different religion to be non-believers, these people fight over bans on cow and pig slaughter, or over construction of temples, mosques and church, you might question what is the evidence for all of this, well, there are ample instances that make it evident that though there is diversity in India but the existence of unity is dubious as can be seen in the Hindu-Muslim riots that take place every now and then, most prominent of them being the Godhra riots and the Muzaffarnagar riots, while other instances include the Ayodhya dispute and the beef ban.
Let alone religion, is there unity among the various castes that exist in India? The answer would be obvious to those who are aware of the prevailing conditions in India. Caste discrimination is apparent and still exists in various parts of India, many of the upper castes still practice untouchability and look down upon the lower castes, especially the dalits, does this kind of treatment suggest any sort of unity among these people, well, all one could notice is unity of the upper castes in demeaning the lower castes, though this kind of discrimination happens mostly in the case of economically backward lower castes while those who are wealthy and powerful and belong to a lower caste are hardly looked down upon for their caste. India has great regional diversity, every Indian state has something peculiar to it, something unique and special, culturally these states are very different from one another, they follow different customs and traditions and differ linguistically as well. Because of cultural differences people of two states find it difficult to adjust in a setting, there are disputes between them that sometimes turn into riots, many political parties take advantage of the diversity among people to create tension between them and instigate riots for their own political reasons.
India is not only rich in terms of diversity in caste,religion and region but also economic diversity. You will see a stark contrast in the conditions of the three sections of the society divided along class lines, that is, the upper class, the middle class and the lower class. People from the three categories mostly despise one another, the upper class look down upon the other two classes, the middle class dislike the upper class because they are exploited and oppressed by them while they look down upon the lower class because of their status in society, also reservation is a strong bone of contention between the middle and lower classes, the middle class believes the lower class takes away opportunities for them due to reservation, the third class which is the most disadvantaged despises the other two classes because they are humiliated by them or even if they are not they believe their interests are different from the other two classes. In fact, it is a common realization among all the three categories that their interests differ and hence they dislike one another.
Diversity exists in terms of the rural-urban-local divide as well, and discussing all spheres of diversity in India and the unity among them would be cumbersome, hence I have only cited a few examples of diversity in the country and the unity they implicate. The diversity that characterizes India gives it a unique and revered position in the world and it is indeed praiseworthy that in spite of such myriad of cultures, religions, castes and states in India it has been able to subsist as a consolidated nation with peace and harmony in comparison to many other nations and this has been facilitated by some amount of unity among the Indian people. But with such diversity unity persists only at a superficial level, hence, the need of the hour is to respect the differences we share at a deeper level and this is all that needs to make the country advanced and triumphant.