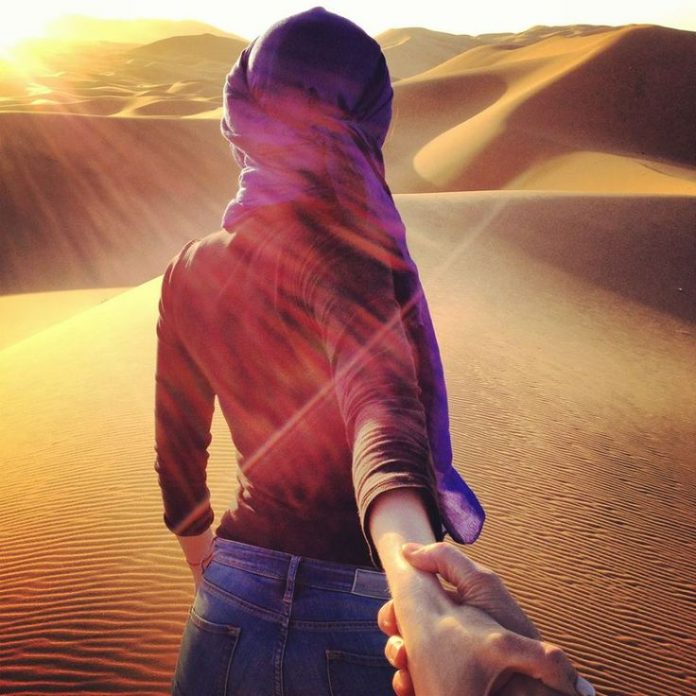 Have you ever been to Bikaner?

Set amidst the deserts of Royal Rajasthan, yet not so royal is the land of Bikaner. Stretches of the clear blue sky, fields gushing by,  mountains overlooking the rugged countryside and very few people on the roads, it is not a very famous tourist spot. However, it cannot be missed!

The rustic beauty of the place is enthralling. Rajasthan has undergone a lot of changes. It’s not the harsh desert that welcomes you anymore, it is a green landscape interspersed with bushes and thorny trees and sand. Bikaner is a colourful place like any other place in Rajasthan and yet so adeptly different. This is where I first met him. I met him at the juxtaposition of the sand and the sun along the thin boundaries of India and Pakistan. It was a small village called Raiser. The village still lies there, only that the sand has been carried away by the wind to some other dune. My story has been probably carried away by the winds too and dispersed into the clear blue sky. 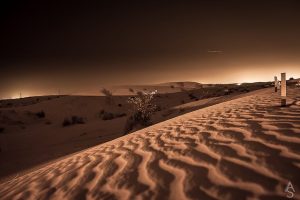 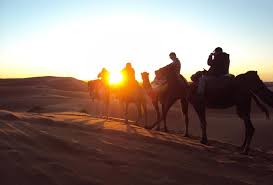 It was a beautiful afternoon. The dry winds carried the harshness as well as the cool just like a mother’s scolding. I was sitting under the babool tree reading and rereading the letters that we wrote to each other. His handwriting was coarse and cursive, like an Urdu dialect and his voice was like a song. I would read the letters every time and fall asleep as in a trance. He was a poet of the deserts. A Messiah of my heart. A time traveller. I would stare at the Surma of his eyes as he told me stories of many great men of the war and I would travel with him to the wars of his stories. The battlefield, the bloodshed, the mothers who had cried for their sons. His great-grandfather had been one of the shaheeds and he remembered about him with reverence. We used to go out on camel rides, talk to the tourists, share our stories and watch the albela dances before the campfires under the moon. 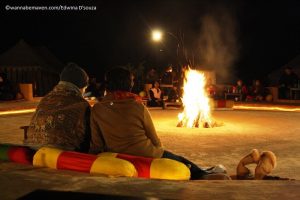 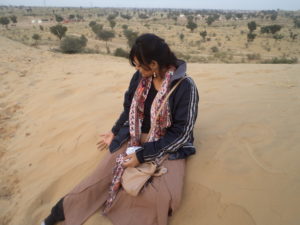 I climbed up the sand dune and looked in the direction of the village. Raiser was clear as a picture. The cold desert wind was blowing. The babool tree was still there and he was there again. His dark dreamy eyes looked into mine, and I travelled again to the starry night under the trees, in the desert sands, in the strong winds that made us sneeze, in his warm embrace in the cold nights, on his lap listening to his tales. He looked at me and tears rolled down his eyes. ” You must be missing me so much, looking at me from up there”, said he and he cried vehemently. I did not cry anymore, not after that day when I was struck down with high fever and the local medicine man held my father’s hands and said, “she is gone”.

It was a beautiful afternoon. It was almost dusk. Our shadows fell on the sand and a couple took a picture with us. The tourists said that we are going to make a great couple. I always knew that we will. As the sands of time fly by, wiping off our names from the sands, the memories of the sand and sun keep haunting us. I look into his Surma filled black eyes and read the letters every time and fall asleep as in a trance. He was a poet of the deserts. A Messiah of my heart. A time traveller. 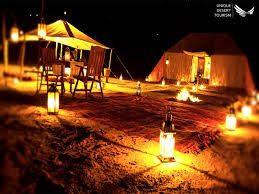