THE STRANDED AND THE STATELESS: THE ROHINGYA REFUGEE CRISIS

The plight of the Rohingya Muslims-its length and breadth,its causes, and why safeguarding their rights is an urgent issue. At Nature’s Mercy: Deprived of basic rights like food and drinking water,Rohingyas at a refugee camp try to make do with what nature has to offer. Image Source:The Star

“no one leaves home unless home is the mouth of a shark you have to understand, that no one puts their children in a boat unless the water is safer than the land”

These poignant lines by Warsan Shire, Kenyan born British poet of Somali origin,a refugee herself, are striking in expressing the angst that comes with displacement. One cannot help recall her poem when Mabia, living, if one can use the term for someone surviving in conditions as adverse as hers,in a refugee camp in Sittwe, recalls the day when her son set off in a boat for Malaysia. People are talking of leaving on the boats again, and Mabia is horrified.In her  opinion, it is too dangerous.[1]

Mabia is a Rohingya, a member of Myanmar’s brutally persecuted minority community. A look at the squalid refugee camps her people are confined to, and one isn’t surprised that so many of them have chosen to leave. Malnutrition is widespread, as are waterborne diseases. To top it off, aid groups in the region have been evicted by the Myanmar’s authorities. As a result, mortality levels among the refugees have spiked to horrifying levels.

Infancy of injustice: a child at a refugee camp in Myanmar 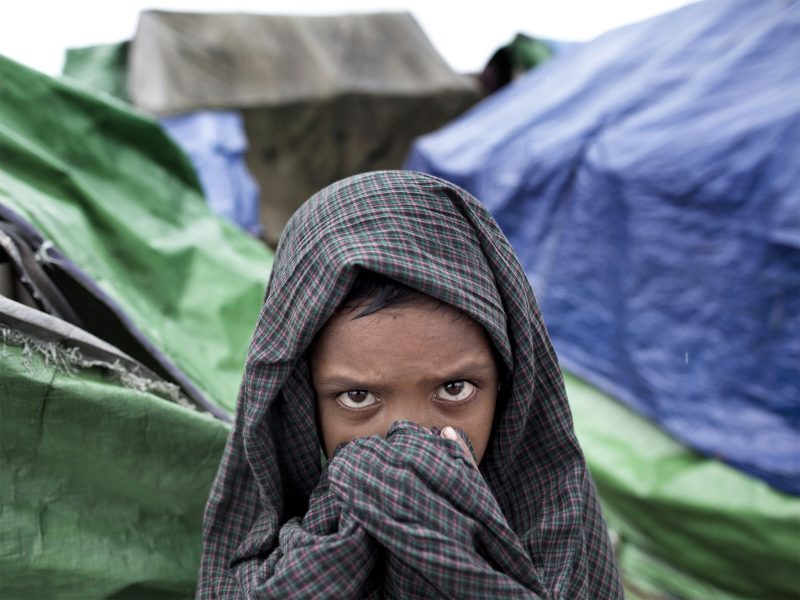 The Rohingyas hail from the Rakhine region of Myanmar, and the history of their people is a much contested one. While some trace the roots of the Rohingyas to the area now known as Bangladesh and paint them all as illegal immigrants, the Rohingyas see themselves as descendants of Muslim settlers who came to Myanmar a long time ago,mostly Persians and Arabs. Rohingyas claim their identity as distinct from Bengalis.

There is some truth in both narratives-claims of immigration may not be entirely untrue,but the complete confluence of Rohingyas with their neighbouring Bengalis is.The Rohingyas hve a cultural identity and a language unique to them-closely related,however to the Bengali one.

Indeed,the red line that appears below the word Rohingya when one types it out on Microsoft Word,pronouncing the identity to be an erroneous notion,is a reflection of the views held by many in Myanmar.

Denying their authenticity as Burmese people paves the way for systematically dehumanizing the Rohingyas,which in turn,furnishes justification for denying them basic rights and committing atrocities against them.

The history of the community’s persecution is not a recent one.The Rohingyas have been the victims of wanton discrimination and violence for decades by both the Rakhine peopleand agents of the central government.

Their supposed Bengali identity,as well as their subscription to the Islamic faith are the primary grounds of the detestment for them by the Buddhist majority Burmese population

Ironically enough, Myanmar’s transition from a military-led government to a somewhat more democratic system ushered in some of the worst violence against Muslims. According to Reuters,the national government has tacitly permitted the rise of the 969 movement, a group of Buddhist monks who employ “moral justification for a wave of anti-Muslim bloodshed.”[2] 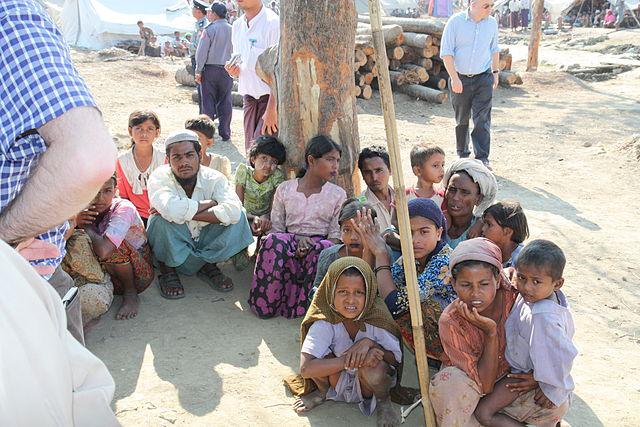 In 2012,Rakhine mobs used the incident of the rape and murder of a Rakhine woman by three Muslim men to rampage through the region, with the intention of driving away the Rohingyas.Hundreds were killed,tens of thousands forced into camps where they were deprived of access to jobs,educational institutions and medicinal aid.The number of Rohingyas fleeing Myanmar since 2012, is roughly estimated at 140,000.

The Myanmar government has carried on with its policy of erasure-after attempting to obliterate the Rohingya identity,it proceeds to erase the record of the atrocities against them.

The vehemently anti-Muslim and anti-Rohingya nature of popular opinion has been made full use of by politicians. Such discriminatory rhetoric has been spouted by nationalists in their election campaign.

Compelled to leave behind their homes,the Rohingyas have been left to the mercy of the high seas,where they have not fared well.

The “closed door” policy of neighbourhood countries have left many refugees stranded,while others have found temporary refuge in countries like Malaysia and Singapore,but their future is uncertain.

Much has been said about the Rohingyas-from the United States of America’s President Barack Obama,former Secretary of State Hillary Clinton and even The Dalai Lama condemning Myanmar’s injustice,little decisive action has been taken.

The violence against the Rohingyas is inhumane,senseless anda blatant violation of human rights. While the government of Myanmar has been grossly complicit in driving out the Rohingyas,it would not be possible if public opinion saw the Rohingyas as barely human.The Rakhine’s.resentment at the Rohingyas not voting for their political parties,for taking up jobs and economic  resources as cause of resentment this would be impossible if they did not already perceive the Rohingyas with hostility.[3] The Islamophobic and xenophobic rhetoric would not have gained impetus if the ground was not ripe for it to. The atrocities against the Rohingyas show the extent of brutality possible once aggressive nationalist ideas,particularly those largely based on religious identity,gain ground among the people of a country.

While the ethnicity of the Rohingyas has been debated,their humanity clearly can not be.The crisis is an urgent one,and one that needs members of the region to work in close cooperation to solve.While rehabilitating refugees should be a priority,necessitating pooling of economic and other resources if necessary,it is also important that Myanmar is made accountable for its actions.The international community must pressurize it into dealing with the issue seriously.

[2] Why is no one helping Myanmar’s Rohingya?