She gave a powerful performance in her last movie ‘Neerja’. She is simple and does not have any airs about her. Then why people get offended when she calls spade a spade? Want to know? Then read the following ‘Q n A’.

Q) Everyone is unanimous about her performance in ‘Neerja’! What is one memory of that movie that stayed with her? 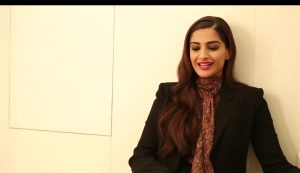 A) Sonam shares her one memory of ‘Neerja’ that stayed with her and that was the time when she came back from the shoot and she had bruises in her arms and hands, and people speculated that she is carrying an abusive relationship. Sonam was shocked to hear that and told them that it is the shooting of her movie ‘Neerja’ that got her hands bruised and also that she is single.

Q) Why people think that she cannot be a dramatic actor and can only get successful in movies that have comedy?

A) By highlighting the fact that her most successful films were comic, she tells us that having said that she does not make choices for people and validation. After ‘Khoobsurat’ and ‘Neerja’ people have started taking her seriously as they have very short span of particular perception.

Q) She being the queen of social media posts pictures which are the epitome of rich and the famous, does this demeanour obstructs people’s perception to take her as a serious performer? 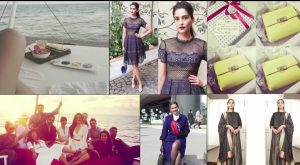 A) Not at all is her response! She thinks that not social media but it is movies that do most of the talking. And since she did serious roles as a performer, nine million people pays attention to that and not to social media.

Q) Actresses have said that when they travel to location shoots it is always the male actors who are paid more! Had Sonam ever experienced such a thing or since she is from film industry, things are not like this to her?

A) “Nothing changes for actresses no matter where they are from” she says straightforward. She says that when she does a film she makes hard choices and do not let things like pay disparity ever happen to her.

Q) Sonam said that Kangana deserves to win all the awards for ‘Tanu weds Manu’ but she won’t win because she is not attending award ceremonies! Her comments? 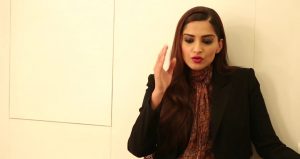 A) She laughs and tells that these are living room conversations which happens everywhere in our industry but when it comes to say it in public why then everybody sew their mouth. Everybody was agreeing with what she said and she made a difference by voicing it. She even says why people pretend to get offended by things they agree in private.