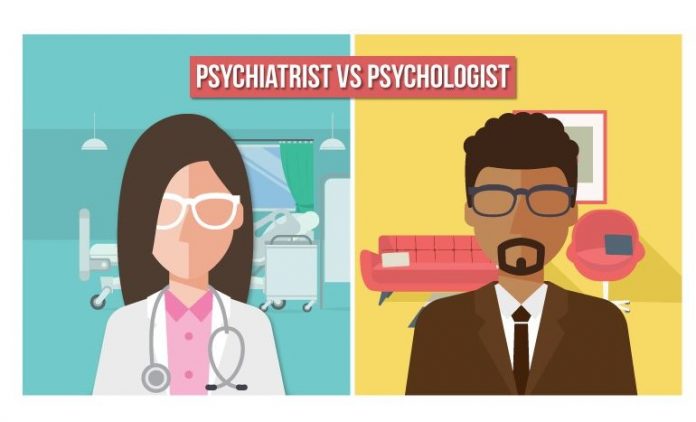 Psychologists and psychiatrists, while they sound similar, have a different roles to play in the treatment of mental illness, their job roles, and qualifications. Both professionals understand and study the brain, including feelings, thoughts, and emotions, but their roles in helping individuals vary greatly.

So if you are someone looking to build a career in this arena, or just someone curious to learn more about the world around you, you should know who they are and how they both differ.

Psychologists and Psychiatrists – Who are They?

To define precisely, Psychology is the scientific study of the human mind and behavior. Individuals who practice Psychology are known as Psychologists and study how human beings think, behave and feel in different social settings. They are experts in human behavior.

On the other hand, Psychiatry is a branch of medicine that deals with the treatment of mental illness, emotional disturbances, and abnormal behavior. Psychiatrists look at biological, neurological, and biochemical abnormalities to diagnose mental illnesses and prescribe medications to treat them.

The fields of Psychology and Psychiatry are both essential in researching and developing treatments for improving the mental and emotional well-being of people. Both share a common goal: helping people lead well-functional and healthy lives.

Differences Between Psychiatrists and Psychologists

The major differences between the two lie in many different areas, including their approaches, areas of work, and educational paths. Contrary to what most people believe, they are not the same thing. Psychiatrists, as I mentioned are medical doctors. Psychologists, while they treat mental disorders, are not restricted to it.
Here are how they differ:

1. Psychiatrists primarily deal with mental disorders. For Psychologists, it is just one branch

Psychologists are more likely to see people with conditions that can be treated/managed effectively with psychological treatments, such as behavioral problems, adjustment issues, learning difficulties, mild depression, and anxiety.

The biggest difference between the two is in the approach they take towards treating mental disorders.
A Psychiatrist Takes a medication-first approach in their treatment. Once the diagnosis is done, they build a treatment course plan for the patient, focusing on managing symptoms through the use of medications and psychotherapy. While they may also be trained in psychotherapies like psychoanalysis, cognitive behavioral therapy, and more, in a typical mental health care setting, the work of therapies is generally taken care of by Psychologists.

Psychologists primarily utilize different types of therapies to manage symptoms and help their patients cope with their life problems. They may use different forms of therapies, such as Cognitive Behavioural Therapy, Psycho-dynamic Therapy, Rational Emotive Behaviour Therapy (REBT), Gestalt Therapy, Humanistic Therapy, etc. They are also qualified in conducting psychometric tests, which evaluate a person’s mental state and personal attributes to determine the right course of action for the patient.

For example, if a person is suffering from depression and recently attempted suicide, a Psychiatrist will first prescribe anti-depressant medications to the person to manage the suicidal tendencies and make the person more open to talking and treatment. After stabilization, the psychologist would start the therapy to get to the root cause of the person’s difficulties and help them manage their negative thoughts and emotions.

Thus, psychologists and psychiatrists work together in many mental healthcare settings to help patients.

5. Psychiatrists can prescribe medicine, Psychologists can not

Psychiatrists are doctors of medicine and are legally equipped to prescribe medications to patients. Many disorders such as Schizophrenia, Bipolar Disorder, Obsessive-Compulsive Disorder (OCD), Attention Deficit Hyperactivity Disorder (ADHD), etc. respond well to medications and are primarily treated through them, even though therapy can help.

Psychologists, however, cannot prescribe such medications. They conduct psychological tests to diagnose patients and treat them through therapy. In severe cases where medication may prove effective, Psychologists refer such cases to Psychiatrists.

Both of these professionals can help those with mental health issues, and patients may first see a psychologist before being referred to a psychiatrist. Similarly, you may also be discharged from a psychiatrist if your condition is improving and then be cared for by a psychologist.

They often work together to provide the best treatments for each patient, and both have extensive knowledge in psychology. Regardless of their education and training, they are both there to support patients in managing their mental health and living a normal life despite their condition.

Both psychologists and psychiatrists are equally capable in their field to work with mental illness. No one is better than the other, they are experts in their areas of specialization and effective results are seen when both of them work together to improve an individual’s mental wellbeing.