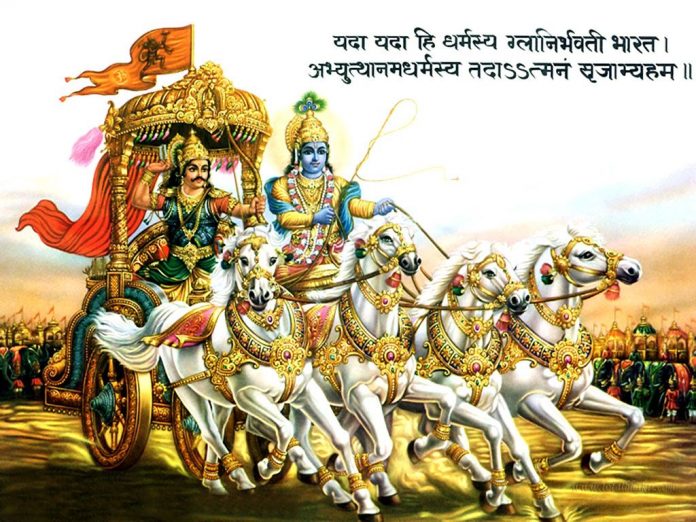 One must remain committed to duty

Lord Krishna said that one must perform his or her duty. He explained Arjun about dharma by opening his mouth and showing the entire cosmos. Krishna told Arjun that dharma is rigid as well as flexible. He said that dharma is not just an institutional religion. Dharma is our duty and is of ethical nature. We are born with dharma and have to perform our duties in every situation. Dharma holds the universe together. Krishna told Arjun to be dutiful in challenging times. At the beginning of war between Pandavas and Kauravas, Arjun was hesitating to participate in the war. Then Krishna explained him about how a person should remain committed to duty.

Duryodhan’s desire for the throne of Hastinapur led him to adharma. His greed for becoming the king made him choose wrong methods. Duryodhan did not think of what is right. He was always proud of his father and brothers. He was proud of his father being the king of Hastinapur. That’s why he felt he can do whatever he wants. But blind pride and wrong actions led to his destruction. One must be careful about actions and thoughts.

Kindness is a great virtue

Karna was known as Danveer due to his kindness and generosity. He used to help everyone and give more than expectation. Karna was the son of Sun God. He had a natural armour that acted like a shield and protected him. Karna parted with this when Indra came disguised as an ascetic and begged for alms. Indra was moved by Karna’s selfless act and gave his vajra. We must be kind to people, animals and birds.

Revenge does not give positive results

Shakuni wanted to take revenge from Hastinapur as he was unhappy with his sister Gandhari’s marriage to Dhritarashtra. He poisoned the minds of Dhritarashtra, Duryodhan and Dushashan. Shakuni wanted Gandhari to be queen, so he instigated Dhritarashtra to become king. He filled Duryodhan with these thoughts from his childhood. Shakuni caused hatred of Kauravas towards Pandavas. His resolution of taking revenge destroyed the Kuru clan. Shakuni’s revenge consumed a civilization and even he died. Revenge is harmful in the long run.

Half knowledge can be dangerous

Abhimanyu had half knowledge of Chakravyuh. During the war of Pandavas against Kauravas, he informed this to others. Still Abhimanyu bravely entered the Chakravyuh created by Kauravas. Chakravyuh was made by Drona, Kripacharya, Ashwathama, Karna, Duryodhan, Dushashan and Shakuni. Abhimanyu was helpless and could not return back. He could not break out of it and these seven people killed him. His half knowledge caused his death.

Also read: Ramayan – What the epic teaches us

Focus can help in achieving goals

Arjun was always focused and dedicated to his goals. This made him a winner in all the wars. He was famous among all people for his success in archery. Everyone respected and praised him. Arjun was the greatest archer. We must be focused on our goals and strive to achieve them.

Righteousness must have planning

Yudhishtir was known as Dharmaraj. He was a righteous soul. Yudhishtir was the most mature and kind among the Pandavas. He had great virtues which everybody appreciated. But he could not understand the reason of gamble game. Yudhishtir did not object to Shakuni and Duryodhan. As a result, he lost everything. He lost his wealth, kingdom, brothers and wife. Yudhishtir did not have foresight and planning. In today’s world, one needs to have righteousness along with proper planning. Otherwise it is difficult to survive in this mean world.

One should not be blinded by love

Dhritarashtra loved his children blindly. That’s why he never noticed the faults of his son. Dhritarashtra never reprimanded them in spite of seeing their wrong actions. Duryodhan was the apple of his eyes. Correcting our loved ones does not decrease our love towards them. Rather it prevents them from committing mistakes and becoming a good person. Dhritarashtra should have corrected Duryodhan and his brothers. This could have saved their lives and the destruction of Kuru clan.

Righteousness is more important than any other thing. It cannot be ignored because of love. Gandhari was the mother of hundred sons. She had noticed the faults of Kauravas. Gandhari was a great lady who always favoured dharma. That’s why she was not in favour of her sons. Before the battle of Kauravas and Pandavas, Gandhari refused to bless her own sons. It was because she knew that her sons were on the wrong path.

We should think before speaking

We must always think and then speak something. Draupadi taunted Karna about his caste during her swayamvar. She had mocked Duryodhan when he had gone to Indraprasth. By her words, she had insulted Dhritarashtra. This angered Duryodhan and he thought of taking revenge on Pandavas. Draupadi’s words indirectly led to the battle between Kauravas and Pandavas. We should know what to speak and when to speak.

Shakuni poisoned the minds of Dhritarashtra and his sons. He instigated Duryodhan to think of his Pandava brothers as enemies. Shakuni destroyed whatever Kauravas owned. He was responsible for the battle between Kauravas and Pandavas. Shakuni’s presence in Hastinapur led to the destruction of Kuru clan. Stay away from bad company.

Fight for what belongs to you

Everyone in Hastinapur, including the great Bhishma knew that Yudhishtir deserved to be the king. But the circumstances were such that Pandavas had to fight for their rights. Pandavas had received unfair treatment in Hastinapur from their childhood. But that did not stop them from fighting for what belonged to them. Pandavas and Draupadi struggled a lot but finally succeeded in getting the throne. Fight for what you deserve.

Strategy is essential for success. It is always good to plan everything even if plan fails. Lord Krishna had his master plan for the battle between Pandavas and Kauravas. Pandavas could win the battle due to the strategy of Lord Krishna. They believed him and followed all of his instructions.