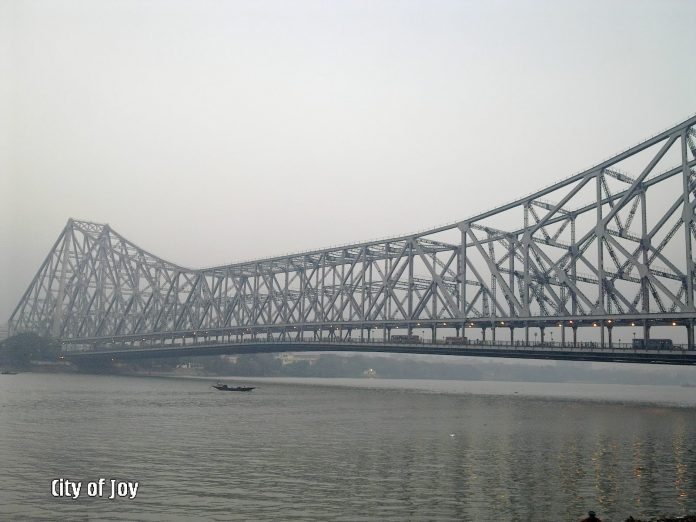 He along with his group of retired ‘buros’ used to light up the Beniatola Lane area near College Street at dusk. Most of the time they compared the locality’s shundori boudis with the ruposhees of their time, when they were teenagers with sparkling eyes like the jubilant sun. Mukkujjeh mawshai, unlike Mitro babu preffered the  ruposhees over 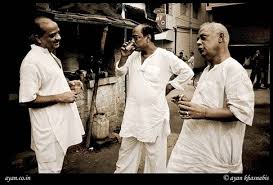 shundori boudi. He said,” Women during our time were oporupa with charm in everything. The way they talked, walked or ignored other guys had a different elegance. Women nowadays have lost that and just know how to fly off with fashion and torn dresses.” Not only were the addas around ladies but they also talked about their beloved city. How fast it is changing and how deeply they regret it.

You must be wondering how I got to know so much. Nah, I am not a resident of Kolkata. I just went there for a fortnight with my mother to spend my holidays at my maashis dida’s place. For quite long I wanted to go down there for I had heard so much about it. Big roads, tall buildings flanking the city, in particular of two things-The Howrah Bridge and The Victoria Memorial. My mother had promised me for long that we would go. So, after my annuals we came down to Kolkata. Mama had conveyed earlier that he wouldn’t be able to receive us at the Howrah station. Some important work had befallen. Nevermind, he gave us orders, on which bus to catch and where to get down. We arrived at Howrah a bit later than the scheduled time. By the orders we boarded a green colored Ac bus, as it was summer. Well! It was the last one in the row of the standing buses. And little did we know that we still had to wait for 20 more minutes to begin the final phase of our journey. Inside, the chilled air of the conditioner didn’t even give a hint about the scotching heat outside. Through the windows I could see people gulping down water bottles in one breath. Some were vomiting, others pouring water over their heads. All of this made me a bit uncomfortable. Sitting static in a bus for 20 minutes with no movement whatsoever and watching the same thing outside through the window made me uncomfortable and angry.

Now, if a native of Kolkata happens to read the above few lines, about how I was getting pissed. He or she would definitely laugh out his stomach at me. I could say this cause when our bus finally began to move and a faint hope lingered around me that now in no time we’ll be at mashis dida’s place, I realized how wrong I was. And how foolish it was to get pissed in only twenty minutes when you have the luxury of enormous jams around the Mg Road area and lot of time to think about how much anger should you spend. 2%? 10%? Cause you don’t know when will you be moving next. Cause all the time, you’ll feel you are where you begun. 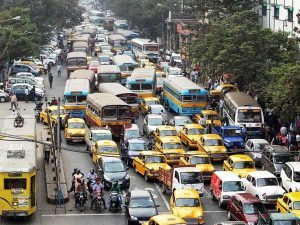 Well, this was my first experience of Kolkata. What fun will you feel when for most of the time, you have to watch the same shops and the bus doesn’t move. Absolute disaster! Finally by the grace of God, we did beat the jam and reached maashis dida’s place. Later, I learned that without the jam it takes nearly half an hour to reach. But it took us an hour and an half. Well, my mind then, just thanked Kolkata for such a wonderful first time greeting.

It was at my maashis dida’s place in around College street where I stayed for a fortnights and eventually came to know Mitro babu and his gang, overhearing their delightful conversations.. But the thing that got me interested the most was their conversations were about Kolkata. One evening I asked Chatterjee dadu whether jams used to happen when they were kids. He said that they never happened in such a scale. Then, streets never hosted so many cars or buses. Buses existed, but few, and most of the buses were double decker. But the main means of transportation were the trams. Yes, I had seen one that evening. It was going straight through the college street. I had also seen tram lines on the middle of the road. But that evening was the first time I saw only a single tram carrying only 4 to 5 passengers. But no double decker bus caught my eyes.

I was amazed to hear from them that unlike what I saw in Kolkata , so many tall buildings galloping the city didn’t exist then. At some places big fields existed, were they would go about playing in the evenings after school. All of that green had turned into concrete jungles in front of their eyes, which they could never take to their heart. One of the members of the gang- Saha da, as the others would call him, was very critical and hated one of the things that the city had inherited in recent years from the core of his heart- Malls. He said,” The worst thing about this Kolkata are the malls. I never understand what’s wrong with markets like the ones in borobazaar and gariahat. I mean during our days they never existed. So does that mean that we didn’t shop in pujo or never got excited about going out with our family. It destroys our Bangali Culture. Nowadays I rarely see anyone going to borobazar with his family to buy clothes. All rush to malls. Everything now is a ‘nyekamo’. Don’t know what’s wrong with the city.” 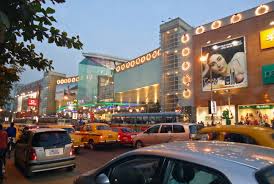 I smiled a bit at the way he justified his disgust but I did realize that he had a point. I had been to both malls and market places in Kolkata. But truly I felt a different kind of vibe around the market places. People walking together in the same direction, some hawkers on the footpath selling china cups and dishes, few advertising their products with the battle of vociferousness. Bigger shops having that impenetrable crowd and people pleading on shopkeepers to show them what they want, first. So that they could boogie from the excessive force all around them or just so that they could steal kisses from chicken and mutton rolls either at bedwin or run behind biriyani at Aaminia. Well, malls do have everything together under one roof, but you won’t find the life soaking thrill in open air that borabazar, goriahat or esplanade. So, I realized that Saha dadu did have a point and I did agree with him. Well, I found only one place quite similar to what they had described it as back in their childhood.

The Esplanade region was the only place in Kolkata that had the luxury of fields and buildings. Buildings being basically British made -majestic and beautiful. Unlike the ones in and around the Exide crossing that strike an impecceable fear of sudden collapse. That day after visiting The Victoria Memorial we sat at the Maidan overlooking the sunset. Boy what a view it was! The gang had told me the earlier day that they wouldn’t give up such a beautiful view for ‘crores’ as cash. True they were. I also would never. We retired from there walking, passed the fields around Eden Gardens with vehicles moving swiftly across the Red Road. The fortnight that I had spent in Kolkata with my family and with Mitro babu and company, helped me see so many sides to the city. So many things they said about their Calcutta and I found so little in common with Kolkata. It would break my heart. I realized no matter how much I want to see the Calcutta they had seen, the Calcutta that they talked about, it just was never possible. 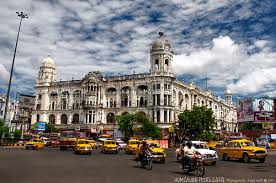 Its 7:16 now and I am sitting back in home with my travel journal. Well, if someone asks me weather I enjoyed my holidays, I’d say,” Sure as hell!” But if someone asked me whether I enjoyed Kolkata or not? I’d rather be in a dilemma. You see, the city is definitely  joy. Its pumped up and happy, roaring about with its traffic from day to night. But I did hear from people who were born and brought up there that their city has changed. The things that existed then, were better than the things that exist now. It is from their stories that I have learned about so many changes here and there. And frankly in one corner of my heart I believe that Calcutta is better than Kolkata. Maybe I am wrong. But it is  something I felt from heart after my visit. So, no, I didn’t enjoy Kolkata that much. Maybe, not through my living eyes but through their living stories. But yeah, I sure as hell would want go visit Calcutta some day. Maybe someone out there would lend me their time machine, will they?