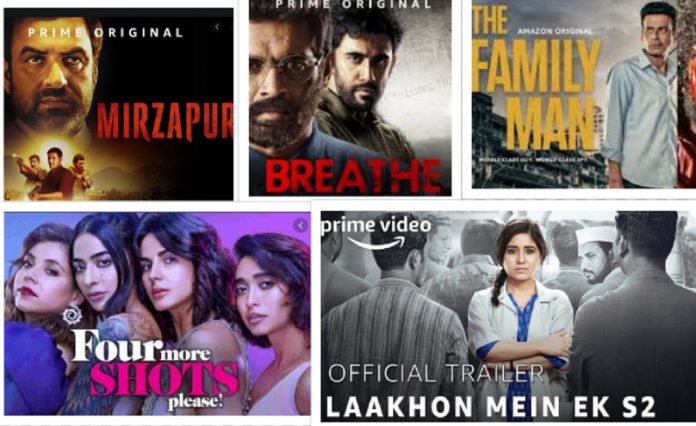 These days OTT platforms are getting more popularity than traditional entertainment ways. Even it is more entertaining than the tv series that is never ended. Amazon, Netflix, and Hotstar are very much popular. People binge these a lot during lockdown time. Even now when every work is getting back to normal like daily soaps shooting has been started, still people’s best choice is these OTT platforms especially Amazon Prime and Netflix.

A lot of people would rather spend hours or even days with the same characters in a TV series, and Amazon has one for every mood Amazon has come up with so many things to watch out. Amazon Prime Hindi series are good to go. It offers every sort of movie-like drama, romance, thrill, suspense, and crime. Are you in the mood for watching something on Amazon Prime? So today I’ve come up with the top 10 Hindi amazon prime to watch in 2020.

Inside Edge is a very entertaining web series starring Vivek Oberoi and  Richa Chadha. It is based on cricket and depicted politics in cricket. Vivek Oberoi and Rich Chadha performed outstanding performances in this series. It is directed by Aakash Bhatia and produced by Ritesh Sidhwani & Farhan Akhtar. The series is having 10 episodes.

Made in Heaven–Amazon Prime Hindi series

Made in heaven based on the story backdrop of big fat Indian weddings. Subhita Dhulipala and Arjun Mathur are in main leads. The story highlights some complex issues in the life of two main leads.

The story revolves around two wedding planners, Tara and Kara who are living in Delhi. They run their own agency named “Made in Heaven”. In this series, Martial affairs and LGBTQ issues in the country are also depicted. Made in Heaven has a total of 9 episodes. It is directed by Zoya Akhtar.

This series revolves around the circumstances of family man Manoj Bajpayee. You can spend time watching this series without any boredom.Srikant(Manoj Bajpayee )suffers through major problems in his family being a government employee. It is a drama and action-based series directed by Raj and DK.

This show is based on the day to day problems faced by middle-class Indians to get indulge in Engineering or Medical field. Shweta Tripathi plays the lead. This show pushes the young audience to come out of their comfort zone and face the reality of the world. It is written by Biswa Rath Kalyan.

Mirzapur season 1 has done remarkable performance, so by its season 2 is launched in 2020 again. This series was based on drugs, mafia, and violence. Actor Ali Faisal plays the main lead. It is a crime, action, and thriller based series.

This story is based on the true story of Indians soldiers who put all their efforts to free their country. Main leads of this series are Sunny Kaushal, M.K. Raina, and Sharvari Wagh. The credit of this series goes to Kabir khan who put his all efforts to make it good.

This story revolves around the life of four ladies that are so fearless. The main leads of this series are Bani J, Manvi Gagroo, Kirti Kulkarni, and Sayani Gupta. It is compiled by Rangita Pritish Nandy and directed by Anu Menon. In this series, the problem faced by modern Indian women is depicted. The entire season is based on sensual scenes which sometimes feel ridiculous to watch.

Breathe is based on crime and drama. The main leads of this series are R.Madhavan and Amit Sadh and it is built under the direction of Mayank Sharma. This story shows the pain of the father who trying hard to save his son’s life. It emphasizes the society who is money-driven and for that money is a priority besides a patient’s life.

Bandish bandits are the most entertaining web series, based on romance and music. This is written by Amritpal Singh Bindra. This story moves between the clashes of pop music and Hindustani classical music. The main leads in the series are Ritwik Bhowmik and Shreya Chaudhary. Sheeba Chadha also plays a significant role. Shankar Ehsan Loy has also made their digital debut via this series.

Mumbai diaries-26/11 directed by Nikhil Advani. Mohit Raina, Tina Desai, and Konkana Sen are in main leads. According to the reports, there is a fictionalized look of the Cama & Albless Hospital staff for keeping patients secure from the terrorists, who killed several people and many people are injured.

Amazon Prime has so many things to binge out. In this blog, I have listed the top 10 Amazon Prime to binge watch in 2020. I hope you’ve enjoyed this blog. Amazon Prime regularly launches new web series. On the other hand, the audience loves to watch these series. It’s so great to see these new concepts able to seek the audience’s attention. So don’t forget to watch these Hindi web series 2020 exclusively on Amazon Prime. And watch out for this space as we will keep you updated with fresh content.