Food To Eat When You Are In Thailand

Some of us are already quite familiar with Thai food. It is both nutritious and tasty. But if you are visiting Thailand and do not try these few heavenly cuisines then you will be missing a lot! The distinction of the taste we get when India prepares Thai food and when we eat Thai food in Thailand is huge. If you did not like Thai Food in India then don’t lose hope just yet. Wait till you try these dishes there.

Khao Pad Rice (Also known as Thai Fried Rice) :  It is a variety of fried rice typical of central Thai cuisine. In Thai, khao means “rice” and phat means “of or relating to being stir-fried”. This dish differs from Chinese fried rice in that it is prepared with Thai jasmine rice instead of regular long-grain rice. It normally contains meat (chicken, shrimp, and crab are all common), egg,onions, garlic and sometimes tomatoes. The seasonings, which may include soy sauce, sugar, salt, possibly some chili sauce, and the ubiquitous Nam Pla or Fish Sauce (I won’t suggest you this one), are stir-fried together with the other ingredients. The dish is then plated and served with accompaniments like cucumber slices, tomato slices, lime and sprigs of green onion and coriander. This dish has many regional variants, as it is ubiquitous. Slightly brownish in color it does not taste anything like normal Chinese Fried Rice but only better than that.

Some of the common variants are : 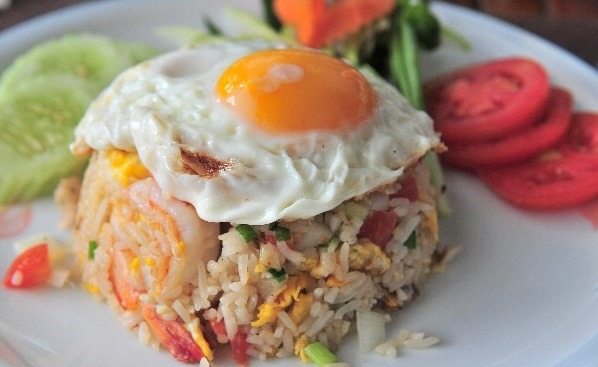 Pad Thai (Rice) Noddles : It is a stir-fried rice noodle dish commonly served as a street food and at casual local eateries in Thailand. It is made with soaked dried rice noodles, which are stir-fried with eggs and chopped firm tofu, and flavored with tamarind pulp, Nam Pla or Fish Sauce (And again, I do not suggest you to take it), dried shrimp, garlic or shallots, red chili pepper and palm sugar, and served with lime wedges and often chopped roast peanuts. It may also contain other vegetables like bean sprouts, garlic chives, coriander leaves, pickled radishes or turnips (Hua Chaipo), and raw banana flowers. It may also contain fresh shrimp, crab, squid, chicken or other proteins. Vegetarian versions may substitute soy sauce for the fish sauce and omit the shrimp. 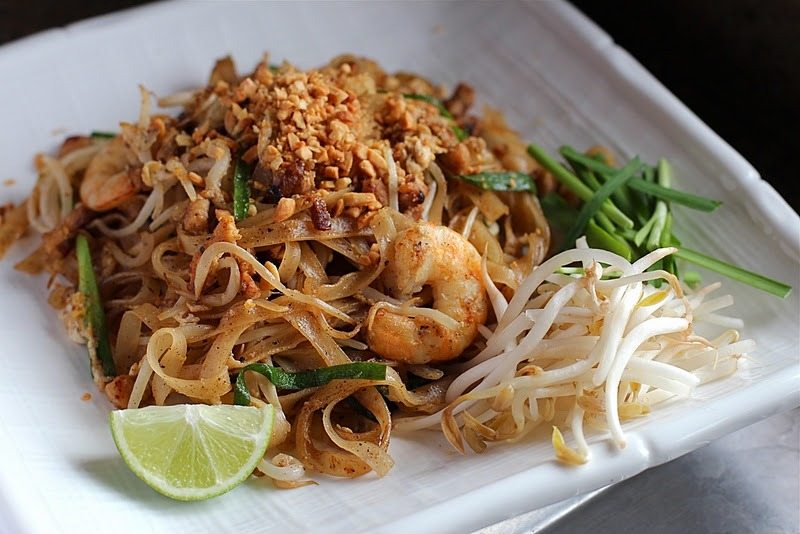 Tom Yum : It is a Thai soup, usually cooked with shrimp. Tom yum is widely served in neighbouring countries such as Cambodia, Brunei, Malaysia and Singapore, and has been popularised around the world. Tom yum originated in Laos and Thailand. Since the time of its origin, this soup is popular in Thai cuisine.

Literally, the words “tom yam” are derived from two Thai words: “tom” and “yam”. “Tom” refers to boiling process, while “yam” refers to a Thai spicy and sour salad. Indeed, tom yum is characterised by its distinct hot and sour flavours, with fragrant spices and herbs generously used in the broth. The basic broth is made of stock and fresh ingredients such as lemongrass, kaffir lime leaves, galangal, lime juice, Nam Pla or Fish Sauce (Tell them to prepare it without it), and crushed chili peppers.

Commercial tom yum paste is made by crushing all the herb ingredients and stir frying in oil. Seasoning and other preservative ingredients are then added. The paste is bottled or packaged and sold around the world. Tom yum flavored with the paste may have different characteristics from that made with fresh herb ingredients. The soup often includes meats such as chicken, beef, pork, or shrimp. Just like Khao Pad this also has many variants. Sometimes it is also served with Plain Rice. 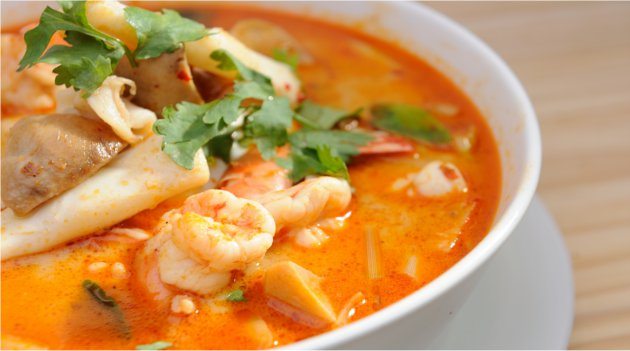 Green Curry (Literally, Sweet Green Curry) : It is a Central Thai variety of curry. The name “green” curry derives from the color of the dish, which comes from green chillies. The “sweet” in the Thai name (Wan means “sweet”) refers to the particular color green itself and not to the taste of the curry. As this is a Thai curry based on coconut milk and fresh green chillies, the color comes out creamy mild green or, as this color is called in Thai, “sweet green”. Its ingredients are not exactly fixed. The curry is not necessarily sweeter than other Thai curries but, although the spiciness varies, it tends to be more pungent than the milder red curries.

Apart from a main protein, traditionally fish, meat, or fish balls, the other ingredients for the dish consist of coconut milk, green curry paste, palm sugar, Fish Sauce (Tell them to take this away from your table). Thai eggplant (aubergine), pea aubergine, or other vegetables and even fruit are often included. The consistency of its sauce varies with the amount of coconut milk used. Green curry paste is traditionally made by pounding in a mortar green chillies, shallots, garlic, galangal, lemongrass, kaffir lime peel, coriander root, red turmeric, roasted cilantro (coriander) and cumin seeds, white peppercorns, shrimp paste and salt.

The paste is fried in split coconut cream until the oil is expressed to release the aromas in the paste. Once the curry paste is cooked, more coconut milk and the remaining ingredients are added along with a pinch of palm sugar and fish sauce. Finally, as garnishes, Thai basil, fresh kaffir lime leaves, sliced Phrik Chi Fa (“sky-pointing chilies”, large mild chilies) are often used. For a more robust green curry, such as with seafood, julienned krachai (fingerroot/wild ginger/Chinese keys), white turmeric, and holy basil can be used as garnishes.

Green curry is typically eaten with rice as part of a wider range of dishes in a meal, or with round rice noodles known as Khanom Chin as a single dish.

If you do not prefer spicy or strong flavored food then this will be your favorite. It tastes very different from the normal Indian Green Curry. 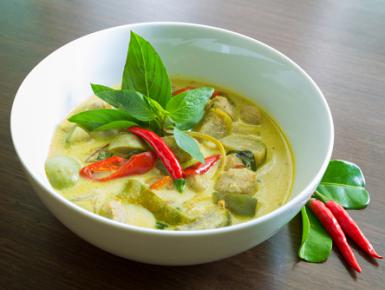 Coconut Ice Cream : Now this is familiar to a lot of us but an authentic Thai coconut ice cream tastes very different. You can get absorbed in its rich flavor. You’ll be enriched with the taste of fresh coconuts with every bite. Authentic Thai Coconut Ice Cream is served inside the coconut itself wrapped up in the white pulp sometimes topped with crushed peanuts. I would suggest you to have street-side coconut ice cream. Usually they give you freshest coconuts. You can get them in any other restaurants as well. There is no special difference between a street-side coconut ice cream and a 5 star one but I personally think the authenticity is lost. If you are visiting Bangkok, you can get them at the floating market for just 60 bahts! They’ll give you around 3 scoops which would be difficult for you to finish alone unless you love ice creams, of course. (Yes, I was able to finish it alone *High Five*) 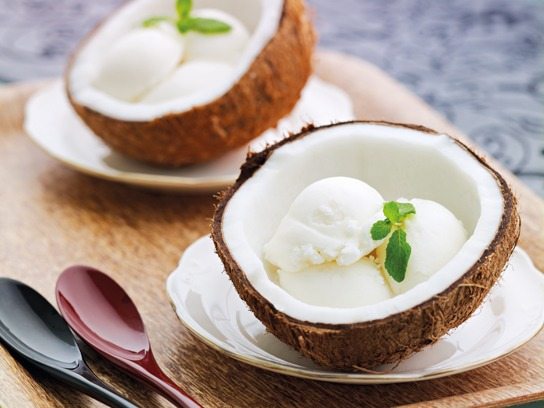 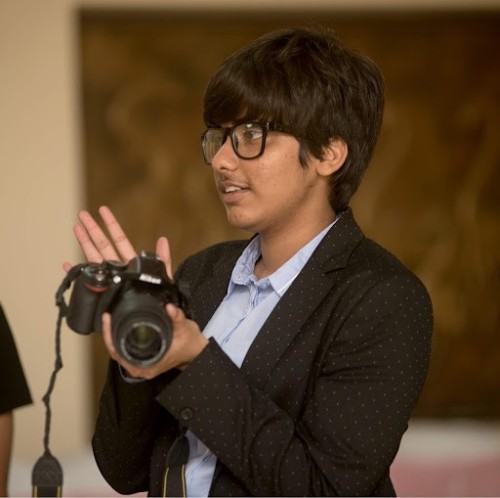 Sammi Stark
The world is beautiful. People often fail to realize it since they are so busy seeking respect and money. I would like to show everyone there are two sides of a coin. I chose writing, photography and sketching to make a difference. I'm also an enthusiast for music. I've an avid interest in travelling and would like to make a career out of it.