Someone once said “Everyone is a genius”. I agree but if we will judge a fish by its ability to climb a tree, it would start believing that it is stupid. This is also not enough, these days schools make them climb down, run on fields, make them fly and they make them do everything except for swimming. A school is believed to be a pilgrimage but are they still so ? Turning thousands of kids into robots, are they still a place to learn? Do they realize how many students relate to that fish, who wants to swim but are unnecessarily forced to climb trees up and down. 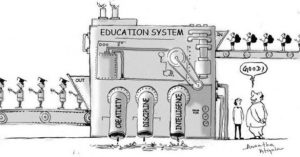 Every student is provided with a gift, a separate, a unique gift. But schools are the places where these gifts in them are killed, they are forced to think that they are stupid, believe that they are worthless. Well the time has come, no more excuses, I, on behalf of every student who is still wasting his time becoming a robot, accuse schools of killing creativity, individuality and at the end, the student.

Everything that we used in past is now completely modernized; be it the mobile phones, cars, houses and every thing that we look around except for that one thing “CLASSROOM”. Now ain’t that a shame? In literally more than a century nothing has changed. Yet these schools claim to prepare students for future. I want to ask them that seriously, are they preparing students for the future or for the past?

Students in schools are trained to work in factories which clearly explains why students are put in straight rows, nice and neat, they ask them to sit still, raise their hand if they want to speak, give them 15 minutes to eat, teaching them to compete and shockingly telling them even what to think and all this just to get a grade ‘A’. Yes grade ‘A’, a letter which determines quality product manufactured from the factory called “School”. 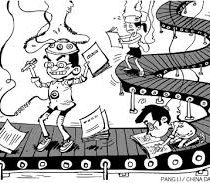 Today we don’t need to make robot zombies. The world has progressed and now we need people who think creatively, independently, innovatively and critically. Scientists have confirmed that no two brains are the same. Then why are the teachings same for every student, the same way, giving this ‘one size fits all’ kind of crap. Taking an example: If a doctor would prescribe every patient the same medicine then the result is going to be tragic. When it comes to school this is exactly what happens; this “Educational Malpractice”, where a teacher stands in front of 20 students, each having different gifts, different needs, different strengths but are taught the same thing, the same way. Isn’t it horrific?

Now let’s be honest, a teacher has the most important job on the planet but still they are under paid. Well I believe that teachers should earn as much as doctors because if a doctor can cure the heart of that student, a teacher can reach out to that heart and can teach him to truly live. Teachers are often blamed but that is not a problem for many because they seem to work in a system without many options or rights. Curriculum is created by policy makers, many of them haven’t even taught even a single day in their entire life. 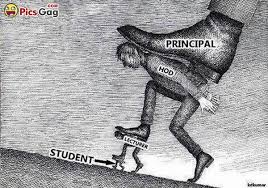 When we are customizing cars, mobile phones, houses and everything around us then it is our duty to do the same for education; to upgrade it, to change it. Sure mathematics is important but not more than art or dance. Let’s give every gift an equal chance. I know this sounds like a dream but countries like Singapore and Finland are doing impressive things. They have shorter school days, teachers make a decent wage. They focus on collaboration instead of competition. There is no single solution but let’s get moving because while students are the 20% of our population, they are definitely 100% of our future. So let’s attend to their dreams and then there is no telling on what we can achieve. Do away with school spirit because that’s useless unless we’re working to bring the spirit out of each and every student; that should be our task. No more common core, instead let’s reach the core of every heart in every class.

“This is the world in which I believe, a world where fish, are no longer forced to climb trees.” 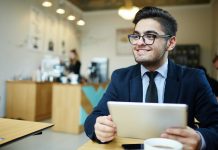