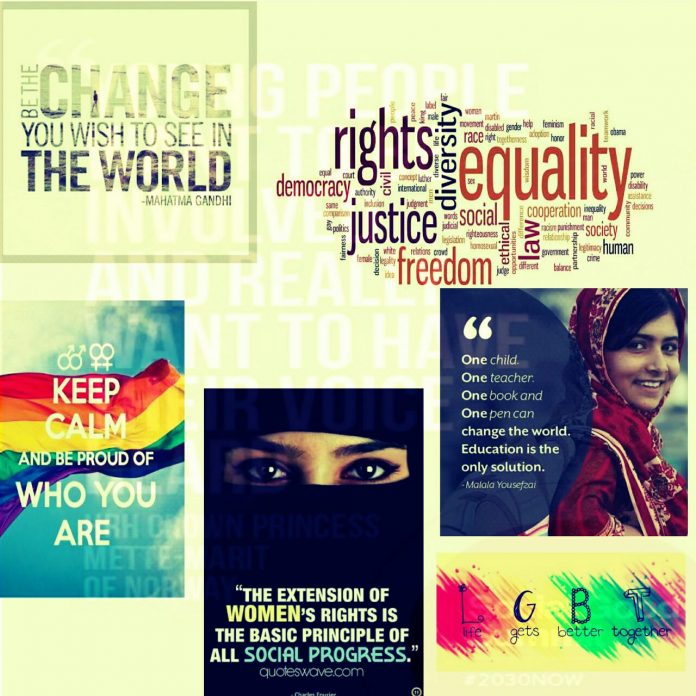 Discrimination, a very controversial and widely discussed, debated and disputed topic, is very rigidly embedded in the everyday lives of people both common and extraordinary. If I set to pen down the discrimination faced by people in this world, there will be an endless list of such instances and can discrimination be limited to humans, is every creature on earth not a victim of discrimination in one way or the other. The answer is very apparent if one closely observes the world around them. However, it is best to refrain from discussing discrimination around the world and limiting it to India otherwise the list would be ceaseless.

Enter a classroom of a government school in rural India,what do you see? Kids sitting in groups but do you know the basis on which these groups are constituted,well,they are formed on the basis of wealth,class,status,gender and most importantly and evidently caste and religion. The teacher enters the class,the class greets the teacher but the teacher greets the frontbenchers,the economically,socially and politically superior class,the so-called privileged ones,while the poor,the downtrodden,the socially backward classes are outrightly ignored by the teacher,the teacher not only ignores them but pushes them to occupy the back seats in the class,they are demeaned by the teacher and other students,they are showered with the lowest grades no matter how wonderful their assignment would be. Blatant discrimination on the basis of caste and religion can be seen in the distribution of Mid Day meals in schools in India,where in the upper caste are provided Mid Day meals more regularly and adequately as opposed to their disadvantaged counterparts.

Another kind of discrimination very evident in schools is gender discrimination. At an early age boys and girls are introduced to the notion that there are separate toys,colours, dresses, rules and codes of conduct for them,they are taught there are differences between them besides the biological ones and this becomes the root of gender discrimination. Gender is a social construct where in the impressionable minds of children get captured and this strengthens the gender disparities and discrimination in society. This scenario of rampant discrimination is not limited to rural schools but is also prevalent in urban schools,even the private and reputed ones. School is a place where children learn to discriminate not only between the good and bad but also among themselves many times,but family plays an even greater role in this context.
An infant’s first interactions are usually with family members. Families instill social values,morals and lay down principles for the child who functions within this framework and learns to act and behave in accordance with the norms of the family,thereby acquiring the beliefs and notions of the family. Discrimination starts right from the conception of the child,the mother is under constant pressure to give birth to a male child as if she is responsible for deciding whether the child would be a male or female,families go to the extent of opting for sex-determination by way of sonography which is illegal in India and if they find out there’s a female in the mother’s womb they would kill her,or kill both the mother and the child,female infanticide is still prevalent in many parts of India.

If the girl is “allowed” to be born or to live,here “allowed” signifies authority of the patriarchal society that permits the girl’s survival,she faces no less discrimination than she had faced in her mother’s womb,there are a plethora of rules and regulations laid down for her since childhood,she is not allowed to wear clothes of her choice,she is not allowed to go out to play or even if she is then she is supposed to come back early,she is not supposed to argue with her brothers or any member of the family,she is supposed to keep her voice low and interaction with a member of the opposite sex is strictly prohibited for her. Some families believe girls don’t need education or employment and hence girls don’t receive education and are not allowed to work,though a girl doesn’t need to be “allowed” to work because right to education and employment are basic human rights.

Girls are also not supposed to choose a partner of their choice and work after marriage in many societies. Hence many girls face discrimination throughout their lives,the ones who are disadvantaged to be born in a family that doesn’t value a girl as a human entity. Families instill the idea in males and females that males are supposed to be authoritative,strong and the breadwinner of the family while females are to be meek and submissive,their only important roles in life being that of the wife,mother and homemaker.
The family is not only the source of gender discrimination but also class, caste, and religious discrimination. As the child grows up in the family, the family teaches him/her not to interact with a specific group of people such as the lower caste, the poor or people belonging to the minority community,they are introduced to the concept of untouchability when they see their family members practicing it with the sweeper or washroom cleaner who usually belong to lower castes. When kids go to school their parents teach them not to interact with children of a lower socioeconomic status than them, families keep a whole separate set of utensils for guests of a different class, caste, religion this gives children the idea that they are different from others, they are superior or inferior. Many families teach their kids that their’s is the only true religion that needs to be followed and respected, this creates feelings of dislike towards other religions in children that rapidly develops into discrimination. Hence, the school and family should be made aware of how they are contributing to discrimination in India in all spheres and must be encouraged to abandon such discriminatory practices.
Because of the glaring instances of discrimination we are exposed to in our families and schools, the idea to discriminate becomes embedded in many of us and so we discriminate at an individual level. A minister’s son is giving a pass when he breaks a rule while an ordinary person’s son would be punished for the same, while sitting in a metro haven’t you seen people getting up from their seats or worse still not letting the other person sit next to them just because the person seems to be economically disadvantaged. At your own college and class haven’t you seen people being discriminated against as they are from an economically and/or socially backward family or place, have you not seen people using words that signify a caste or place as derogatory terms, hence discrimination on the part of the individual manifests in diverse forms, there is a long list of the types of discrimination that exist in India and worldwide, I’ve just mentioned a few, there is absolutely no domain that is free from discrimination, not even public places, not even holy places like temples, mosques and the church, where there are many restrictions and rules regarding the entry of women and backward classes.

Thereby, discrimination is like a hydra-headed demon that has posed a great challenge to peaceful co-existence in India, it has plagued India over centuries and the need of the hour is to overcome it by all means so as to ensure the progress of the country in all facets whether economic, social or political.