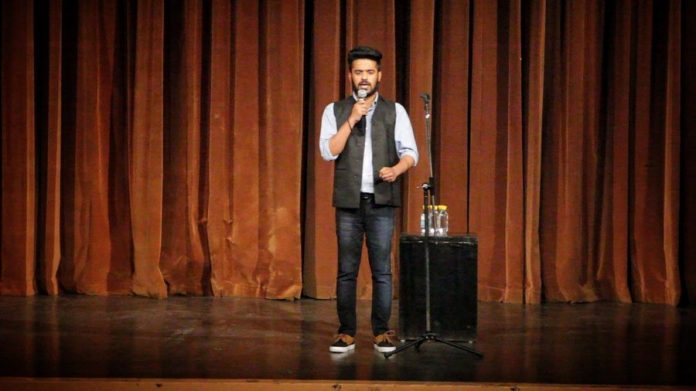 Approximately around 2 percent of the world’s population is suffering from stuttering at present. For this 2 percent people, living a simple social situations can be a mortifying experience. There’s always a constant worry of being called on in a gathering or dismay of speaking in public and also persistent bullying that comes with being a kid with a speech snag.
Stuttering is basically a speech disorder caused by the instinctive repetition of certain words and may be caused by child development, human physiology, genetics etc., and further leads to mental stress, depression, etc.

Many people in India are affected from stuttering. But instead of bullying we must be friends with them.

One of them is Vaibhav Arora, who was born with a tongue tie, in which a thin layer of his skin is attached under the tongue. Due to this effect, he started stuttering. The problem didn’t stop here. Being a stutterer, Vaibhav used to stammer also.

Vaibhav was unaware with the fact that he had both the problems of stammering as well as stuttering. When he was in sixth standard, he realised that he is suffering from both. Before realising he thought that he is just a stutterer. As a child he was bullied and made fun of and used to stay alone and as a consequence, he didn’t have many friends. He used to be afraid to go out and play, having a fear of getting bullied. His so called friends used to tease him whenever he stammered. He used to fight back with the situation but was difficult to release all the frustration. As a result, he used to show his anger at home. He used to break glasses, showpieces, throw water bottles, even broke TV and refrigerator because of his anger and became short tempered.

As he grew up, stammering decreased a bit or can say that he had learned few ways of hiding his problem. He considerably stopped saying those words which were not coming accurately from his mouth. He used to watch TV all day long because tv didn’t bully him. Vaibhav was not studious at all. During 7th or 8th standard, he made bunch of good friends, around 10 in number. They used to beat or fight with guys who said anything bad or tried to bully him. Gradually with time, he started to get mingle with people. He used to crack jokes and make other students of his class laugh, specially girls with whom he gets along easily. There are some, who don’t judge people. He started wearing low waist jeans, make spikes and all, thinking that this was all cool.

His stammering decreased noticeably till 12th but he was more prominent in stuttering.

After intermediate, he still had a fear of being a subject to make fun of. So, he decided to opt a course with no college i.e. Charted Accountancy which was out of his reach. He didn’t even clear Common Profiency Test, CPT. Failing in CPT, he dropped a year and gave an entrance exam of Bachelor’s of Journalism and Mass Communication, BJMC and finally got selected in a reputed college without having any aim in his head. In his early days of college, some people noticed his speech issue and point it out but it didn’t bother him as he was used to it. And he started figuring out more ways to hide his issue.  So, after 20 days of college, there was Mr and Miss Fresher’s audition. He gave audition with his own handwritten script and got selected for the main event to perform in front of 600 people. Since the time of his performance was more than the time decided by the organisers, he, unfortunately, wasn’t selected. But seeing his script, they asked him to perform for 10 mins on stage. Getting the chance, he agreed. It was for the first time that he was performing on stage and that too in front of a huge audience. He figured an easy way to hide his problem, i.e., to talk slowly and remove those jargons which are not easy to say and if they are important, either replace them with other words or to speak them in a more denser voice with faster pace.

This was the time when he went on stage and started saying things, faking his confidence without making proper eye contact with audience. But the things changed when there were so many applauses, so many laughs. He felt nervous as well as enjoying at the same place. He performed for 13 mins.

“My first performance on the stage was the best thing that has ever happened to me“, says Vaibhav Arora.

After this he never stopped and continuously performed at various events. He also mentioned that at his second performance there was a pindrop silence but he was confident enough as he got legit hacks to hide his tongue tie issue. Stammering has decreased a lot. Now, people punctuate him for speaking so much to which Vaibhav replies that he is enjoying it. Talking about his accomplishments, his stand up comedy made him the winner at such places-

He also performed at various events in-

Tongue tie helped him a lot in his life till now, because now he is not afraid of getting insulted anymore( what else than this can happen). Now, he call himself as besti(insult) proof. Performing as a stand up comedian is amazing for him as he gets an adrenaline rush before every performance. He feels extremely sad after a bombing (when audience don’t laughs) on stage and still feels happy after getting laughs.
He performs currently at different open mics. Open mic take place in different places where comics test their new material of jokes to see the response of audience and then judge whether it is funny or not.

‌This is not an end , he is also a photographer and is very famous for his photography. One can easily connect with him on Facebook or Instagram : Delhiwalla.
This motivating story of this Delhiwalla is very true and directly connects to other people in and around with the same problem. One must not feel bad or shameful at this is not a sin. This can be your strength but only if you want it to become your strength as Vaibhav Arora made it and still making. So, go ahead and enjoy your life.