This movie directed by Meghna Gulzar and produced by Karan Johar has Alia Bhatt and Vicky Kaushal in the led roles. It is about an Indian spy who gets married to a boy of Pakistani origin during the war between India and Pakistan in 1971.

The movie is adaptation of a novel written by Harinder Sikka. The name of the novel is Calling Sehmat. Actress Alia Bhatt and Vicky Kaushal will be seen in lead roles. The movie is about an Indian spy who ties the knot with a boy of Pakistan when Indo-Pak war took place in 1971. The backdrop of partition is there in the flick and glimpses of the dark time during partition when hundreds of families and people were killed mercilessly will hopefully flash in the movie. 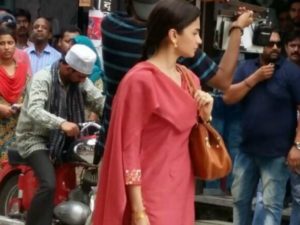 Alia Bhatt was spotted in a shoot for ‘Raazi’ in which her look is exactly one that a person could think of a typical Kashmiri girl. Beauty with simplicity, a long suit and a common hairdo with straight plates was the costume in which the actress was seen while shooting. The official first look will soon be released but by the aforementioned appearance we can get the idea of what her look in the film could possibly be like!

The trailer of the film is yet awaited. 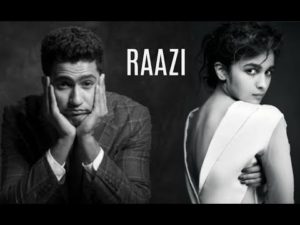 The date for release is 11 May 2018. In this film Alia is playing a role which has never been portrayed by her and this has gathered much intrigued about the film. The interesting part of the film is male actor Vicky Kaushal who has proved his mettle with Neeraj Ghaywaan’s ‘Masaan’ which was released in 2015. The powerhouse performance given by the actor has increased expectations for the viewers. Ace director Meghna Gulzar is hopefully going to deliver what her fans expect from her in this flick!