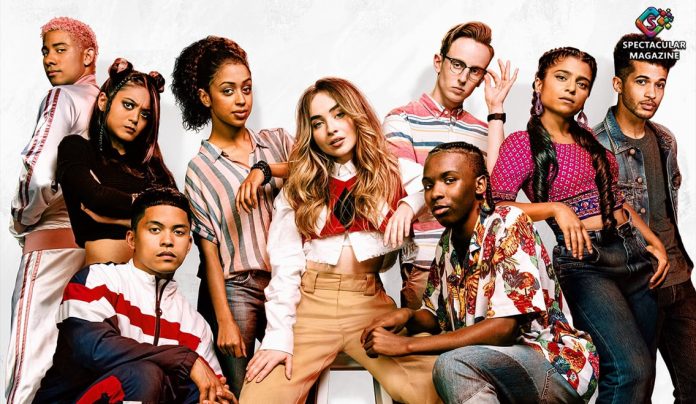 Ever since I heard of the new coming of age rom-com Work It, I knew I had to watch it. With my proclivity for rom coms and teenage obsession with Liza Koshy, I had built up expectations. Expectations which were met, and then they weren’t. With vibrant colours and cinematography coupled with Jordan Fischer’s and Sabrina Carpenter’s sizzling chemistry, Work It really builds you up. And then, in the end, it quite inevitably leaves you feeling incomplete. And not really in the good way. So buckle up, as I give you the first look on teenage rom-com/coming of age Netflix original Work It.

Not A Movie For Technicalities.

A common strain witnessed with movies delving into the rom-com category is the age misappropriation.  While I believe it is to keep viewers from being disgusted by sexual or romantic notions between kids who still look like they whine about not being able to drive, there isn’t anything we can do to stop it. We have actors past 25 years playing characters that are applying for college. And that is exactly the vibe Sabrina Carpenter and Liza Koshy give off. While petite and quite passable for the young adult group, they don’t really fit the cut for ‘actors playing their age’. However, I chose to skim past that miscalculation and actually delve into the movie.

Work It is a movie all about dance. Performances, determination, the infamous team spirit, Work It has all the ingredients to a successful teenage dance movie. The only thing they don’t have is continuity and the one thing they have but don’t need is plot holes.

Yes, Work It is essentially a feel good movie. It reinforces in you the belief that not just the ones with angelic moves are capable of dancing. Even misfits who sit behind a computer all day have a shot at being able to create magic in their movements. And while it is a comforting thought, there is a quite obvious stereotype lurking here. And speaking of stereotypes, on to my next sub-heading, Erasure.

It is 2020, and teenager rom-com movies seriously need to get with the times. Having one actor who plays the adversary be cinema-version gay is not done. Neither is the fact that the one black guy in the movie has zero lines for its entirety. Yes, Work It is a movie primarily centered on Sabrina Carpenter, Liza Koshy and Jordan Fisher, but them choosing to ignore BIPOC characters till it suits them is not done. This is me being polite.

People have said before, won’t this remove focus on the main characters of the movie, or that is a movie built just for this representation? And no and no. The main point of showing LGBTQIAP+ and BIPOC characters in a movie is to show that this is real. This is normal. No matter how unrealistic your actual movie is. And a movie is made for the representation of all kinds of people. Because that’s how your movie is giving hope and life to your very very diverse audience. And having a brown girl as your girl Friday is not representation.

Thankfully, The Chemistry Saves The Movie.

I am not going to lie, I went back to watch the dance scenes between Jordan and Sabrina at least twice. While their chemistry could be partially attributed to the music and the lighting, most of it was all them. The scenes they have with each other where they’re doing some form of a tango seriously breathes life into the movie. Sabrina is charming, in the ‘I can’t dance for my life’ sort of way. And Jordan Fisher’s smile carries part of the movie alone. The romance is honestly no-nonsense. You could feel the chemistry between them the first time they meet. And when you would think that the tension would come to a head and get denied as it gets in all dance movies, it actually doesn’t. They do have relationship troubles, but while one is battling an existential crisis, it’s bound to happen.

The Movie Reminds You Too Much Of To All The Boys I Loved.

If you have already watched To All The Boys I’ve Loved Part Two, you would agree with me. While the cinematography is clearly different, some things are just a slap in the face reminding you of the movie. The nursing home, the nursing home decked in lights, hell even the co-protagonist is the same! Well, our consolation is the fact that John Ambrose at least got a new lady love.

A Glass Half Full.

And while I may have criticized the movie to new heights, it does have some redeeming factors. As a previous subscriber and avid follower of Liza Koshy, it was refreshing to see her in a movie with a coherent role. Her dancing was wonderful to watch; her years of progress have given fruit. However, the movie does manage to let me down one last time; right at the very end. Not lingering too much on the details, Quinn’s mom basically grounds Quinn and stops her from going to the Work It dance competition. Surprise surprise. However, she manages to evade her, then gets into a car she barely knows how to drive and sets off.

While it was frankly unrealistic, I was going along with Work It. Everything is fun and exciting until their dance score. After a power-packed performance by the returning champions, The Thunderbirds, you would expect TBD to have a more bedazzling score. I am wholly an amateur in the world of mixtapes and dance performance music, and I’m sure a lot of watchers are too. Hence, having a performance piece which may be exceptional but not more riveting than your rival’s is…not good. I frankly expected TBD to fall short by one point and maybe win on a technicality, again.

Well, for the most part, all is well that ends well. I simply hope that Quinn takes a decision for college from her heart because as a college student, having a 4.0 GPA matters next to nothing once you’re in. And as for me, I won’t be watching Work It again. Well, at least not completely. Those duet dance scenes are still fire.